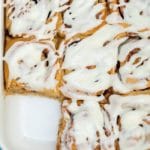 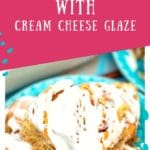 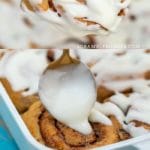 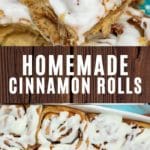 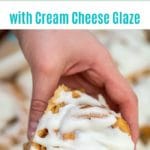 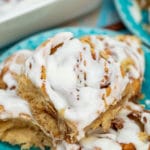 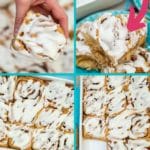 There is nothing like waking up in the morning to that perfect decadent smell of cinnamon and sugar in the oven.  These cinnamon rolls are one of my favorite breakfast recipes, and the addition of cream cheese glaze just brings them up a notch.  A very simple dough with yeast, flour, sugar, and cinnamon comes together easily, and the rich sugar and cinnamon filling melt together in the oven for perfect bites every single time.

When I was a little girl, I knew it was a special day when I woke up on a Sunday morning to the smell of my mama's cinnamon rolls in the oven.  For me, it wasn't just about the delicious glazed rolls, but about the fact that it also meant we were probably having one of her famous pot roasts for lunch.

You see, in our house when mama made a batch of cinnamon rolls, it was because she had leftover dough from making her homemade yeast rolls.  Those rolls were always made when a pot roast was in the oven, and rarely any other time.  The special treat was definitely something I looked forward to having.

So, as I started working on a new recipe to share, this was a must.  While it's a bit different than the one my mom used, it is still delicious. I am sure if she was here, she would give her seal of approval! 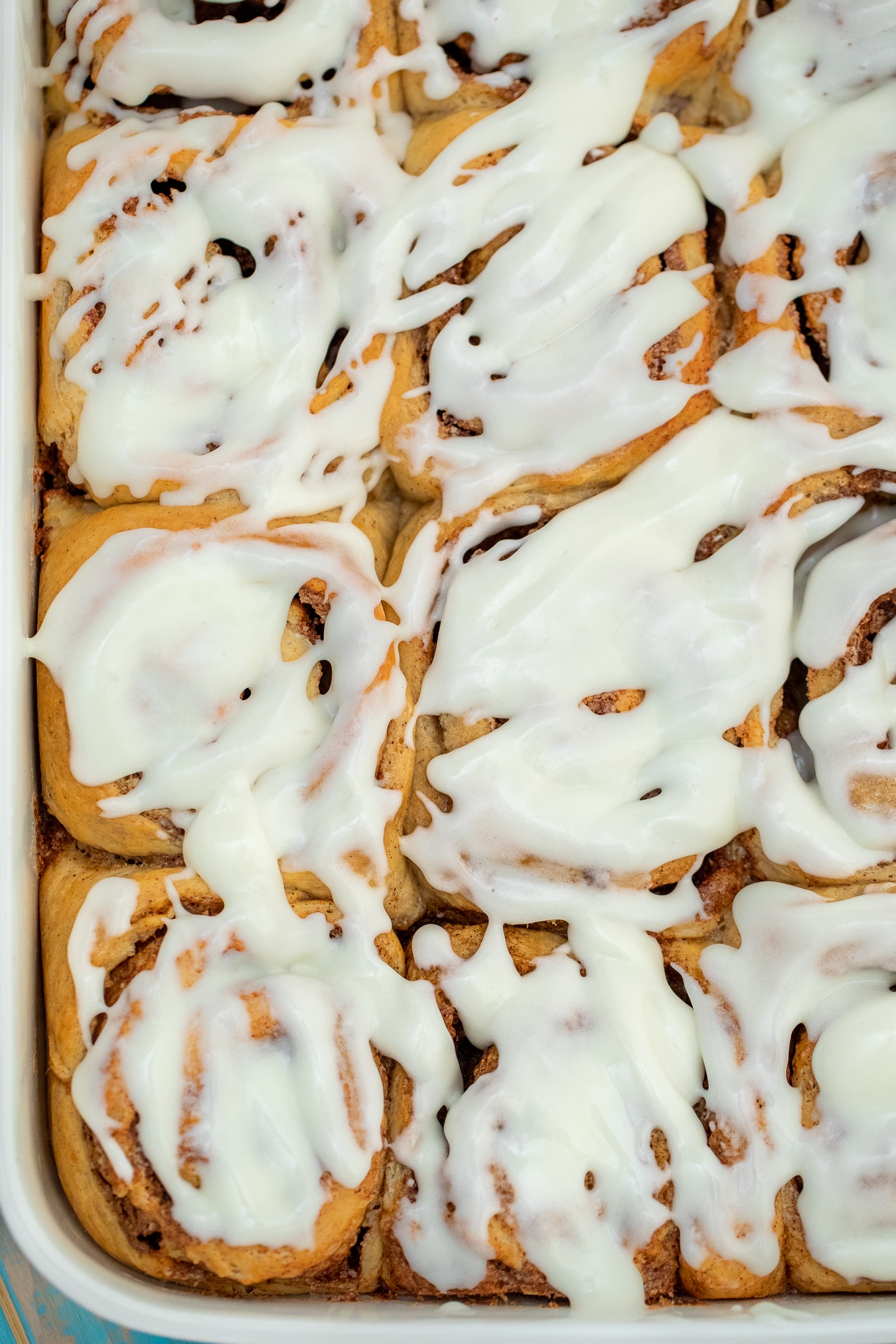 Can I Add Nuts or Raisins?

While I don't add nuts or raisins to my cinnamon rolls, I have seen this added on many occasions.  For me, they aren't really a favorite in this particular sweet bread.

If you like the added crunch or sweetness, feel free to chop some up and put in the rolls.  I recommend sprinkling them over the filling right before you roll the cinnamon rolls to cut. You can also add them to just a few of the rolls by sprinkling them on top just before baking. 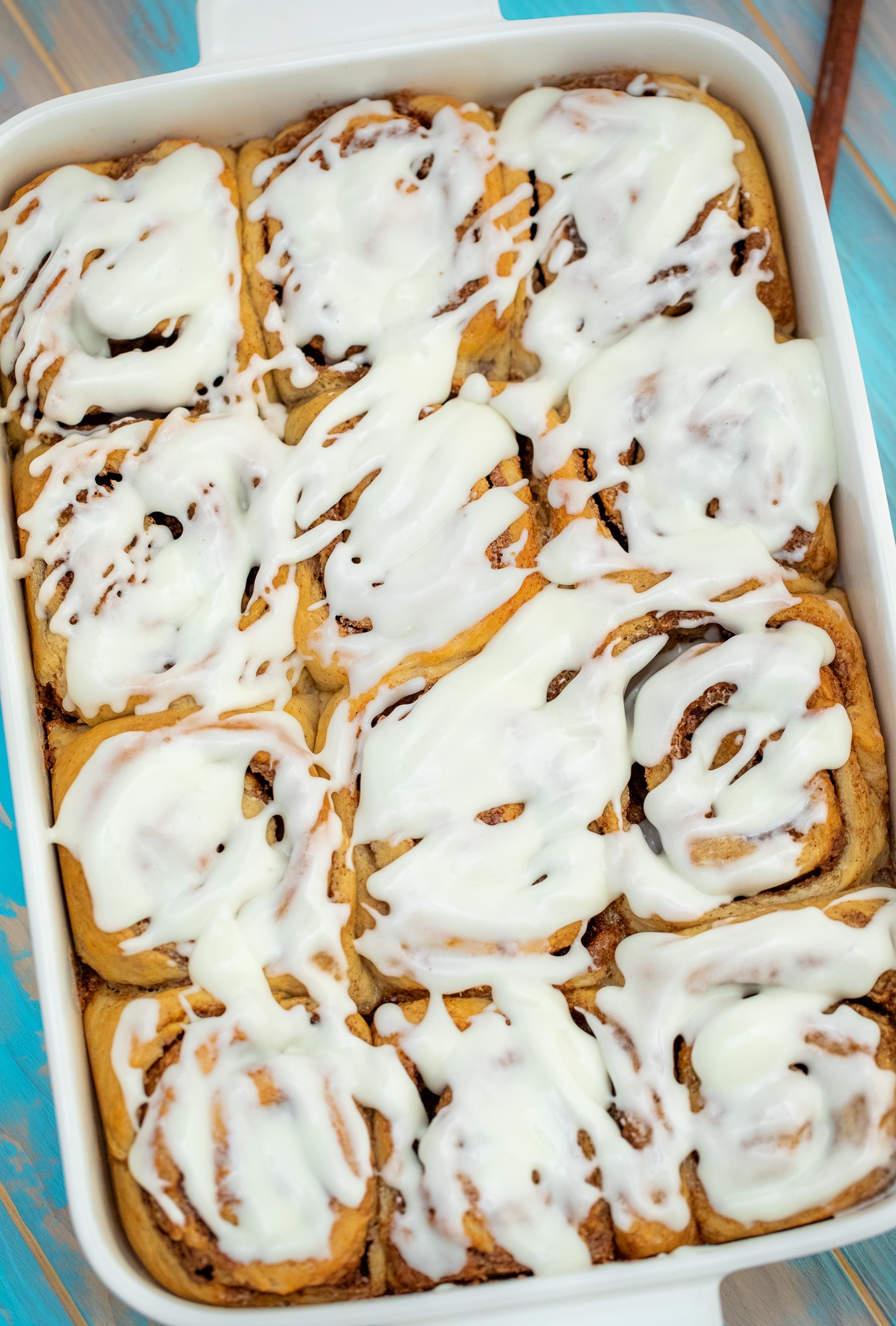 How to Freeze Cinnamon Rolls

This recipe is actually one that works wonderfully in the freezer!  If you want to make extra batches in advance, you can do them in two ways to freeze for future breakfasts.

(1) Follow the directions up to cutting the cinnamon rolls.  Cut them and instead of putting into your regular baking dish, place them into a disposable aluminum foil pan.  This frees up your regular dish and makes it ideal for storing in the freezer.  Then, wrap in plastic wrap, and top with a layer of aluminum foil.  Top that with a label of what the recipe is, the date it was made, and cooking directions. Simply pop them from the freezer to thaw overnight, let them rise as normal, and then bake.

(2) Cook the cinnamon rolls as normal, allow them to cool completely and put into storage bags that have been labeled and dated.  When ready to have one later, whip up a bit of icing, and reheat in the microwave or oven before serving with a drizzle of icing. 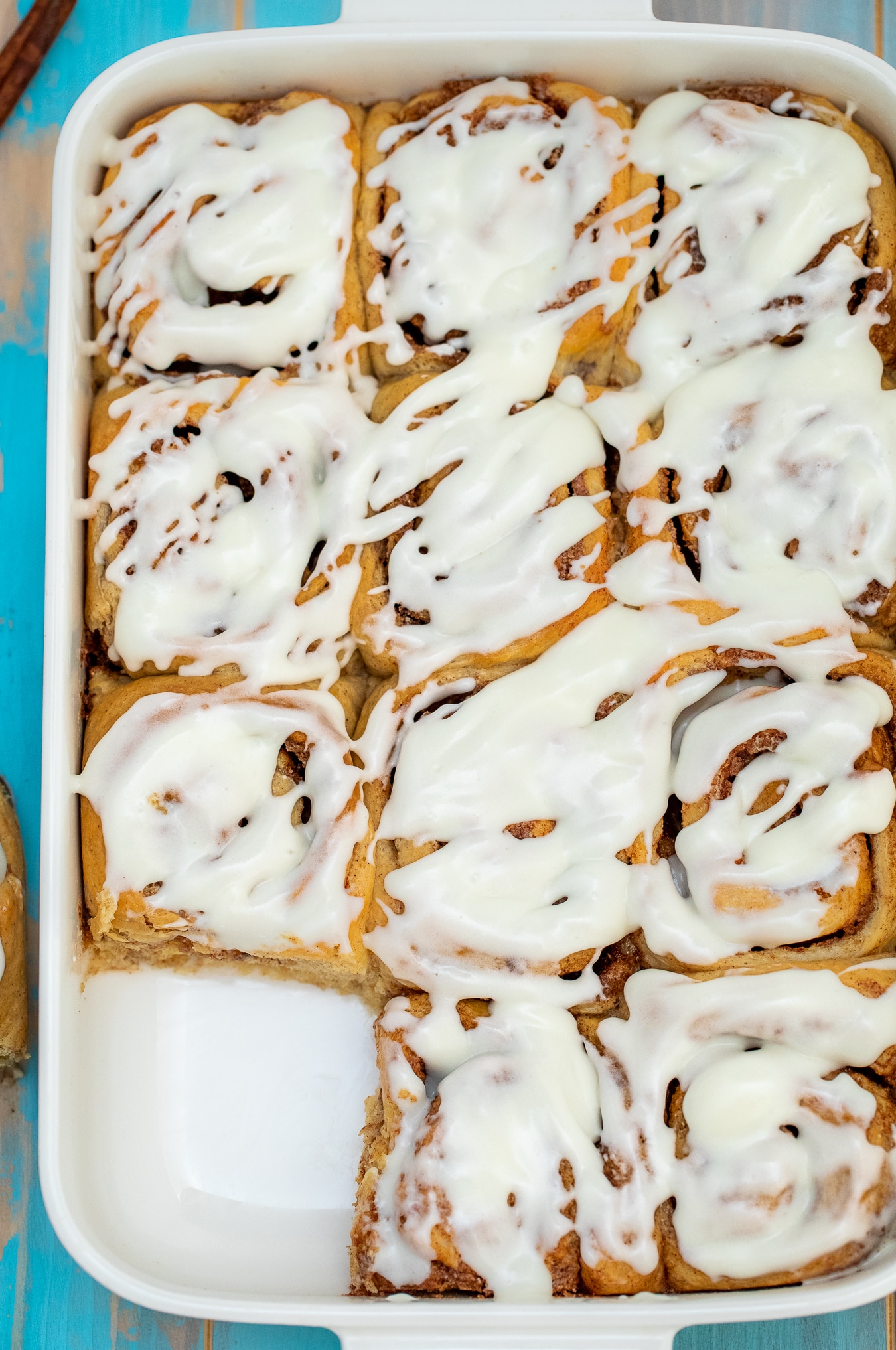 How Long do Cinnamon Rolls Last?

In my house, they last only as long as it takes to eat them.  We rarely have any leftovers!  That said, I know others don't have a house full of teenage boys to feed.

In the freezer, they are good for up to 4 months when wrapped and stored appropriately. 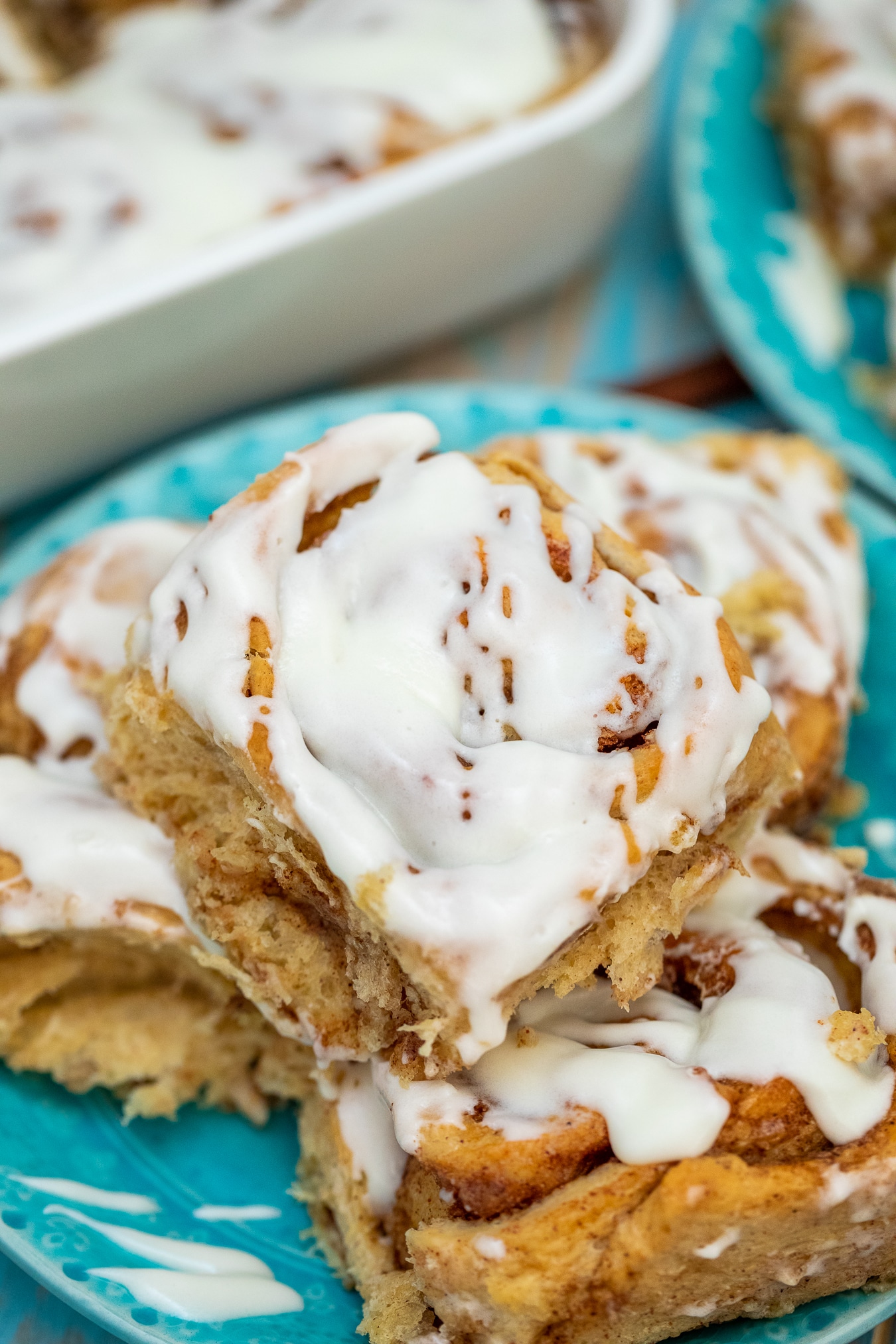 How to Make Cinnamon Rolls

Start by combining your yeast, warm milk, and sugar to a bowl or measuring cup and mix then set aside to bloom.

In a separate bowl, you will combine the flour, sugar, salt, and cinnamon together and mix until well combined.  You can also use a food processor or stand mixer if desired.

Now, you will cut in the butter, and mix until the flour and butter mixture resembles small pea-sized bits.

Next, you will mix in the yeast mixture and the eggs until it forms a sticky dough.

Turn the dough out onto a floured surface and knead with additional flour for 3-4 minutes or until the dough becomes smooth. 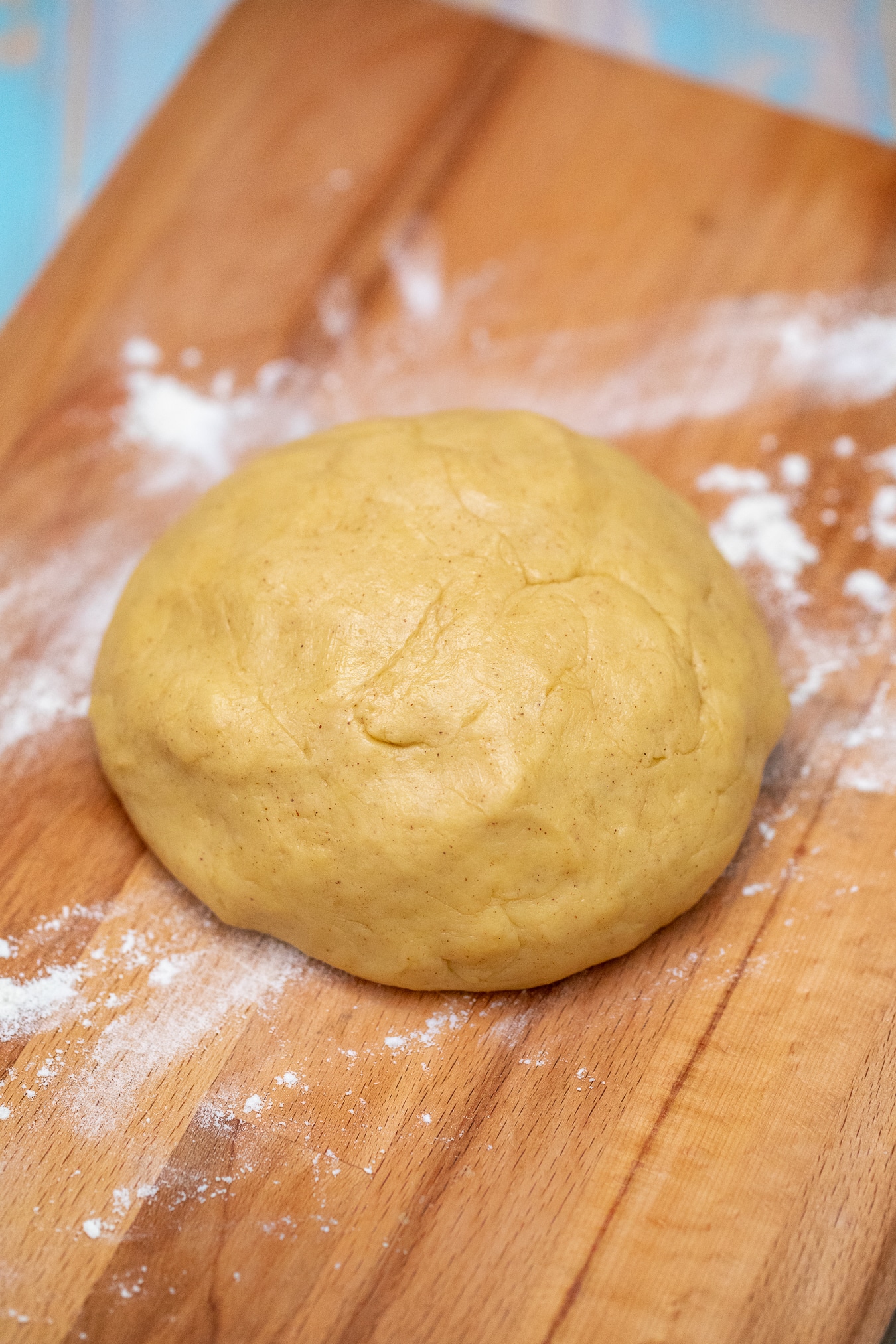 Now, you will put the dough in an oiled or buttered bowl, and cover with a damp towel and allow to double in size.  This usually takes around 1 ½-2 hours. 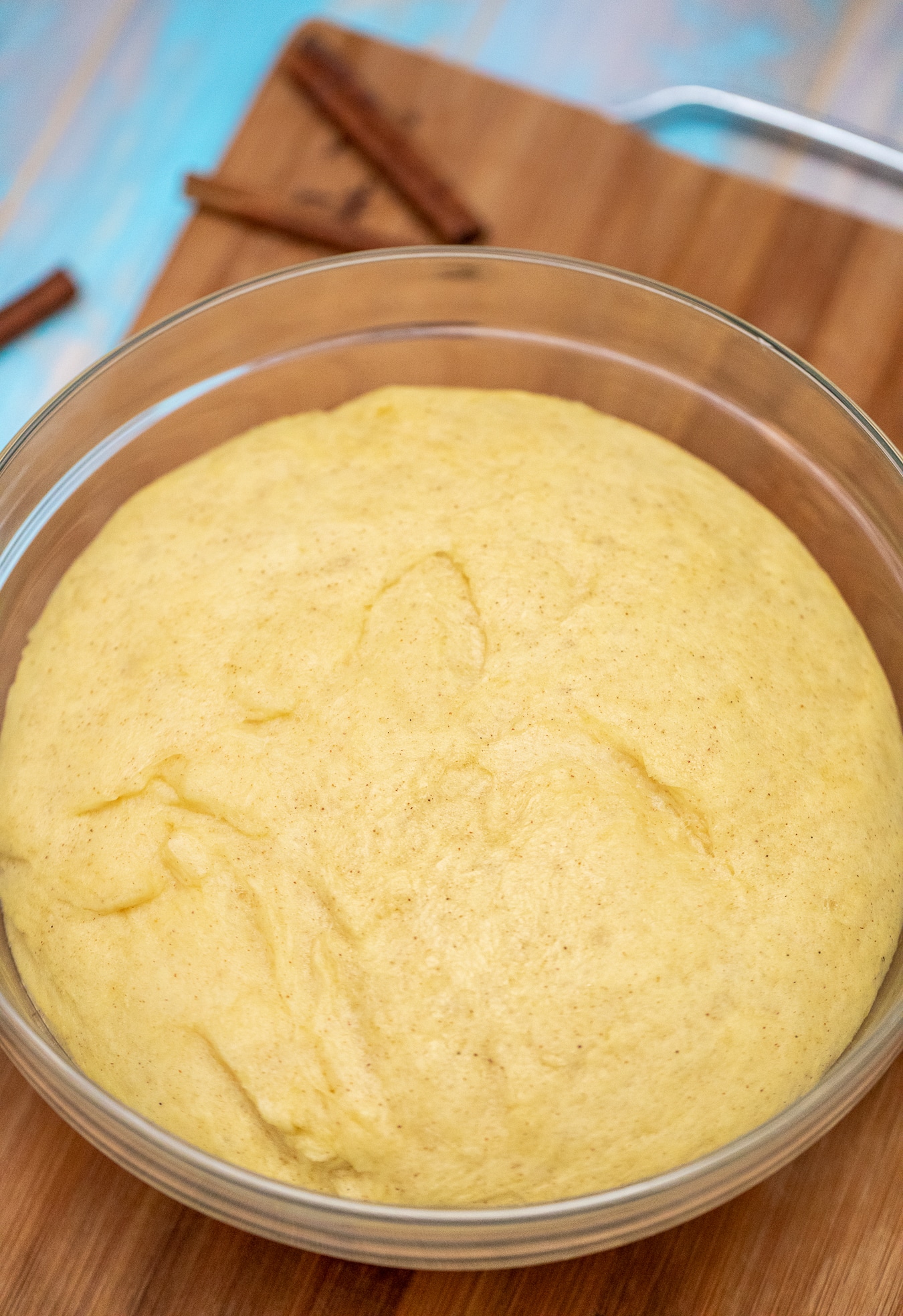 Once the dough has doubled in size, you will put it back onto a floured surface and roll to ¼" thick.

In a small bowl, melt butter, cinnamon, sugar, cardamom, and nutmeg together until it is blended.  If it is too thin to spread, set it aside for a few minutes to allow the butter to firm back up a bit.

Now, you will spread the cinnamon butter mixture over the dough in a thin even layer. 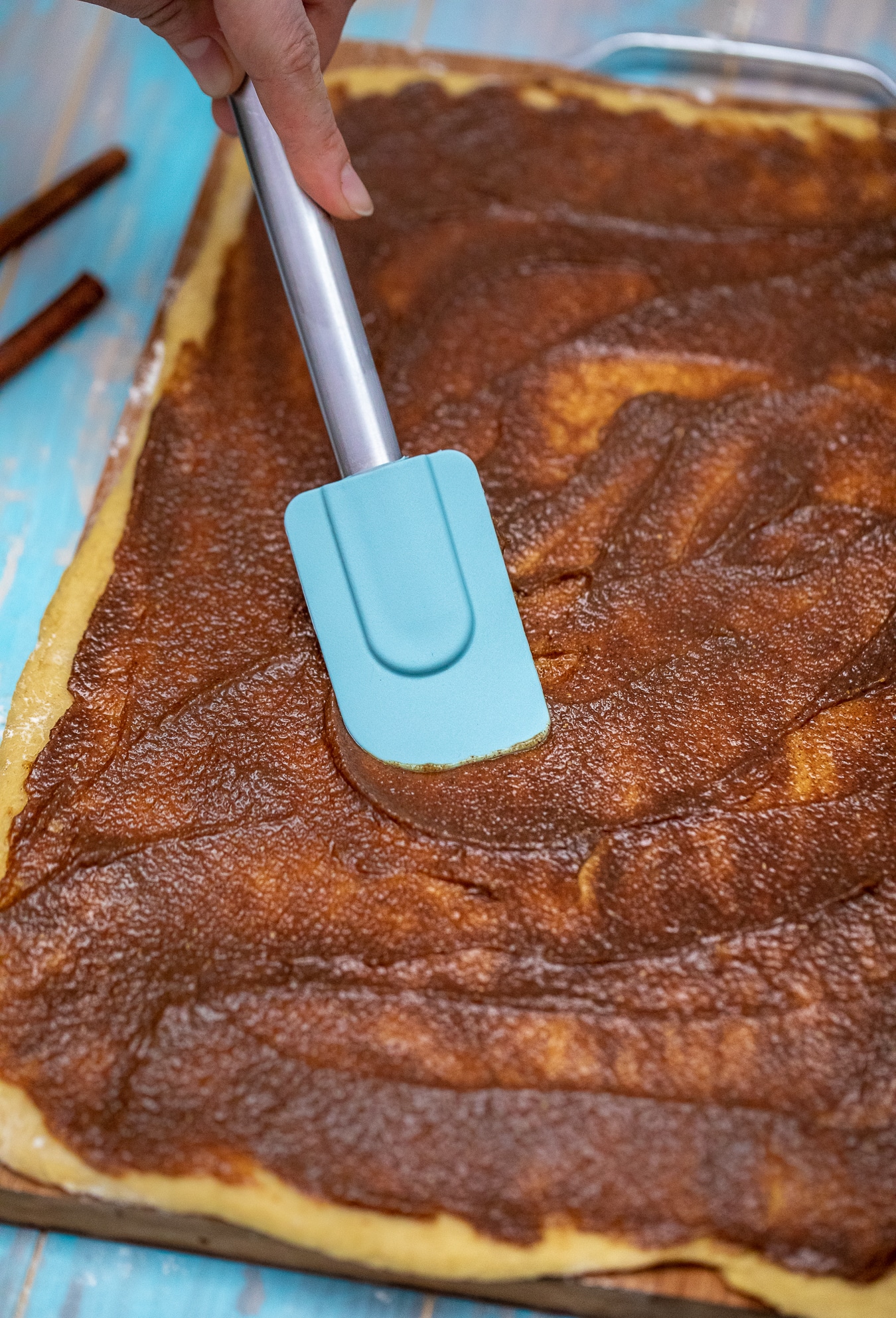 Starting closest to you, you will start rolling the dough away from yourself keeping it tight against itself and the filling inside the roll.

When the roll is ready, you will then cut into 12 even pieces.

Place the rolls into a buttered or greased baking dish and cover with a damp towel to rise again for another 30 minutes. 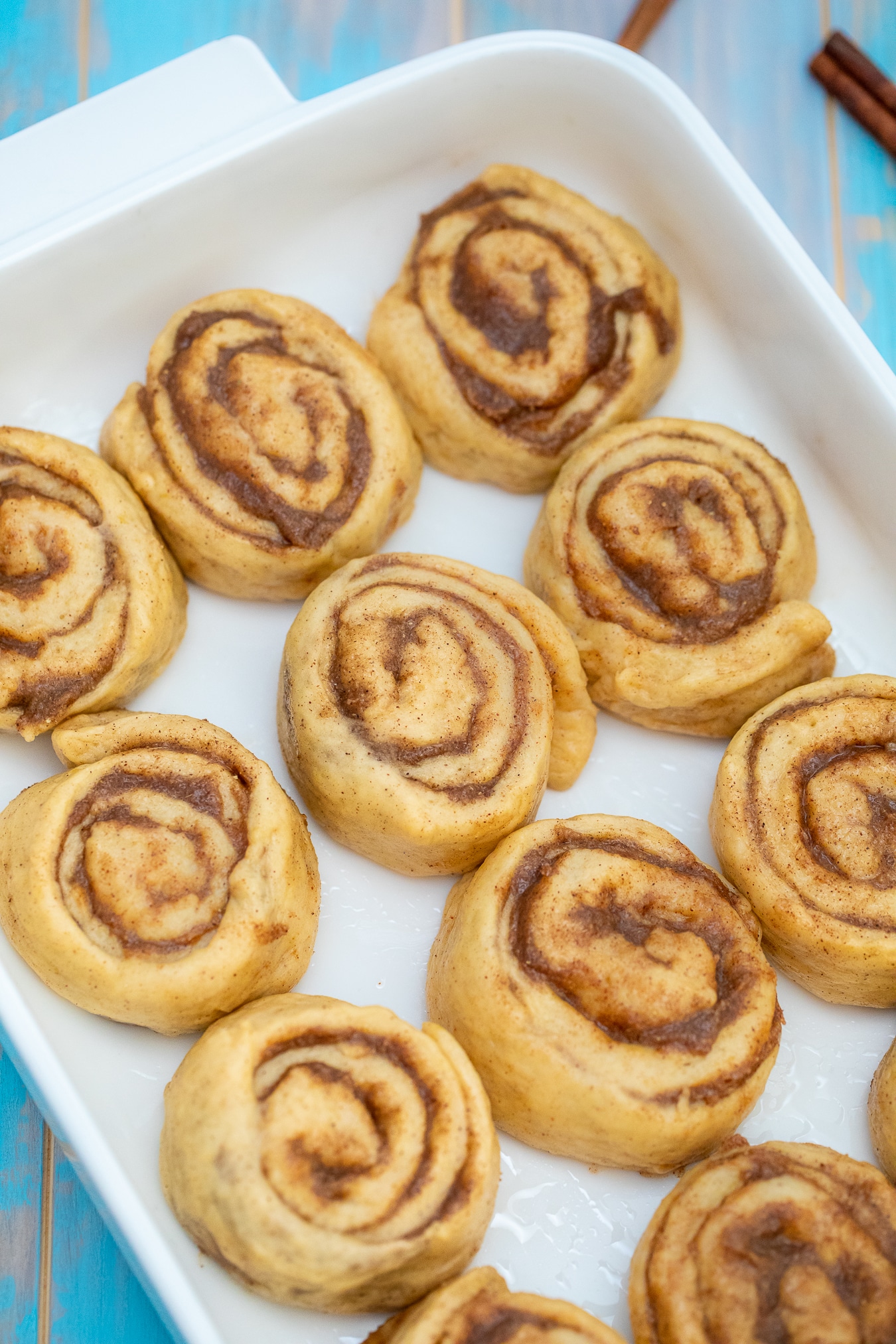 About 15 minutes into the time they are raising, you will preheat your oven.

When ready to put them into the oven, spoon extra heavy cream over the tops of them, then put into the oven and bake for 25-30 minutes or until risen, golden brown, and cooked through. 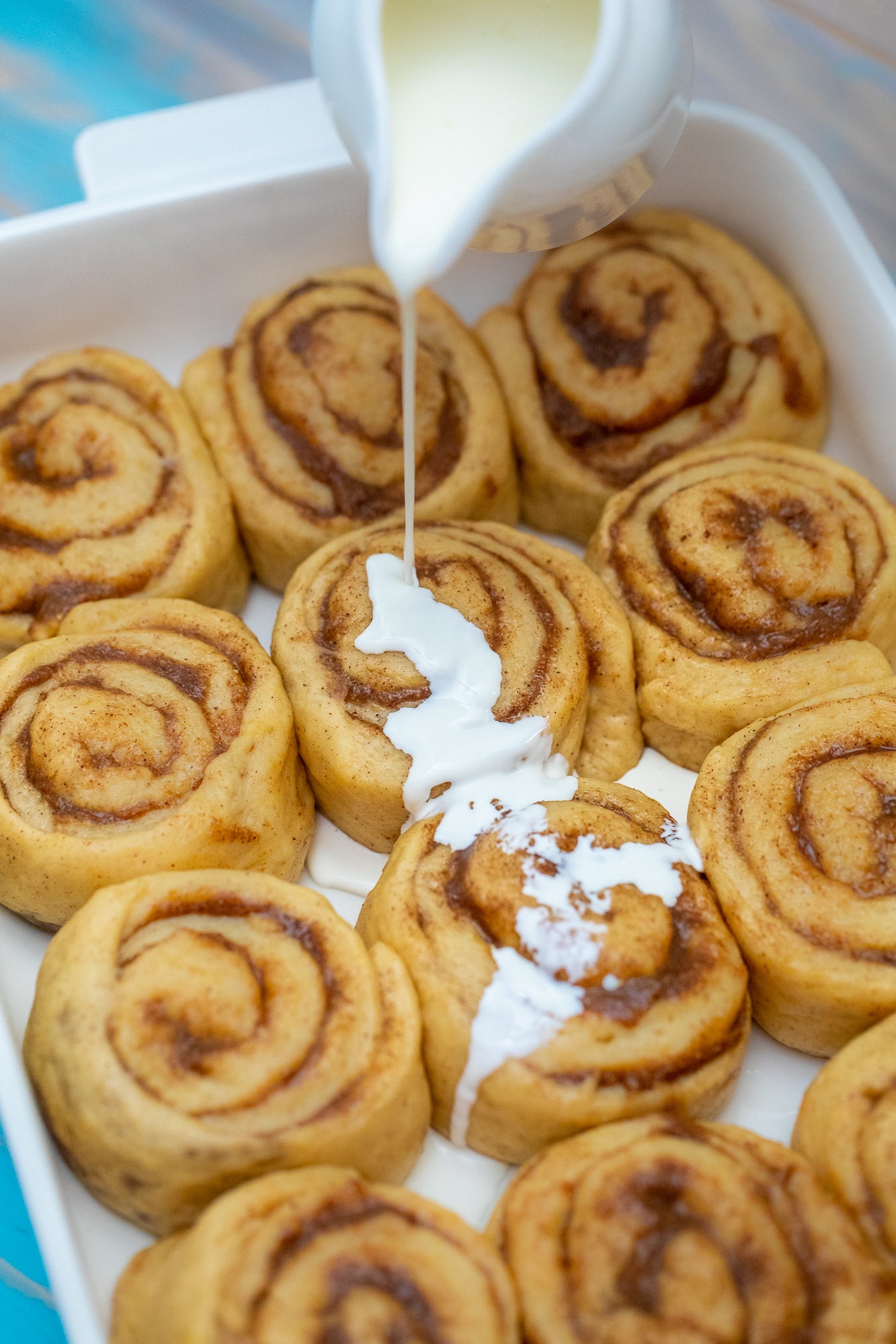 How to Make Icing for Cinnamon Rolls

Mix in powdered sugar and salt until smooth, adding additional cream if needed until the texture you prefer.

Remove the rolls from the oven, and allow to cool before spreading the cream cheese glaze over the top and serving! 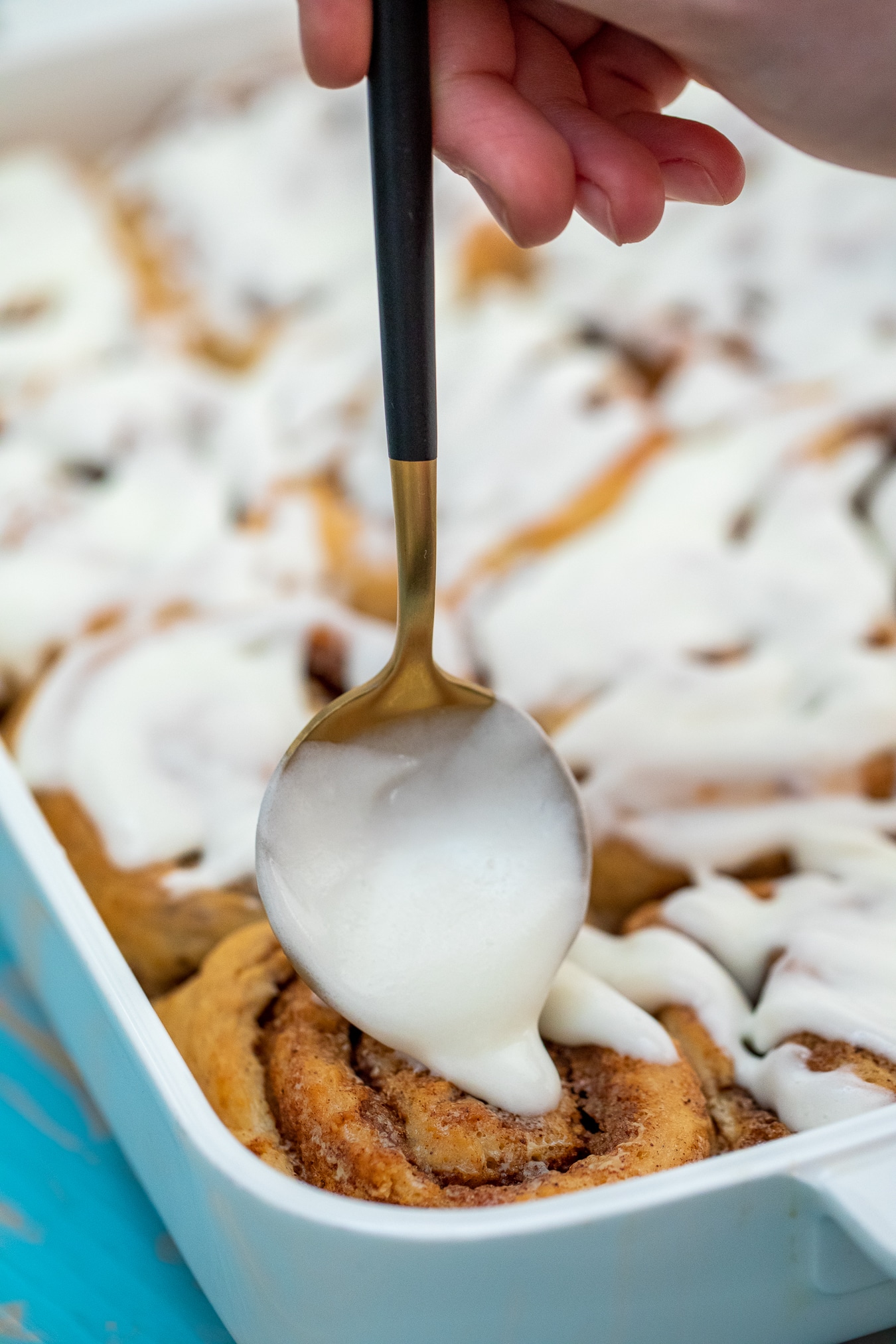 How to Make Icing for Cinnamon Rolls

Add additional nuts, raisins, or extra butter and sugar to the filling if desired.