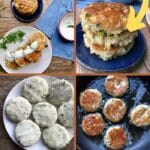 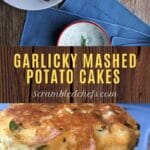 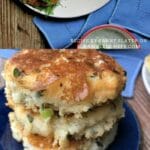 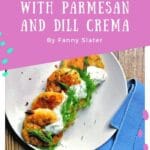 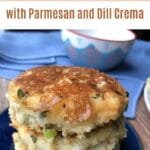 Growing up, I had a home delivery service that transported mashed potatoes to the foot of my bed. 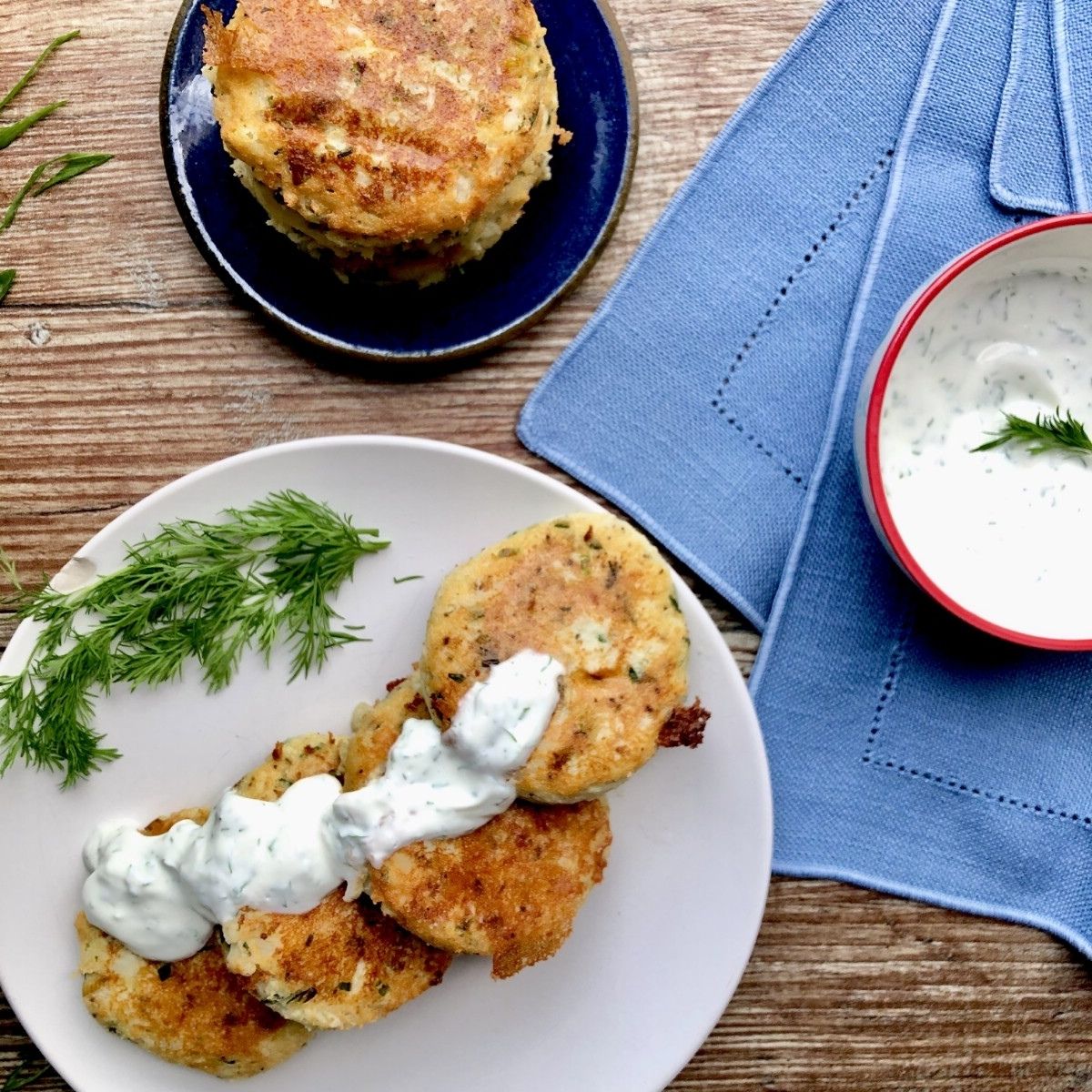 More nights of my childhood than I can remember, the earthy aroma of boiling potatoes and the nutty smell of slow-roasted garlic would travel upstairs. And then so would my dad. Three spoons in hand, he would voyage from room-to-room offering my mom, sister, and me samples of the meal that was to come.

This routine left me with countless delicious memories containing no more than a mouthful. I remember the juicy single forkfuls of herby roast chicken. I remember the sweet solitary scraps of crab that had fallen astray from their cakes.

But most of all, I remember the mashed potatoes.

One fluffy spoonful of my dad’s sensationally silken, butter-whipped mash, and the tensions of the day would fade. Not that I carried much stress as a fourteen-year-old other than anxiously awaiting the release of Britney’s new album or wondering if Reid Davis would ask me to dance at my Bat Mitzvah.

No matter what trivial concerns scratched the surface of my teenage brain, the moment I heard my dad’s footsteps—I knew that the only thing that mattered was savoring that single bite of mashed potatoes. 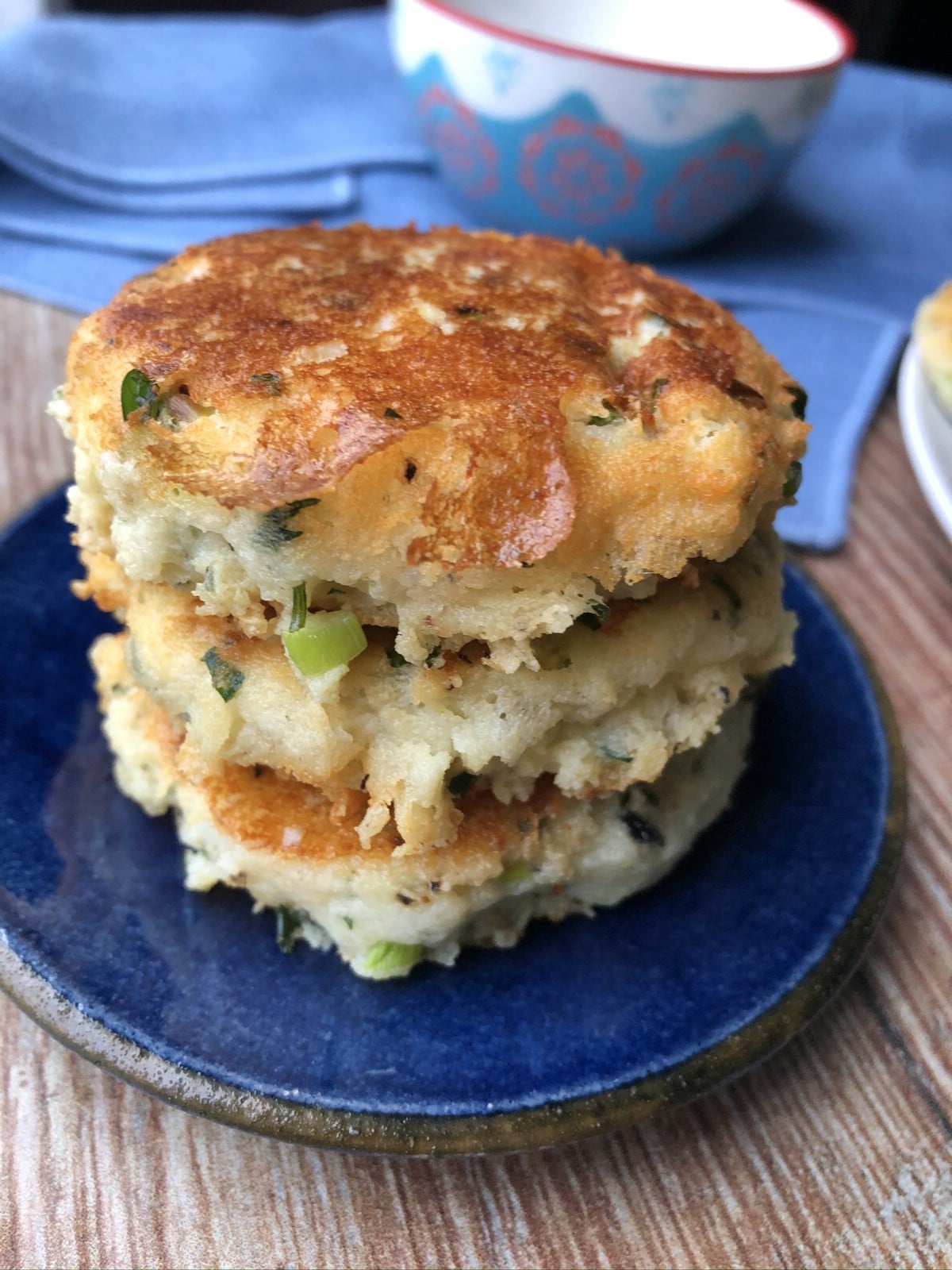 At a younger age, my culinary curiosity was often sidetracked by alternate activities like brushing our fuzzy Persian cats or scootering down the street with my best friend John for a submarine sandwich.

Though I guess the latter still resulted in food.

It wasn’t until my early 20s that I began spending more time in the kitchen studying my dad’s masterpiece meals. Before I knew it, he was offered me the prestigious potato smasher and trusting me to take the reins.

By crushing and seasoning the spuds and playing a key role in our dinner, I felt a sense of importance in the kitchen. This led to me to have faith in my palate and ultimately create my very own imaginative concoctions for all of the world to sample. 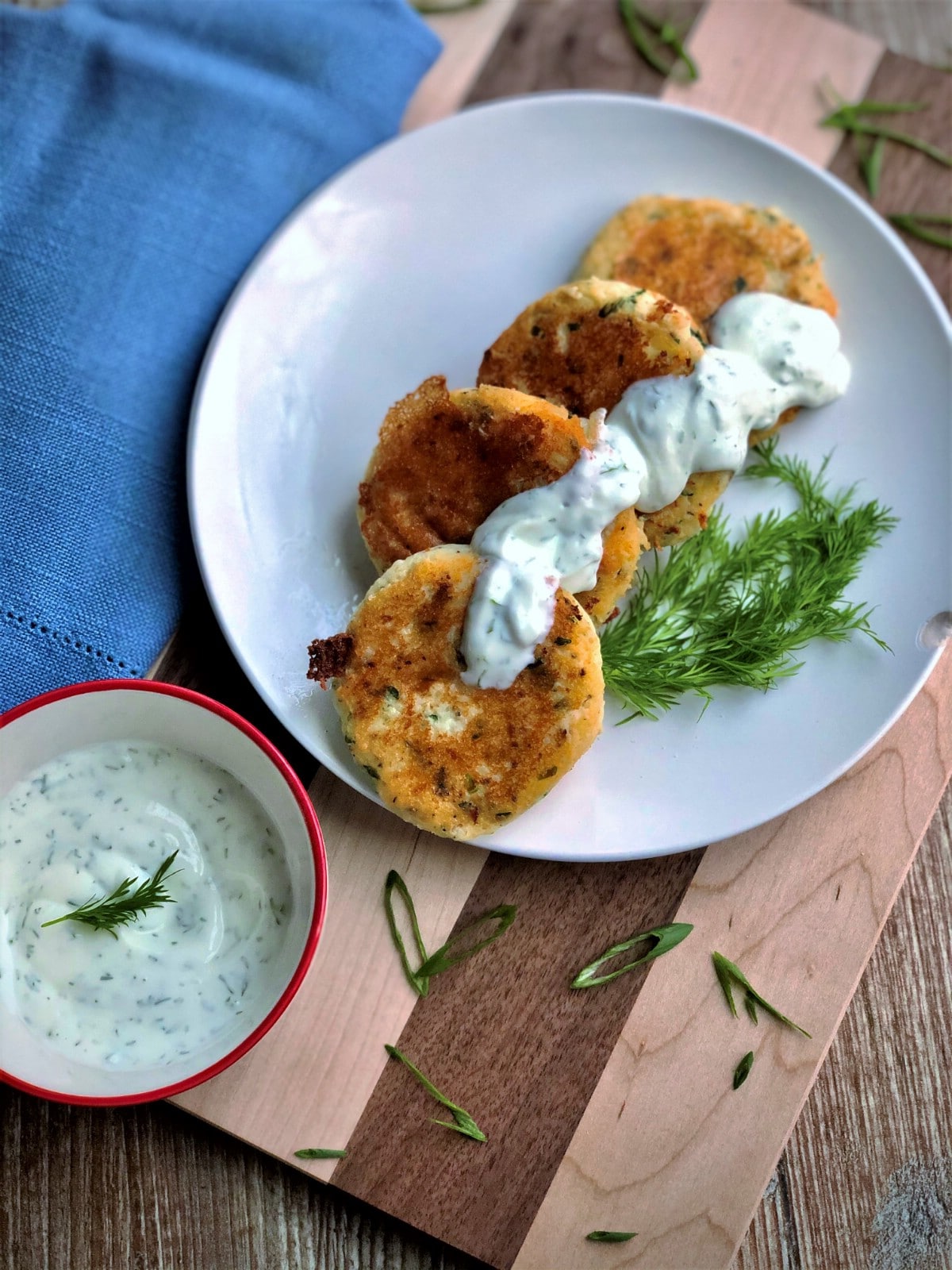 It sounds like a strange concept. A cake made of mashed potatoes? Do you get balloons? Do you put candles in it? Do you cover it with bacon and sour cream and make a wish?

Okay, okay. You’re all invited to my next birthday party.

Think of the construction of a potato cake like this: you take an already-perfect savory starch, heap on even more aromatics (see: sharp, salty parmesan, fresh, grassy herbs, and garlic), form it into a patty, then fry it until your nose is like, “Oh wow. Smell what we did.”

Unless you literally top what I just described with a garbage can, there’s no way things are going to turn out poorly. 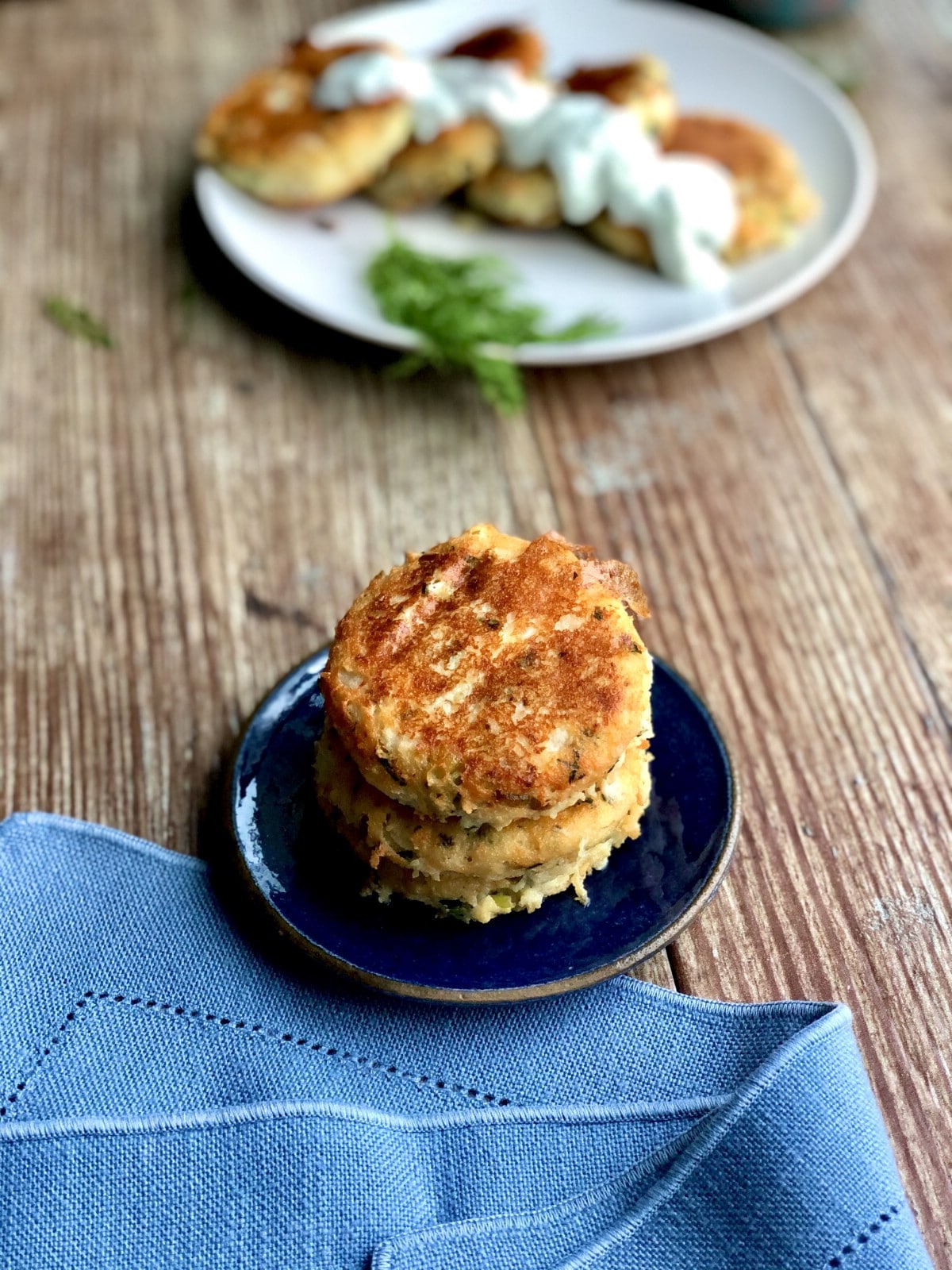 Did the word “fried” scare you off? Let’s back up.

All kinds of patties, cakes, fritters, etc. are often “shallow fried.” Though this cooking technique still surrounds said items in a pool of oil, the method doesn’t involve dunking (and entirely covering) the food like deep frying does.

Many of the best things in life—crab cakes, zucchini fritters, latkes—are shallow fried. Don’t fear the shallow frying. It’s the right thing to do. Also, the less oil you use in this scenario—the less evenly your cakes will brown. 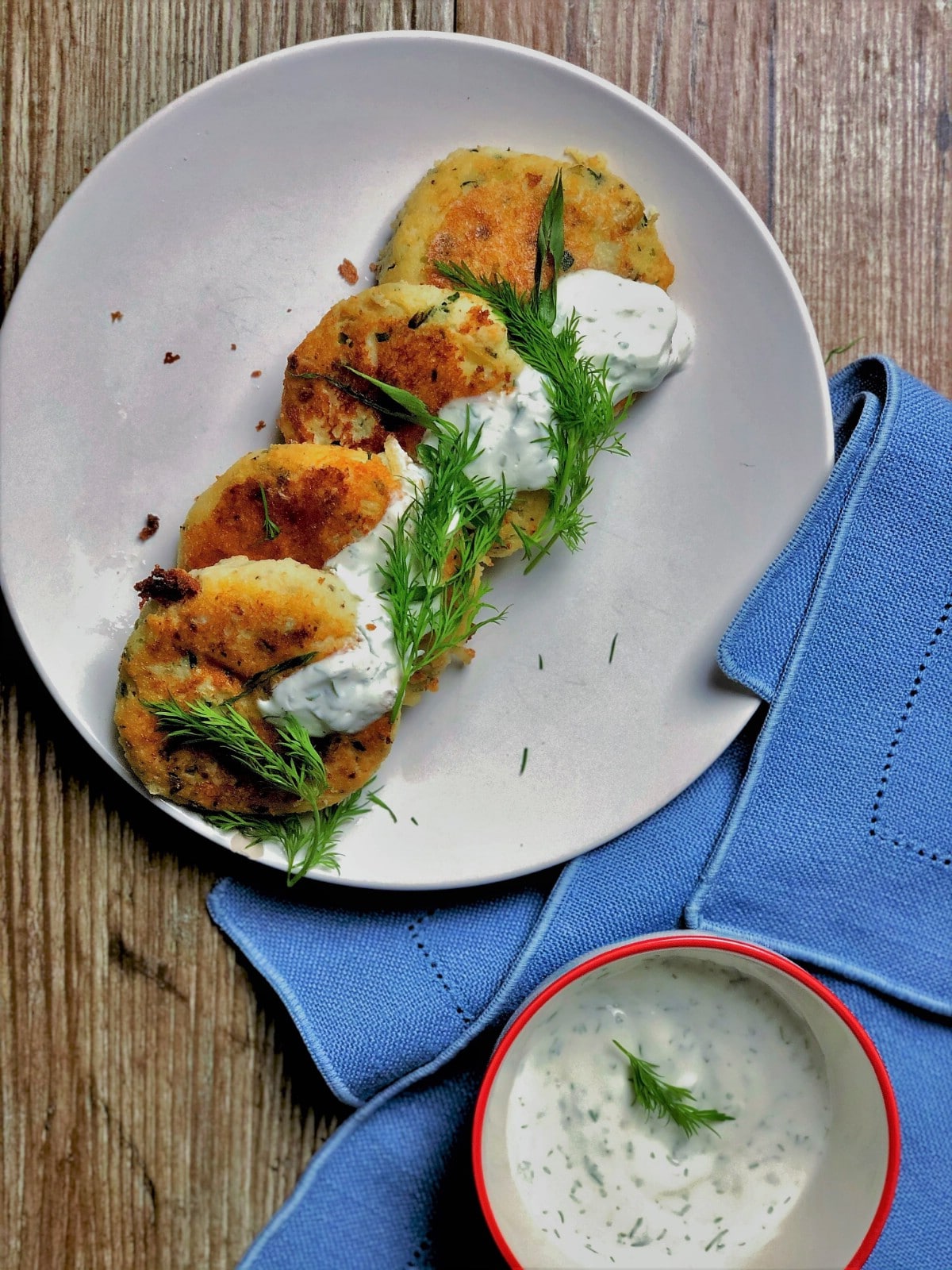 As far as binders go, you don’t need a massive amount of flour and there’s not a breadcrumb in sight. The egg creates stability and the parmesan keeps things sticky, salty, and wonderful.

The garlic is pungent and bold in the best way while the herbs provide balance and freshness. I believe dill and potatoes are a matchmade in heaven, but if you have another idea for a quick creamy sauce to take these cakes to the next level—by all means, drizzle to your heart’s content.

Your stomach will thank you, and sampling a spoonful is always recommended. Just ask my dad.

Step 1 – Chop the Herbs and Aromatics

Mince the garlic, and chop the parsley, thyme, green onions, and dill. Lightly beat the egg. 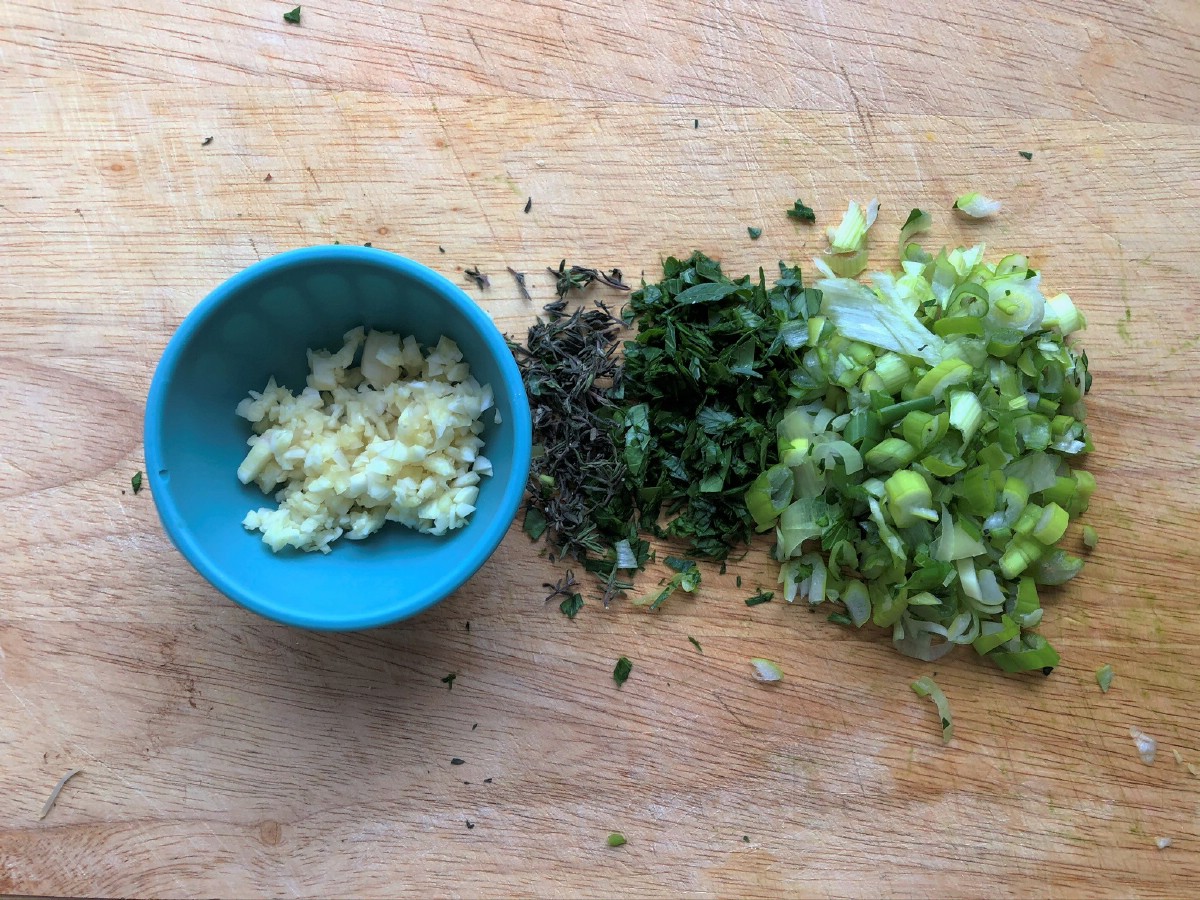 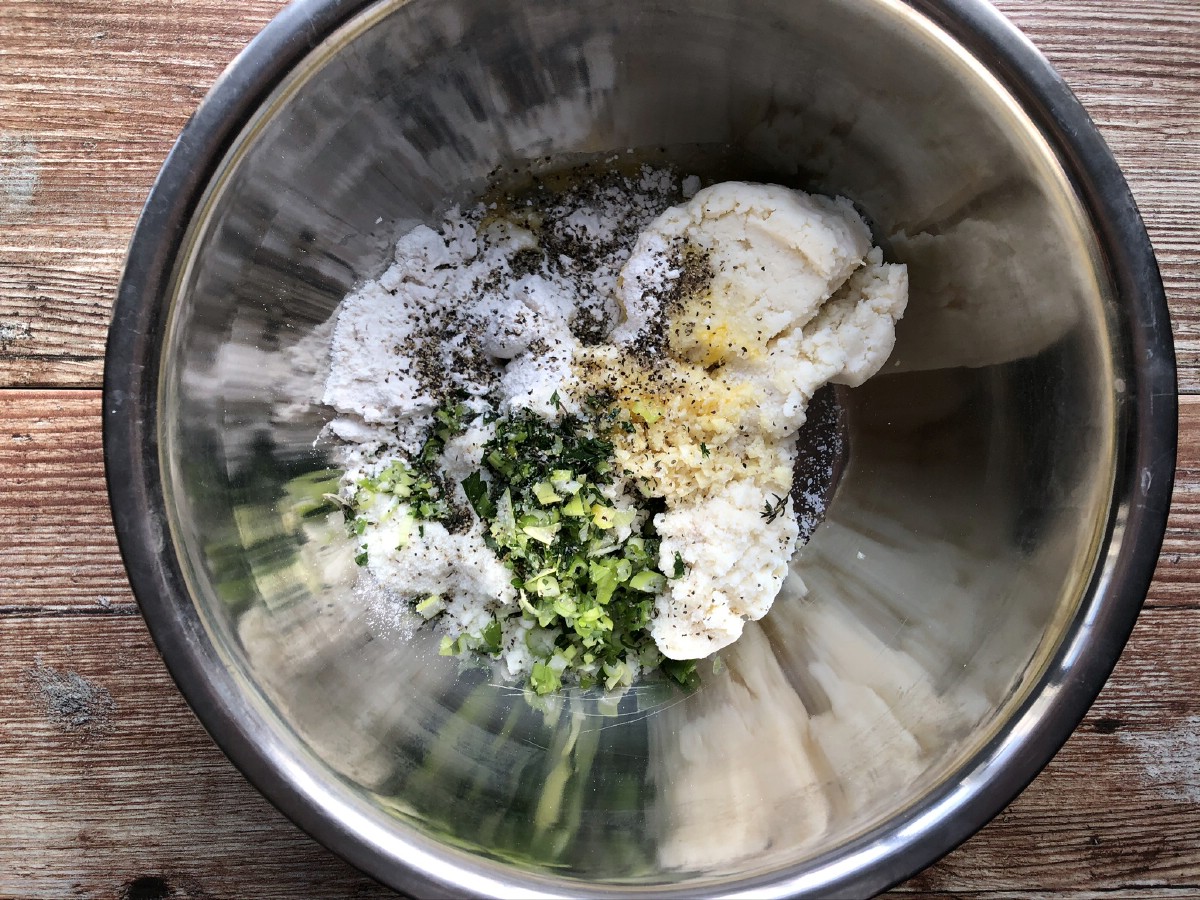 Place the remaining ¼ cup of parmesan in a wide shallow bowl. Using ¼ cup as your guide (and oiling the measuring cup to avoid sticking if necessary), divide the potato mixture into 8-10 equal portions and form them into rounded, flattened patties. 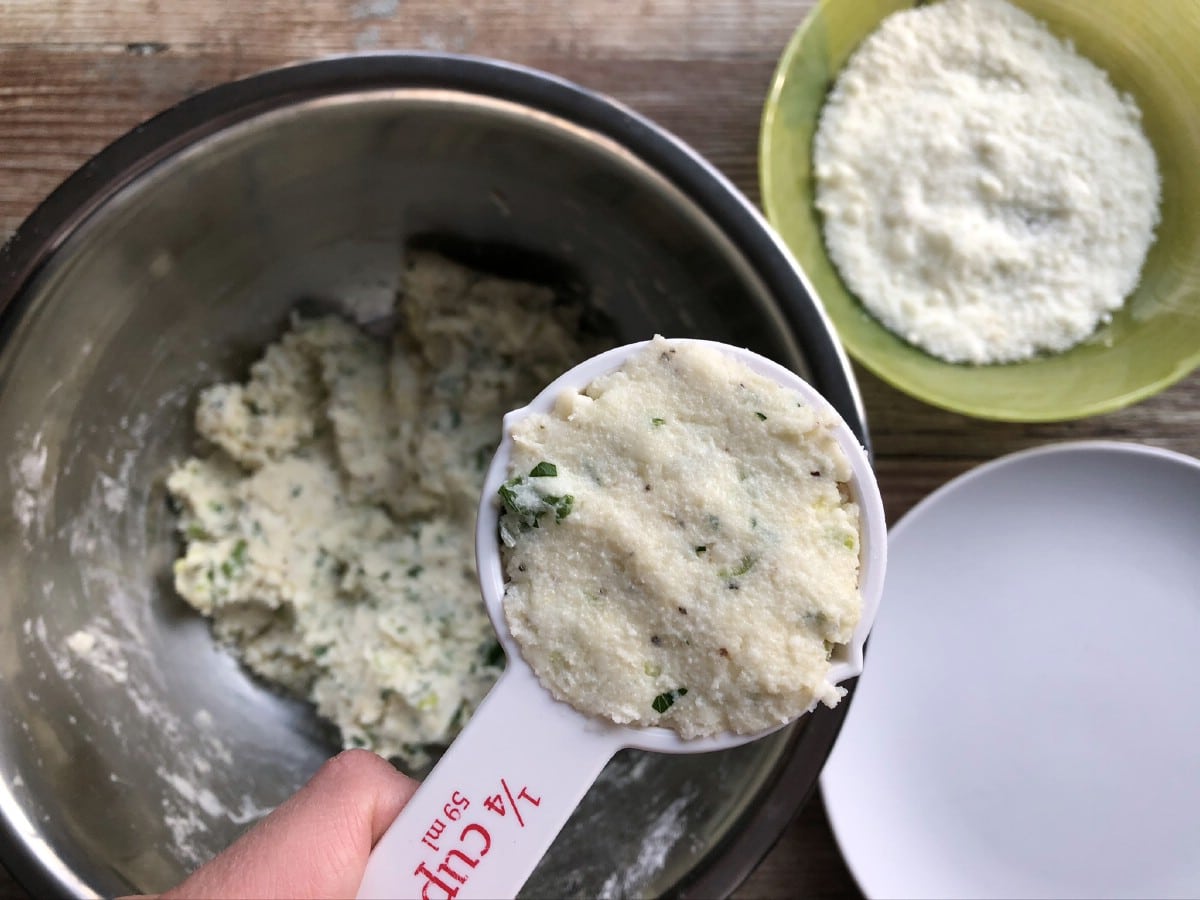 Dredge the potato cakes in the parmesan and then refrigerate for at least 20 minutes. You can also do this several hours ahead of time. The longer the patties are refrigerated, the better they’ll hold together. 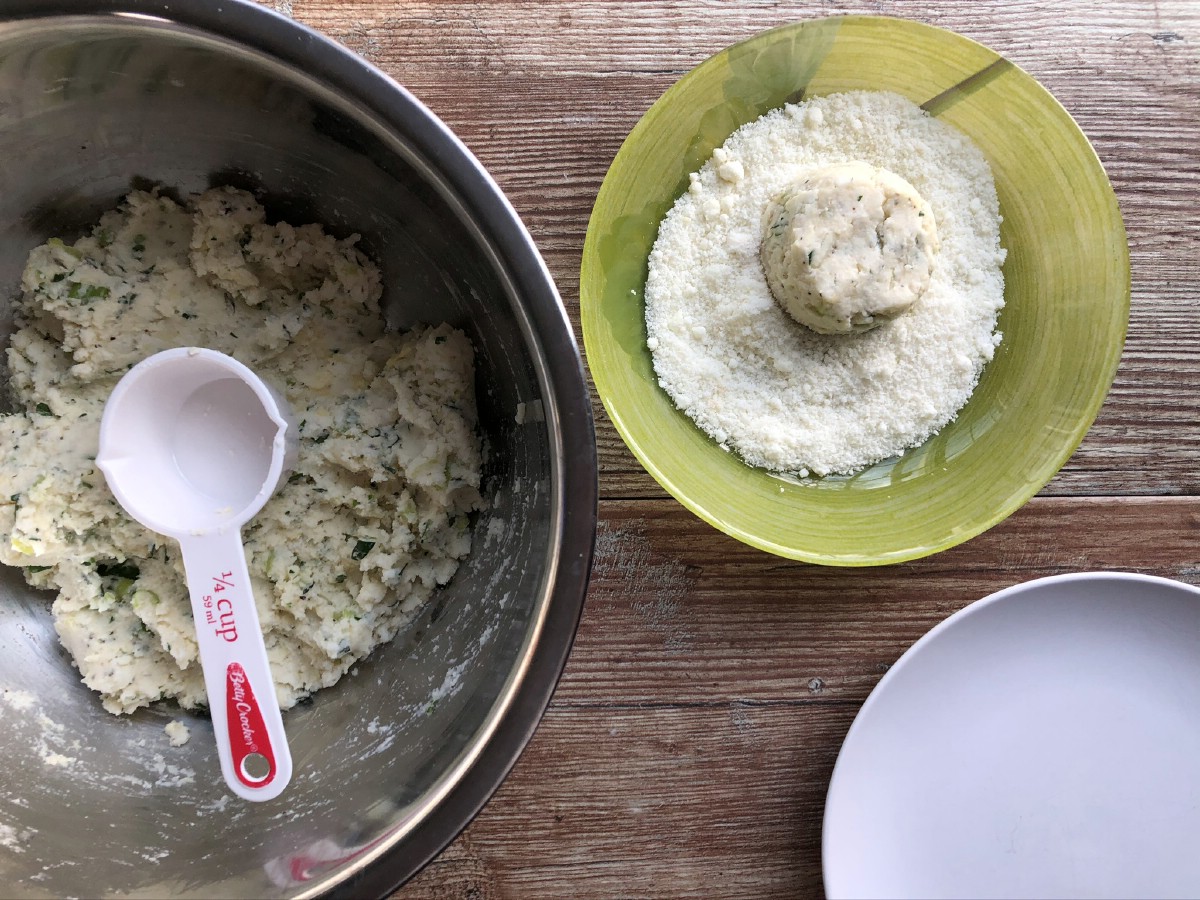 Step 3 – Make the Dill Crema and Cook the Patties

In a small bowl, whisk the sour cream, dill, and lemon juice and season to taste with salt. 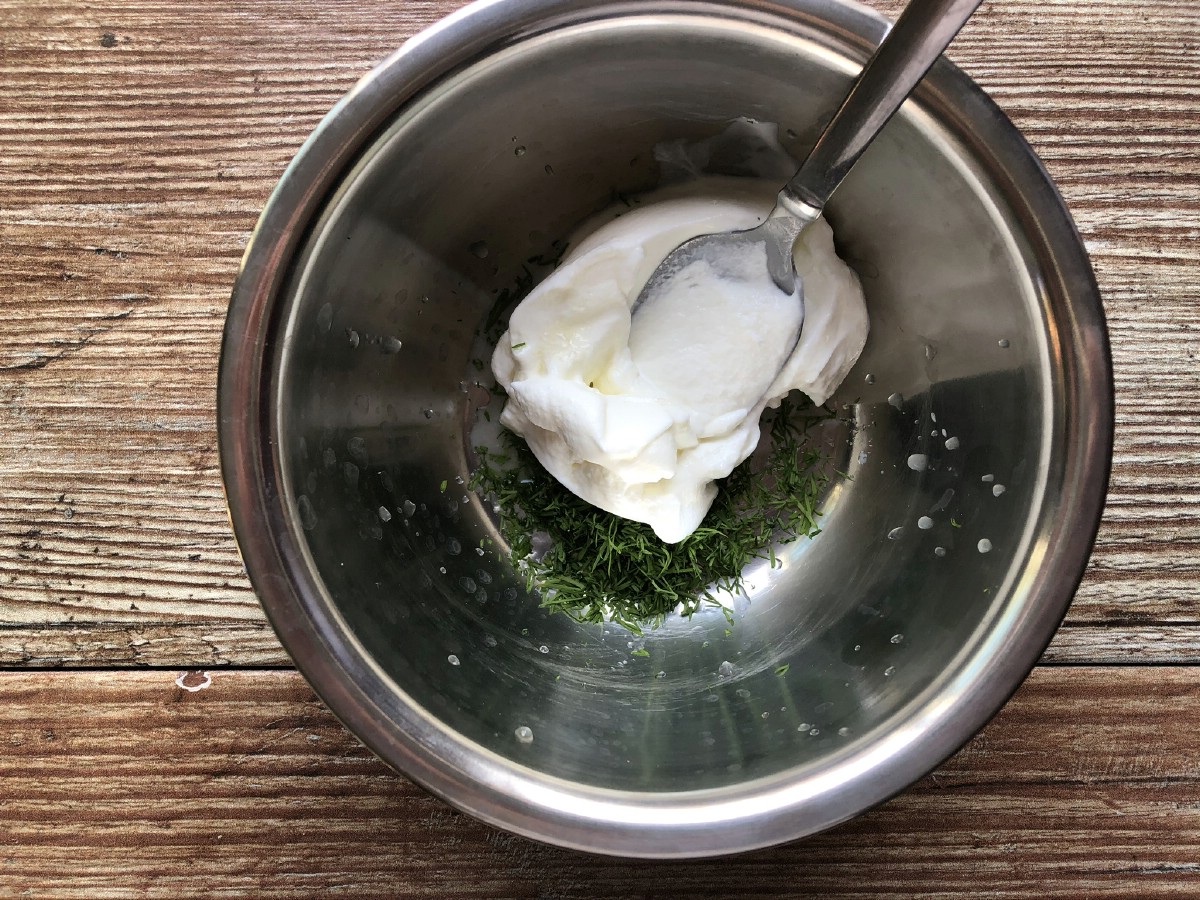 In a large skillet over medium heat, add 3 tablespoons of the oil.

Working in batches and adding more oil as you need it, cook the potato cakes until golden brown, about 2 minutes per side. 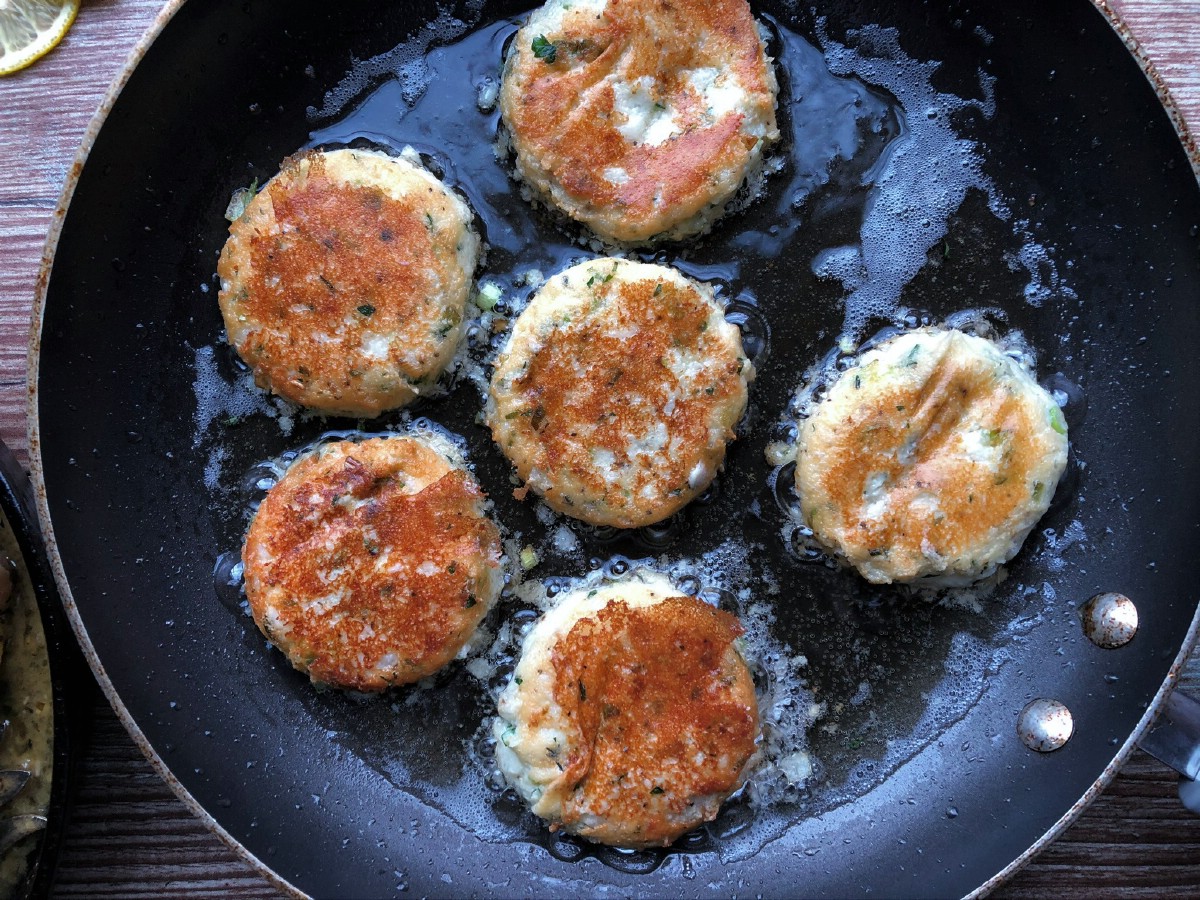 The parmesan crust on the cake is very delicate, so use a sturdy spatula (and the courage of your convictions!) when flipping each one.

Garnish the cakes with the dill crema and serve warm. 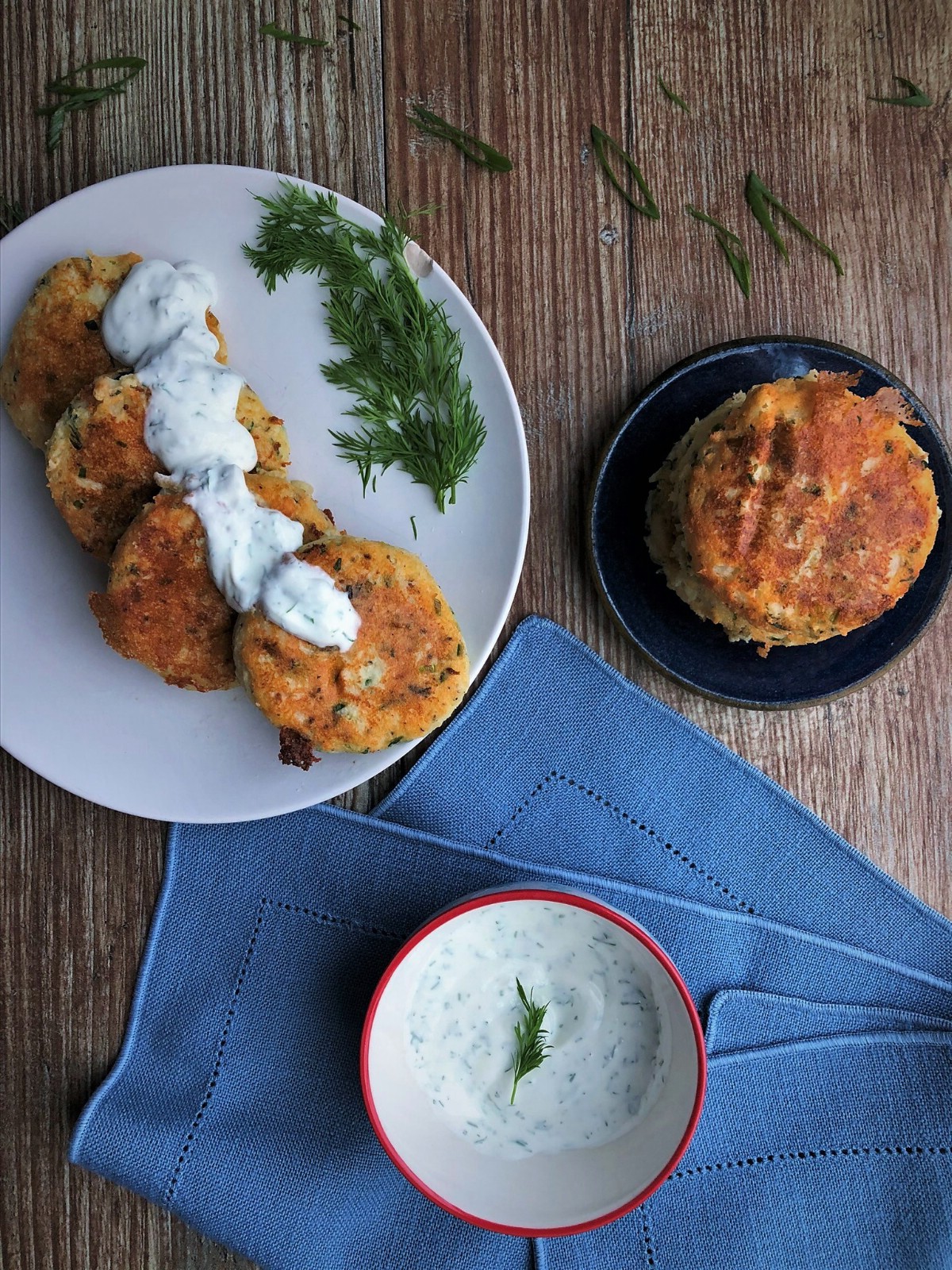 Who needs a magic school bus when you’ve got leftover mashed potatoes?

If you’re unfamiliar with the aforementioned nostalgic cartoon series of my youth, forget what I said and make these potato cakes anyway. They’re stellar as a side dish, but I dig them most as a base for poached eggs.

Playing with your potatoes is totally acceptable in my kitchen. Here are more recipes where spuds stand front-and-center: