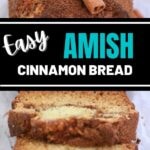 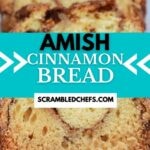 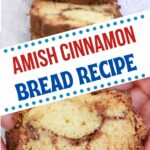 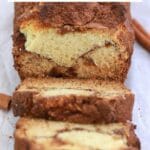 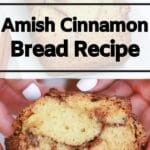 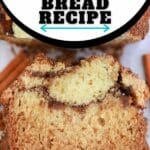 There is nothing as nice as a fresh loaf of Amish cinnamon bread straight from the oven on a cold morning. I love making sweet bread, well, any bread really, but especially sweetbreads. They are just so good! The smell of cinnamon sugar warm in the oven and the first bite of a soft bread slathered with fresh butter is something that can't be duplicated with any other recipe. This is a fast option that mixes up in minutes and uses items you already have in your pantry. 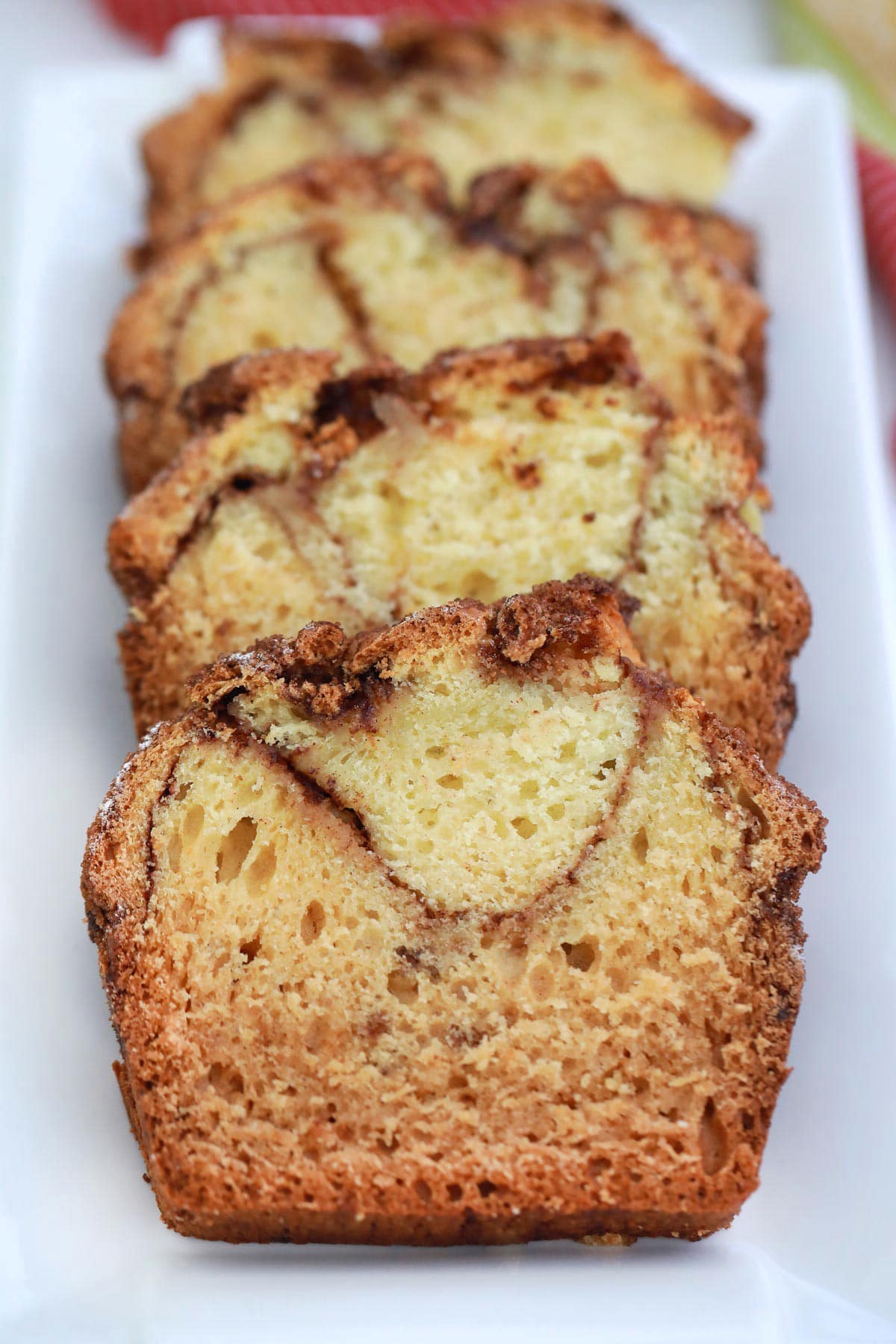 This recipe is like the upgrade to that classic cinnamon toast that moms everywhere make for breakfast. Instead of classic white bread, you have a sweet bread that is rich from the eggs and has little flecks of cinnamon and brown sugar throughout so that every bite is a perfect combination of flavors. While this, like most bread, takes around 45 minutes to bake, the batter itself mixes up in just 2-3 minutes and is in the oven in no time. This makes it ideal for busy days when you need something homemade but doesn't have time to spend creating something elaborate. 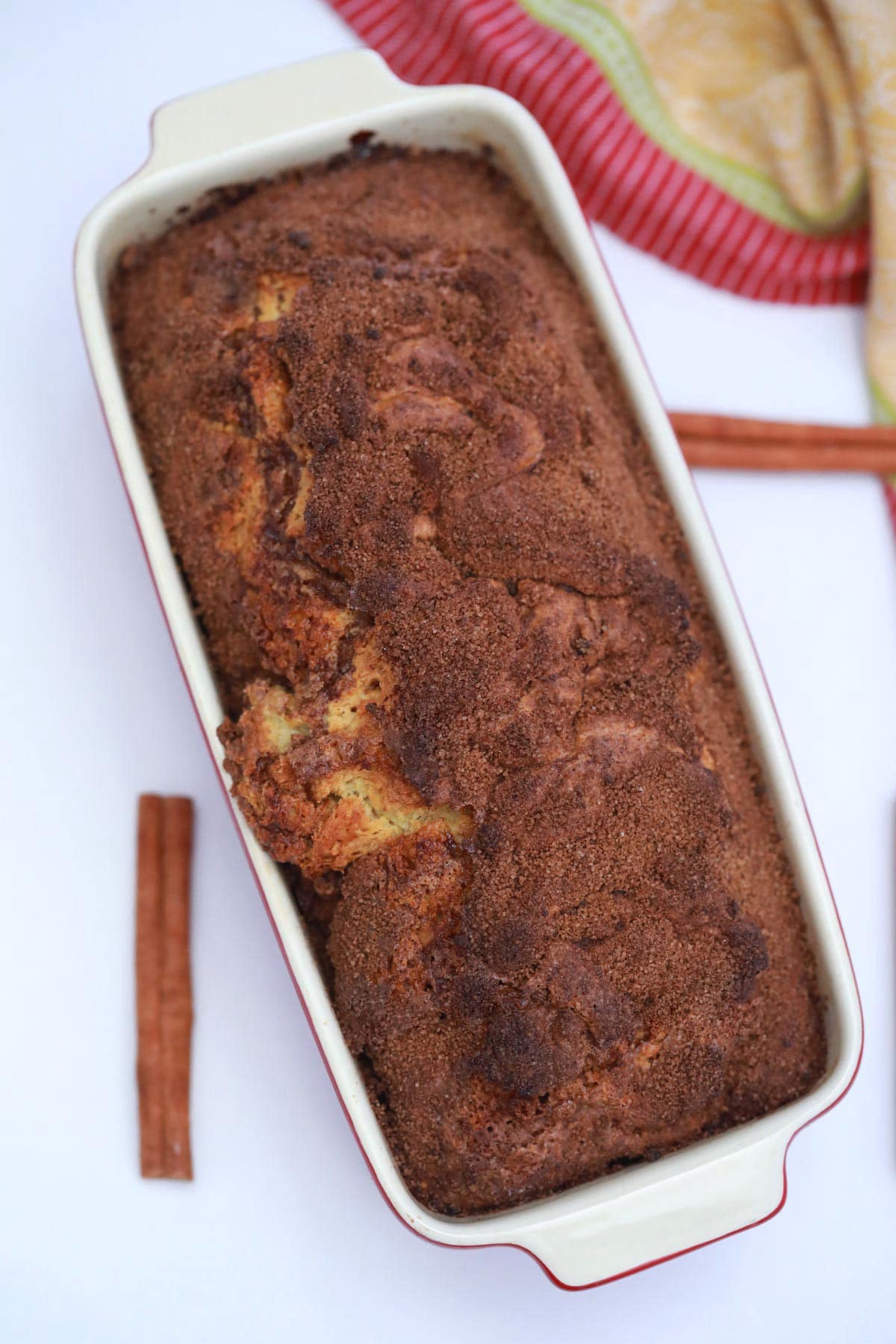 Why is This Called Amish Bread? 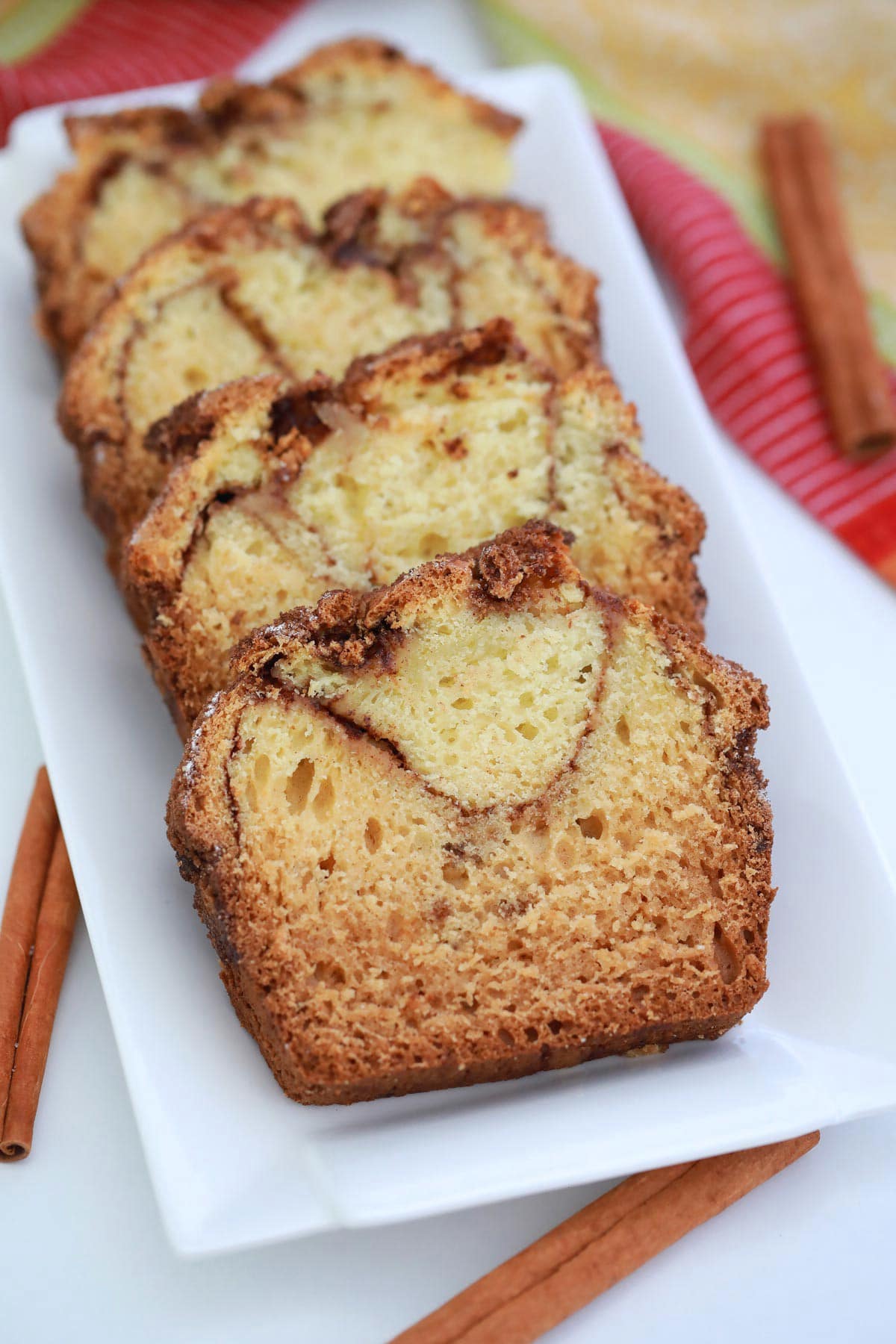 When stored in an air tight container, this is good on the counter for 3-4 days. If stored in the refrigerator, it's good for 7-8 days. You can even wrap well and freeze for up t 4 months to use later.

If freezing this for later, I highly recommend slicing then wrapping the whole loaf together. This makes thawing and serving much easier down the road. I like this since I can toast the bread in minutes and add butter before serving to create a warm cinnamon sugar bite of goodness. It also makes it super easy to prep large batches of bread ahead of time to just reheat on busy days. 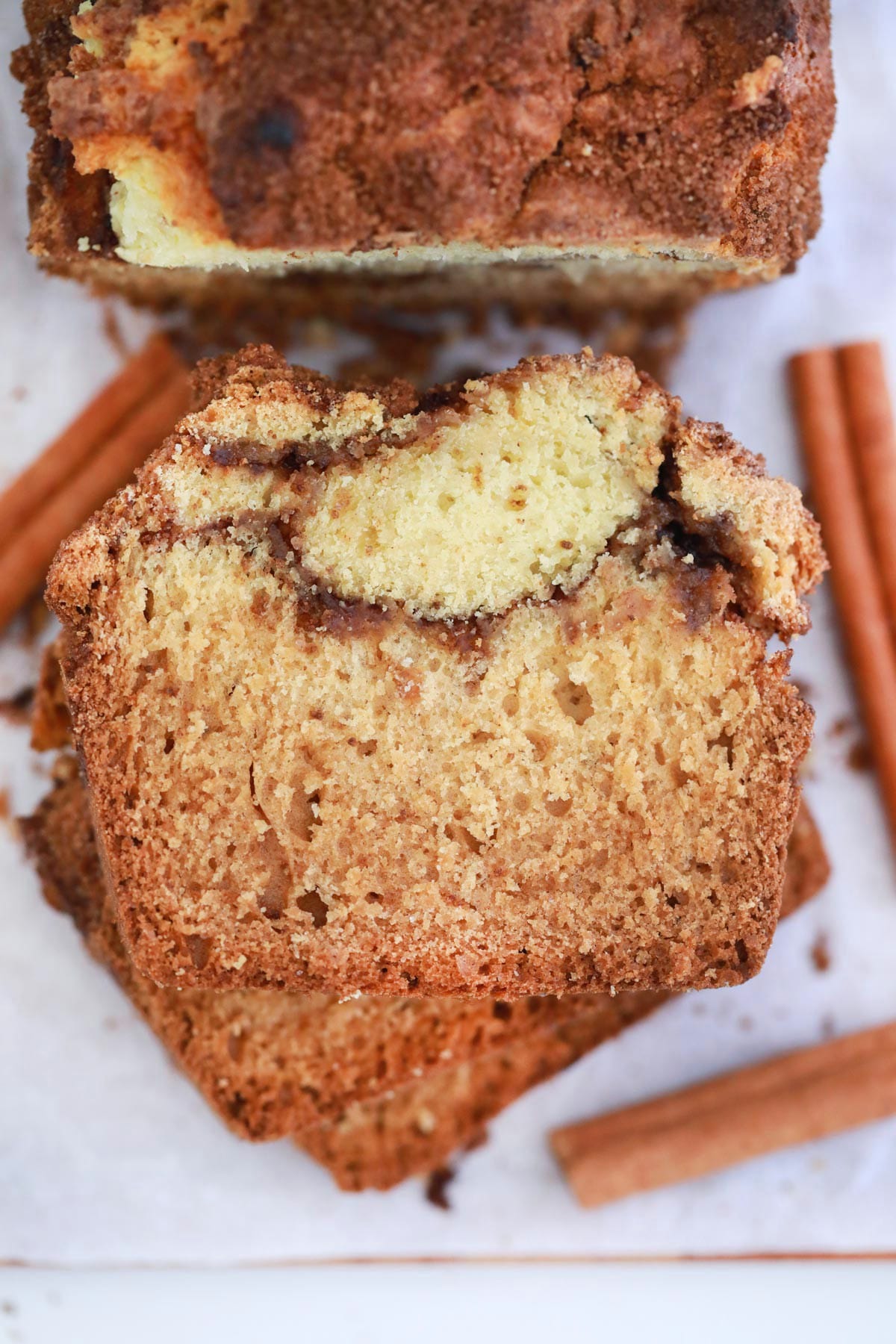 This recipe itself is a great base for adding in other small items for texture and flavor. Cinnamon sugar is super versatile, and with minor tweaks, you can totally change how this bread tastes. Below are a few ideas that I like added into this recipe.

I've made a cinnamon swirl bread recipe before but I have to say, this version is just way better. Of course, you can also make this homemade apple bread recipe that has a little bit different flavor but is very similar - if you want a fruit option. 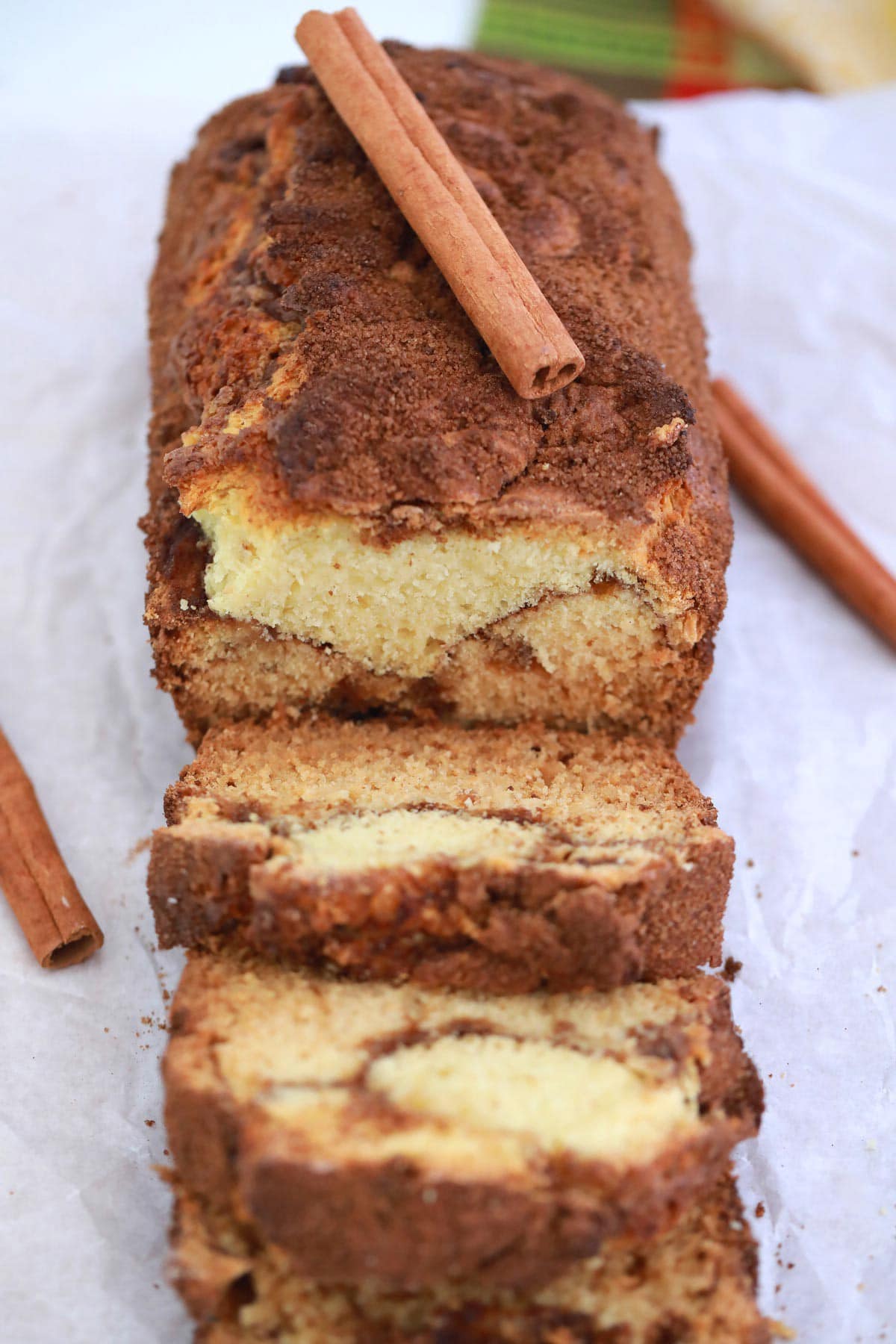 Can I Make This Into Muffins Instead?

You can definitely make this recipe into muffins! All you have to do is divide the batter in the muffin cups and do the same process of batter, cinnamon sugar, batter, and then cinnamon sugar. Swirl with a toothpick and bake for 20-25 minutes or until golden brown and cooked through.

This recipe makes about 12 full-sized muffins, but could also be made into mini loaves or even mini muffins if desired. Just follow the same principle steps and then watch closely when cooking to make sure they don't burn. When done cooking, allow them to cool before removing from the muffin tins. 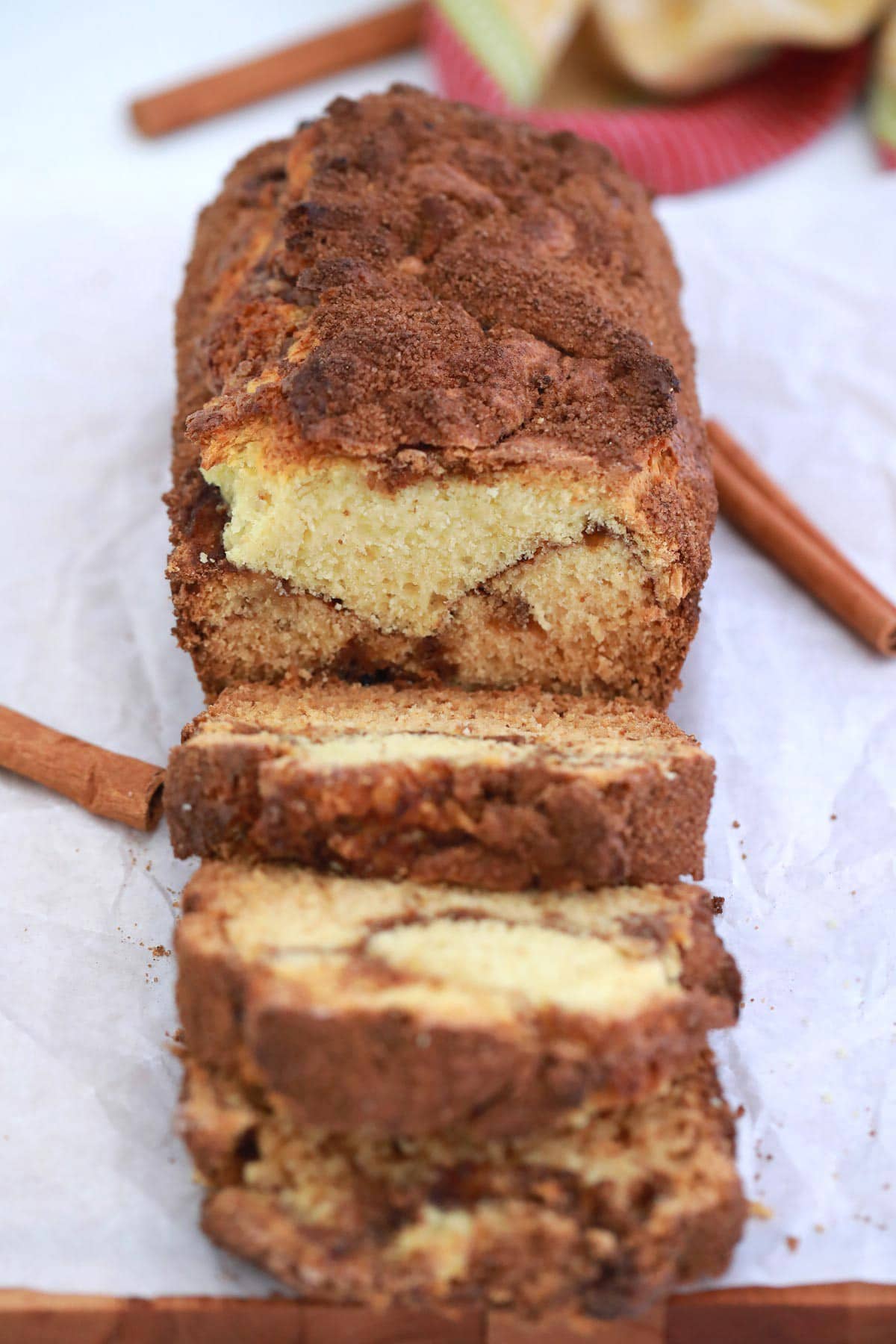 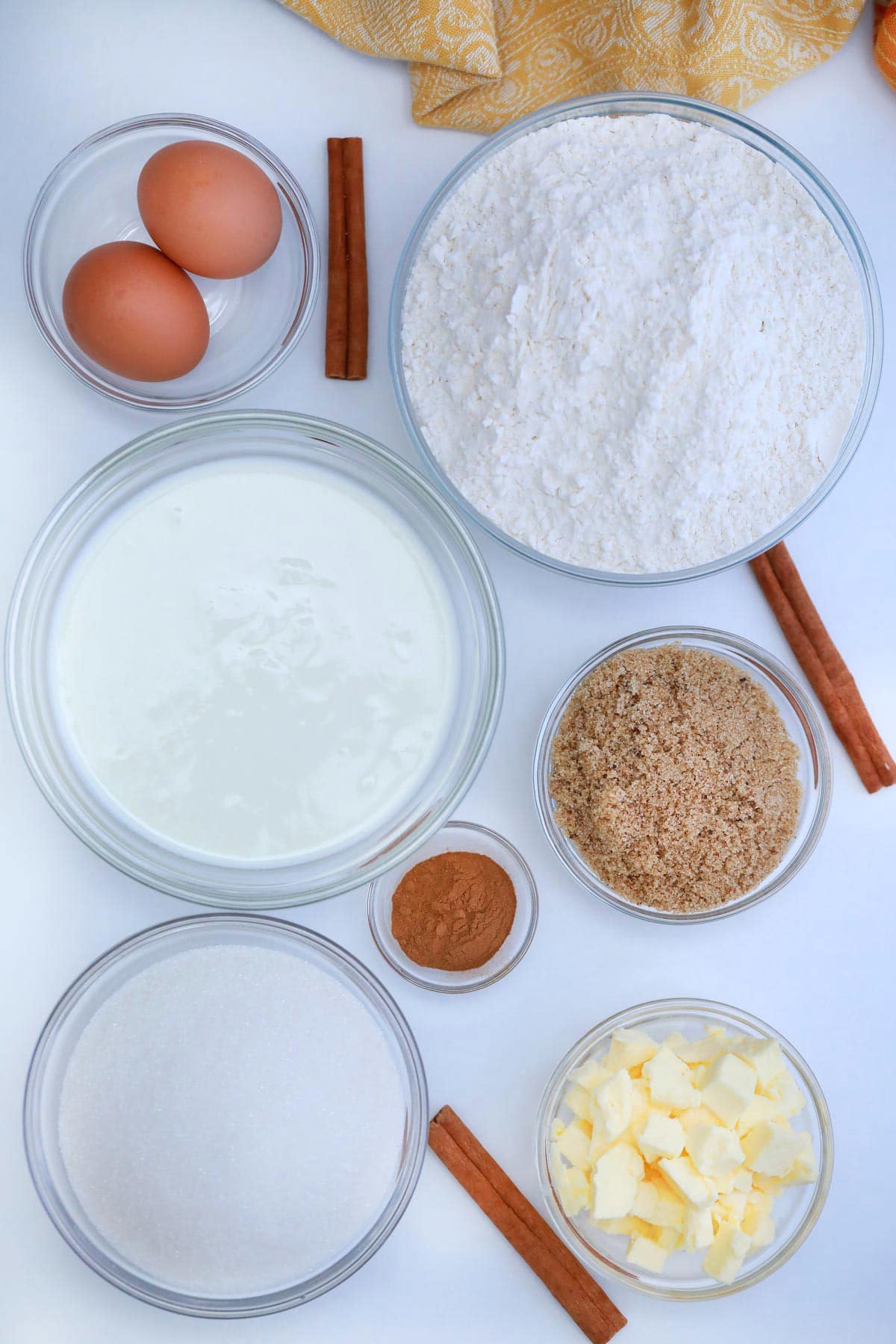 How do You Make Amish Cinnamon Bread

Preheat the oven to 350°F and spray a loaf pan with nonstick baking spray then set aside.

In a large bowl, cream together butter, sugar, and eggs until smooth and pale. 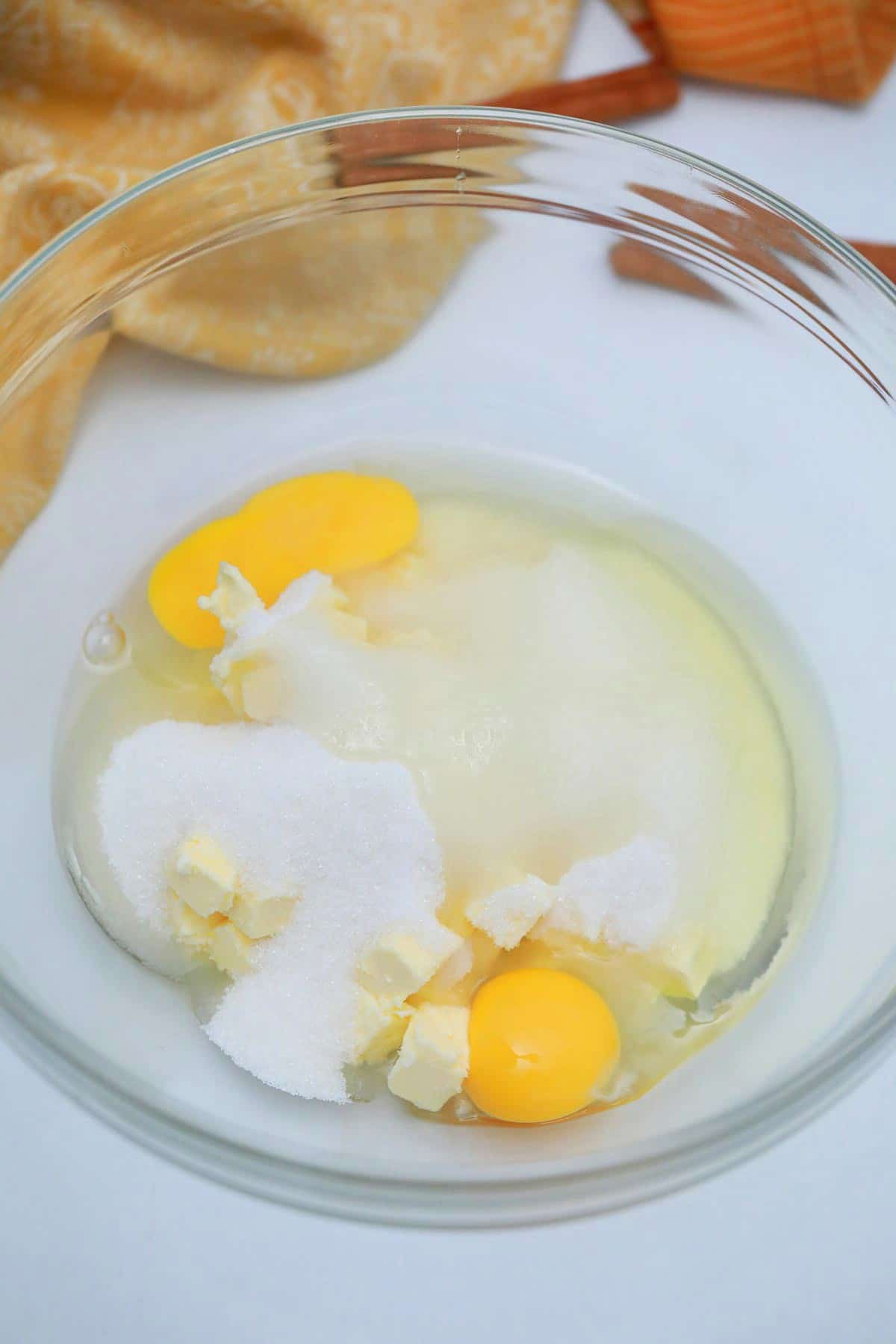 To this mixture, add in the milk, flour, and baking soda and stir until just combined.

In a separate bowl, mix together the brown sugar and cinnamon. 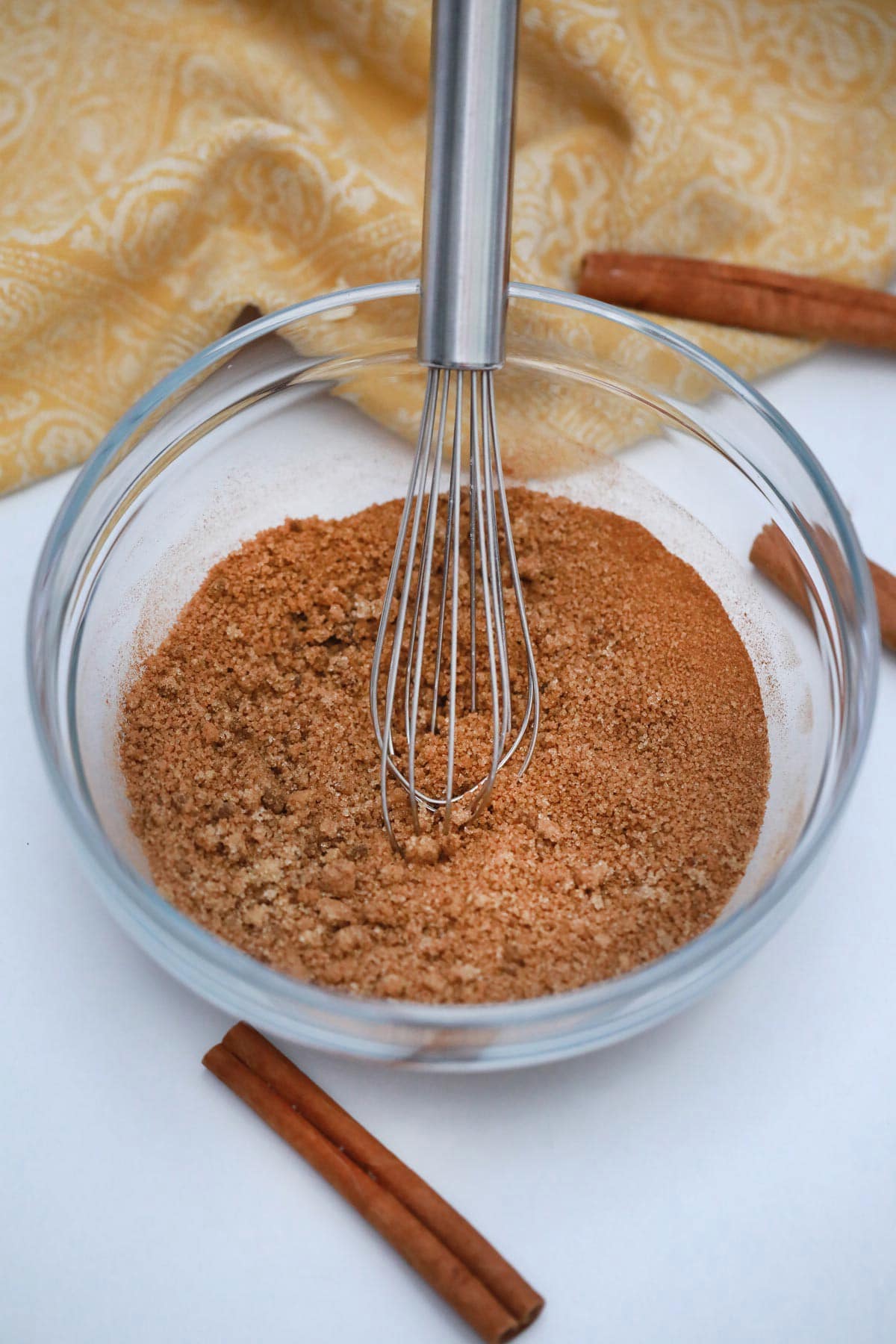 Pour half the batter into the prepared loaf pan.

Sprinkle ¾ of the cinnamon sugar over the batter. 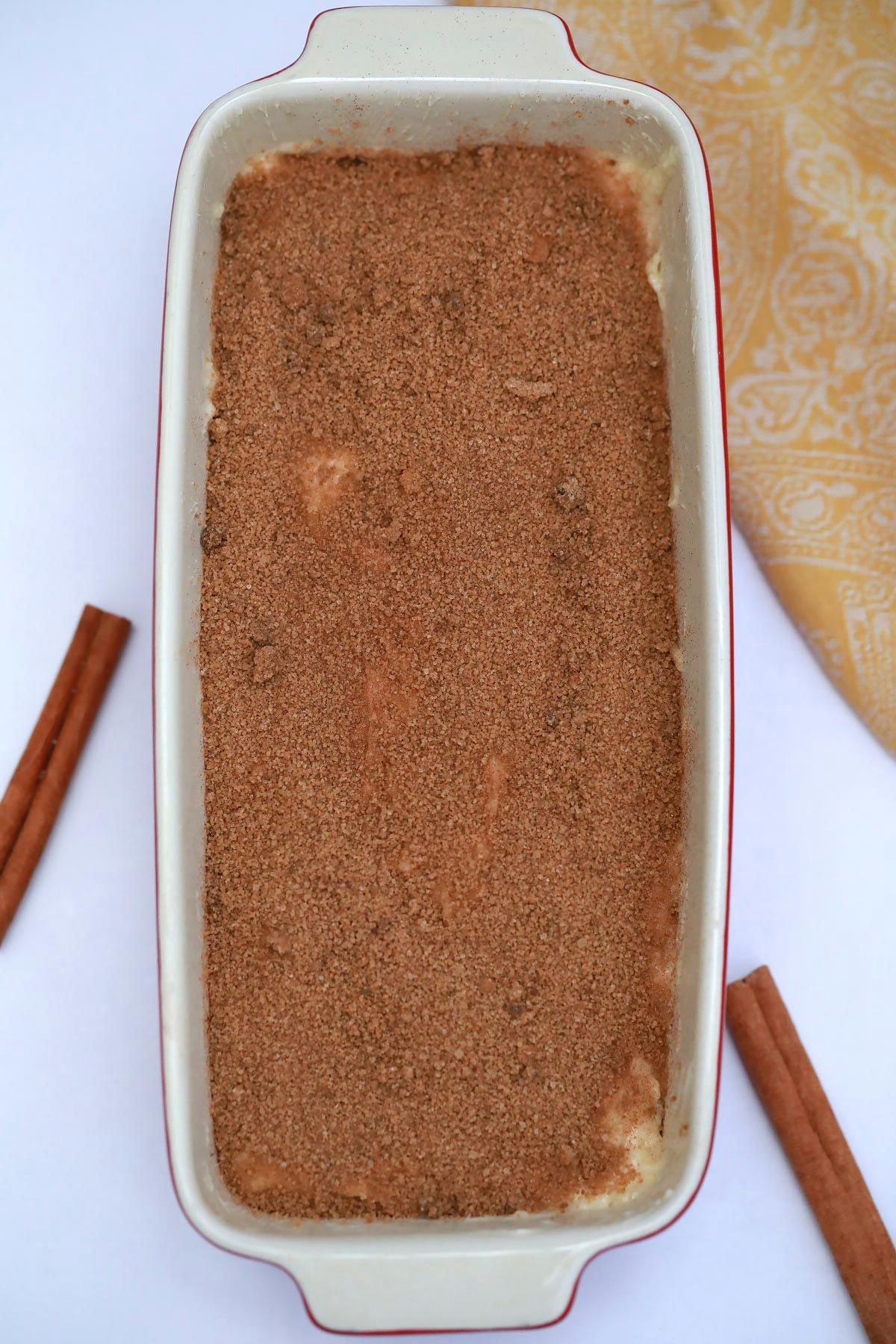 Use a knife or skewer to swirl the batter mixture gently.

Bake for 45-50 minutes until a toothpick inserted in the middle comes out clean. 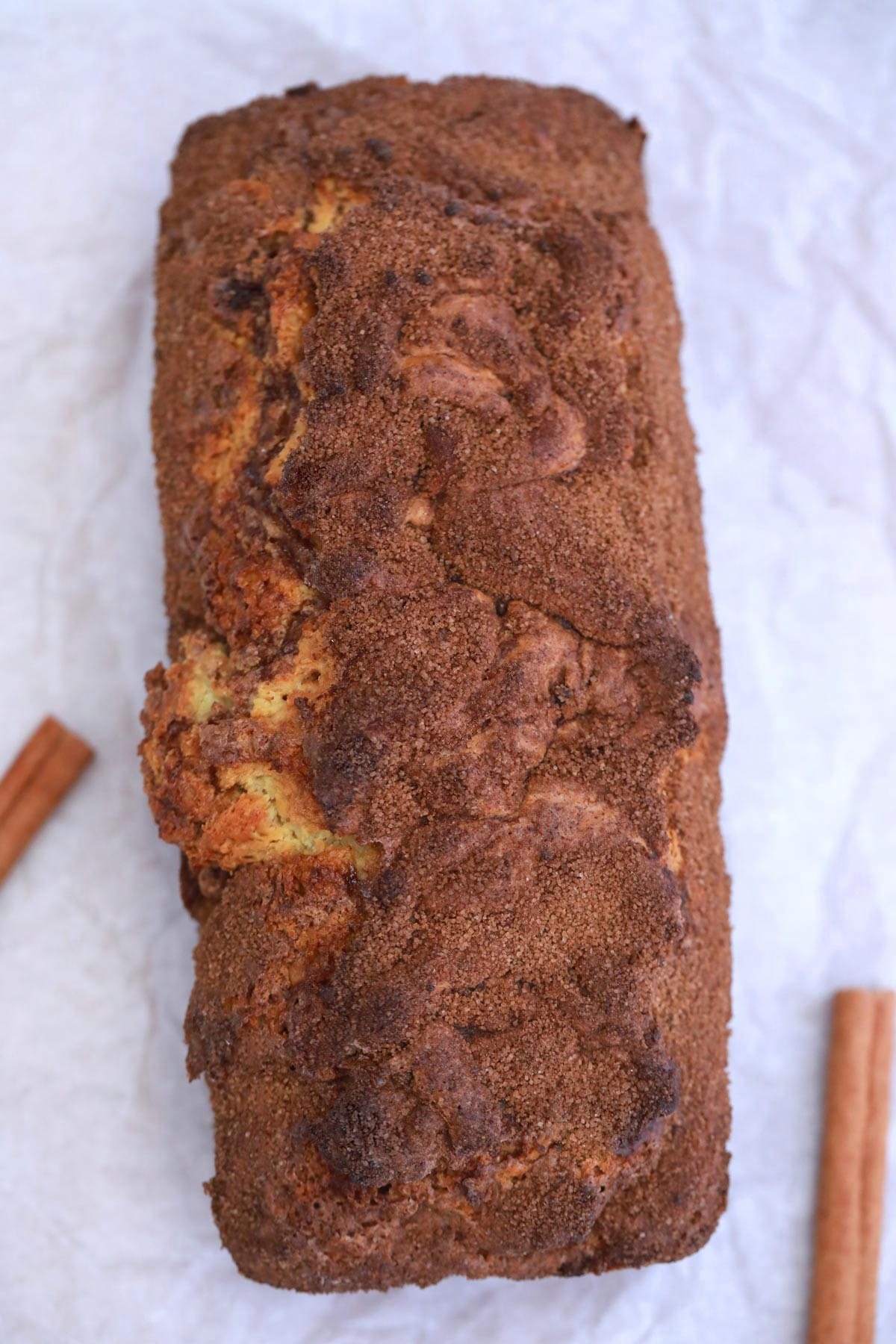 Remove from the loaf pan and cool on a wire rack for at least 20 minutes before slicing to serve. 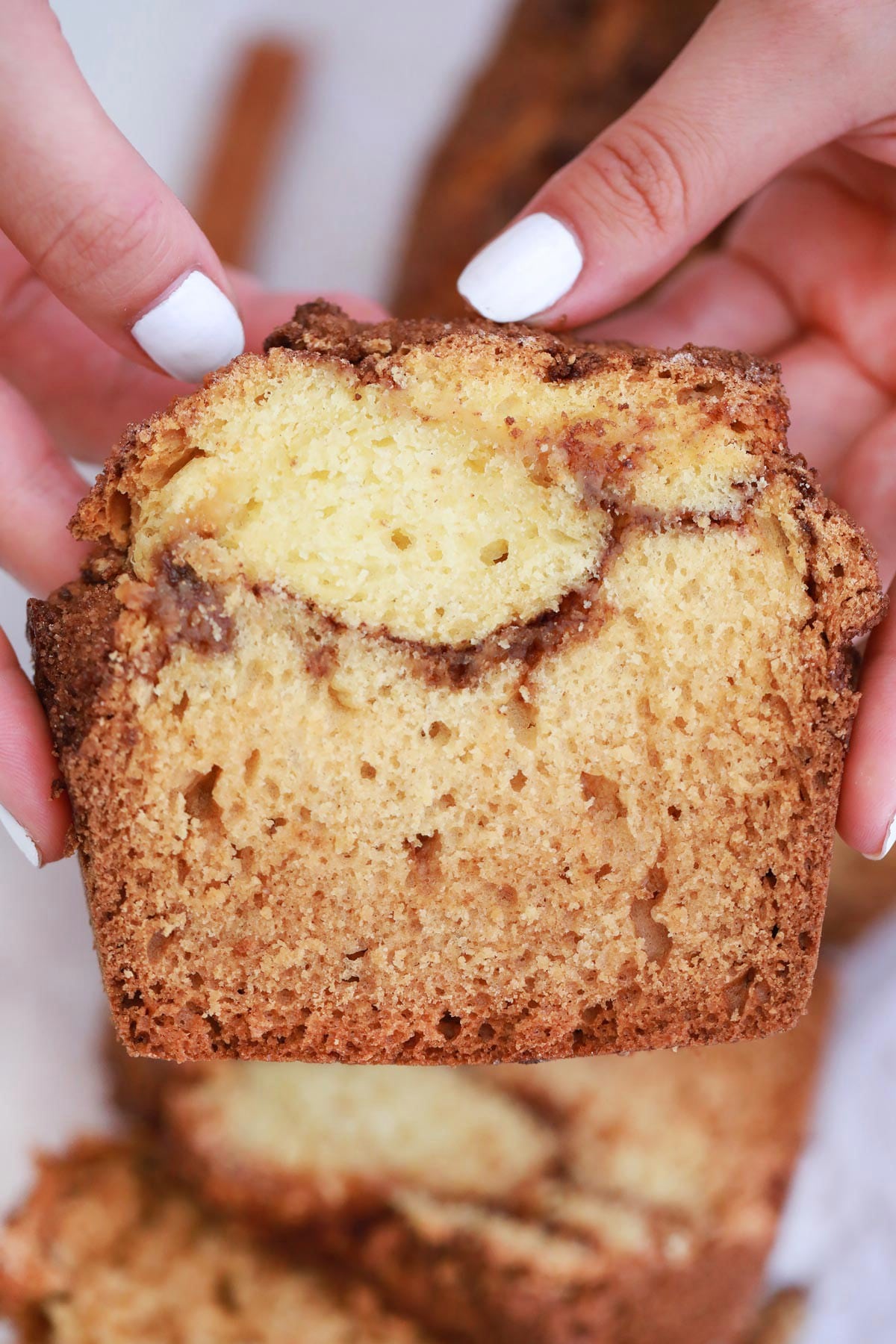 Ever since I was introduced to silicone baking molds and pans, I knew they would be a favorite to use for my favorite sweet breads. It just makes them so much easier to remove and serve. I highly recommend investing in a full set of silicone baking pans including this loaf pan.

Sweet breakfast breads are probably my favorite thing to make. They are always easy, yummy, and perfect for breakfast, snacks, or even dessert. Such an easy option for your menu that everyone loves. Whether you want a single loaf for a special breakfast or to make and gift to friends and family, below you'll find some of my favorites.

Add chopped apples or chopped pecans to the batter for a slightly different spin on this recipe. 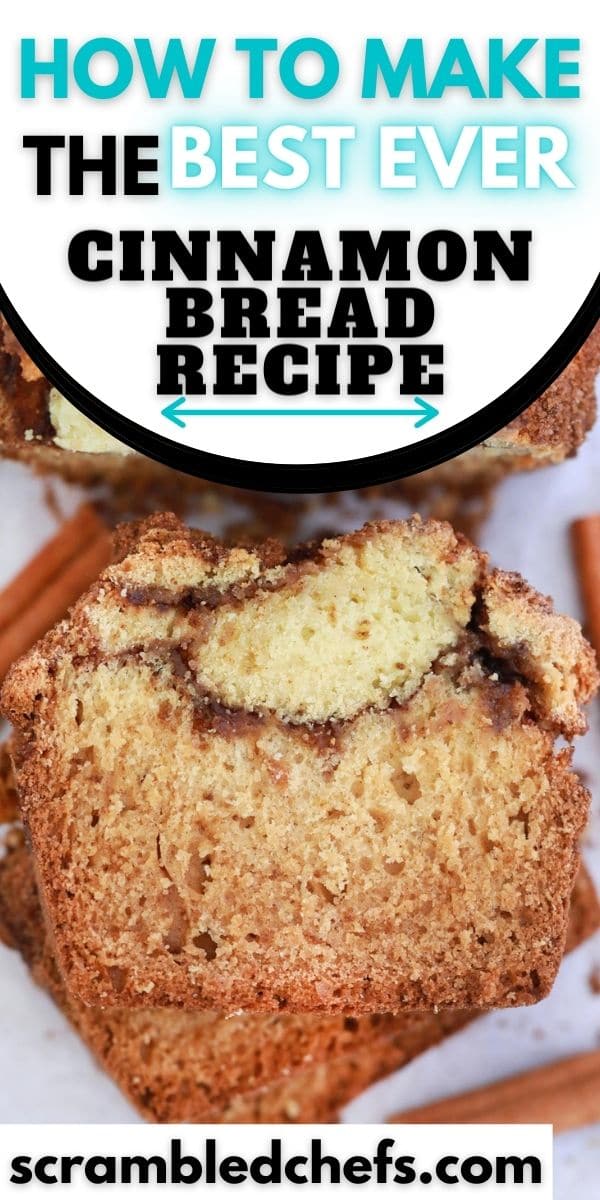