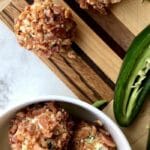 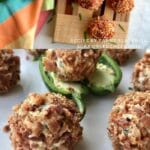 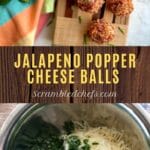 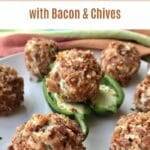 I’ve recently uncovered that I have a love affair with jalapeno poppers. 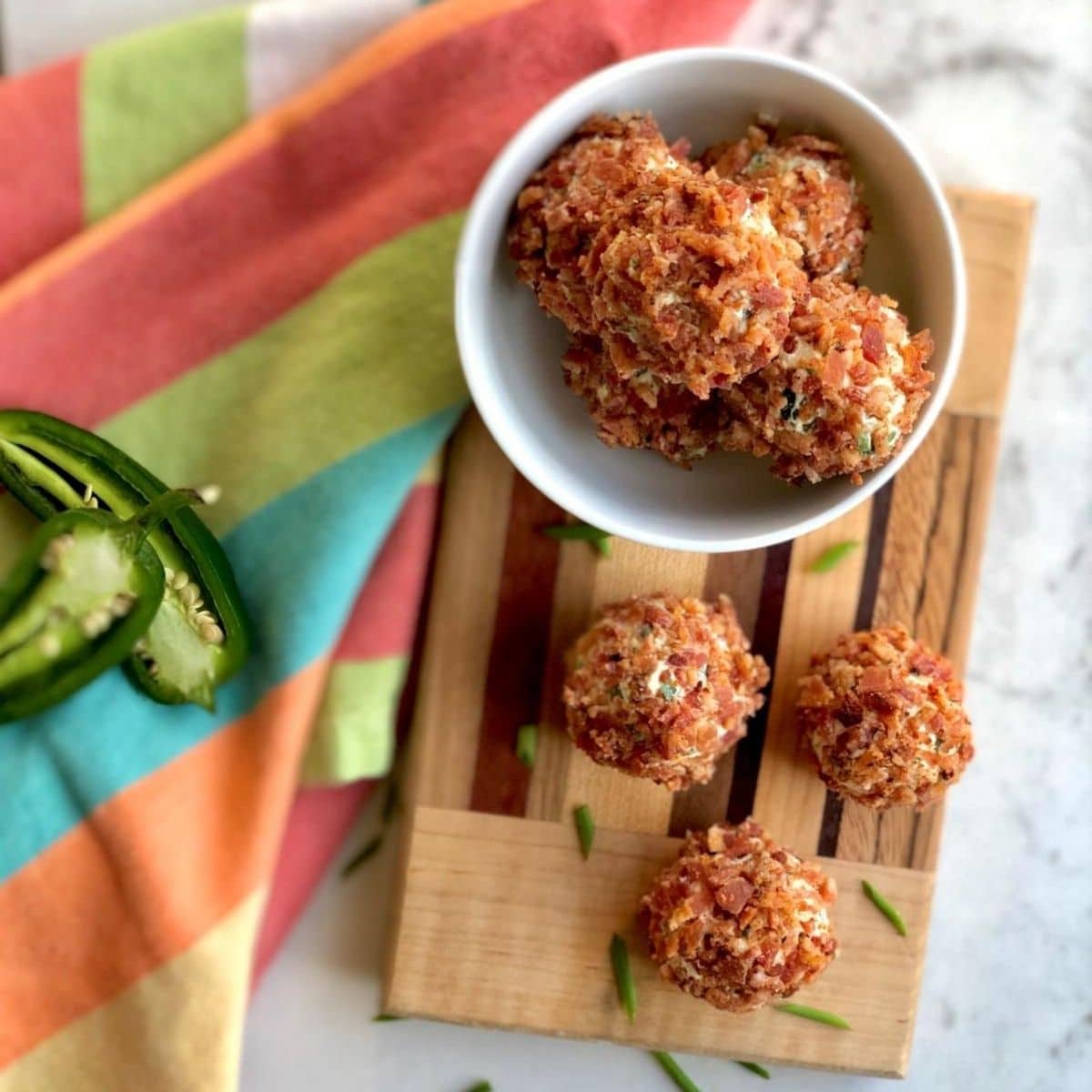 I blame my move to the Midwest, and also the fact that anything fried and stuffed with cheese is undeniably delicious. In the past, I didn’t necessarily turn down jalapeno poppers (I’m not a savage), but I never went out of my way to find them.

When it comes to appetizers, I’m a sucker for cornmeal-dusted pickles, marinara-smothered mozzarella sticks, and my most prolific weakness of all—chips and queso. Ironically, the appearance of a basket of jalapeno poppers isn’t even all that different from a pile of golden-brown cheese sticks which I’ll happily inhale.

I believe my standoffishness for this starter began with a fear of the spice. In my naivety, I assumed they were still laden with those fiery seeds. Oh, the things we learn as we grow.

I was also concerned that the breading would slip right off and I would be left with nothing but a naked jalapeno. Not to say that I haven’t undressed many-a-fried pickle in the same accidental manner, but vinegary cucumbers and wildly hot peppers are not in the same category.

When my husband and I moved from North Carolina to Illinois last year, I was suddenly surrounded by (snow) and an entirely new language.

A soda of any variety suddenly became “pop.” Beer turned into “lite” and there wasn’t a single menu that didn’t contain the ever-popular “poppers.”

For some reason I trusted these unfamiliar Midwesterners, their verbiage, and their love for bar food. I started indulging in jalapeno poppers left and right, and realized that I had been missing out an entire world of flavor.

Some coatings were thick and hearty, while others crisp and light. Sometimes the peppers still sported their stems, and occasionally they were split right in two. I even discovered that they came in two different flavors of cheese. My kind of shopping.

The latter results in a salty, stringy bite that pairs perfectly with garlicky ranch—while the cream cheese version is velvety, mild, and lovely when it lands in hot pepper jelly.

Although I can’t deny that I’m now a fan of both options, I’ve found myself more drawn towards the fluffy cream cheese-stuffed rendition. I adore how the soft tang of the cream cheese gets a jolt from the grassy pepper and a bite from the fried exterior.

I experimented with several homemade versions at home, and all ended in a mess that I had to clean up by the mouthful. Although I didn’t mind that part, the entire process was too labor-intensive for my taste. By the time I had charred and ever-so-delicately scooped out the pepper’s seeds and ribs without breaking the skin—I didn’t have the energy for frying.

And then low and behold, I thought to myself—what if I turned these inside out?

The best part is the filling anyway, so why not make an easily inhalable appetizer that incorporate all of the best components in one single bite? Well, I can’t answer the question of why not. 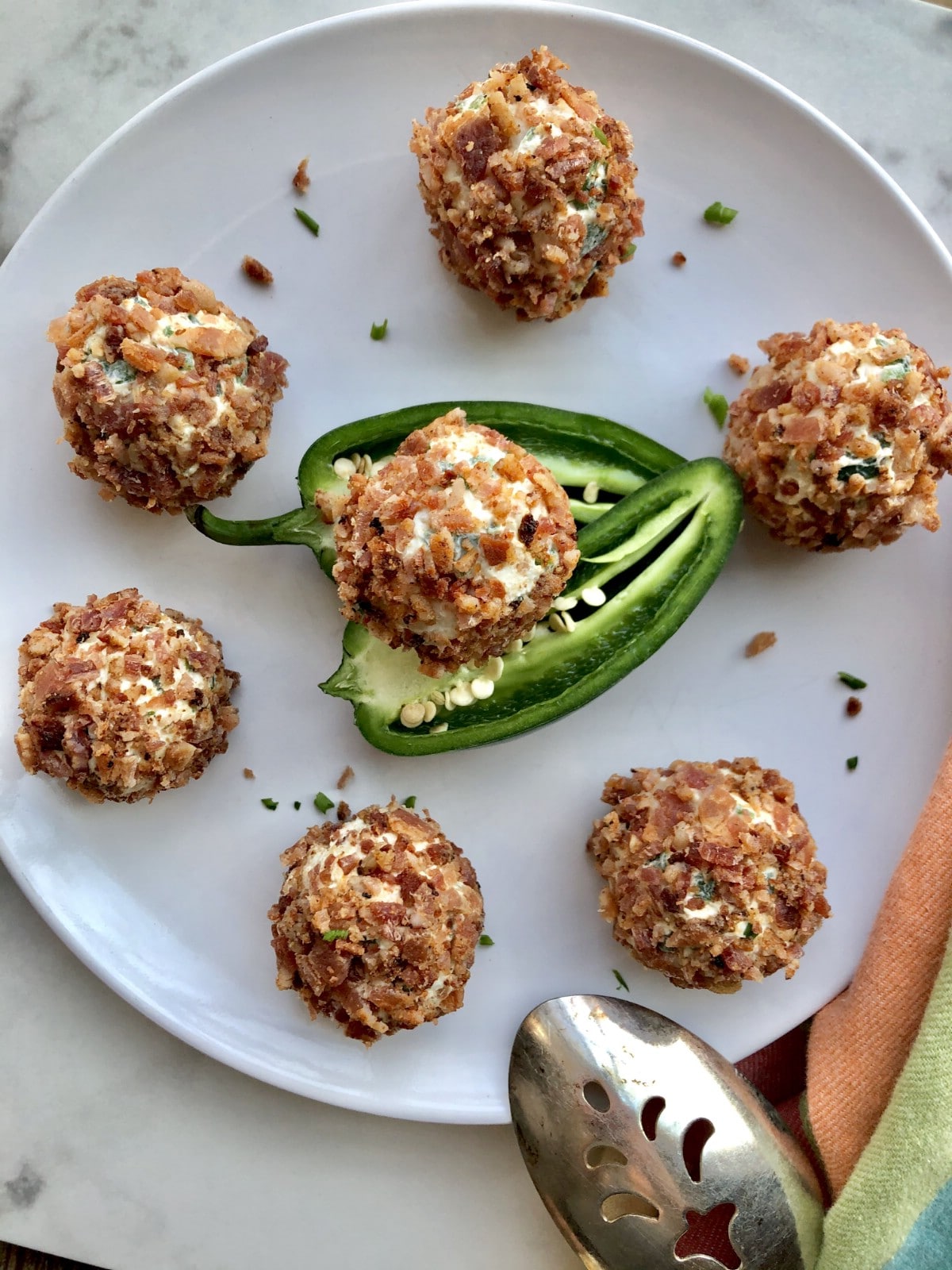 When it comes to warm jalapeno poppers, that melt-in-your-mouth cream cheese makes me melt a little inside. But for something that’s meant to be eaten cold, like these chilled nibbles, I wanted to produce a contrast of cheesy flavors.

Sharp cheddar was suddenly back in the game. I love when everything comes full circle (pun totally intended).

When snowballed along with cream cheese, oniony chives, and minced jalapenos—the result was like nothing I had ever tasted. Okay, that not true. It was exactly like what I had tasted before.

Which was totally the goal.

A few subtle hints of dried spice and a helping hand from my subtly sweet friend the shallot gave these cheese balls all of the character and attitude of the classic I had been chasing. And just as I realized that only thing missing was a crunchy outer layer, it hit me.

After a swift tumble through smoky bacon bits, my cheese balls had reached their ultimate potential and I decided that maybe the Midwest wasn’t so weird after all.

So, who’s up for some poppers and pop?

Step 1 – Cook the Bacon and Chop the Aromatics

In a large skillet over medium-low heat, cook the bacon until crispy, about 8-10 minutes and then set aside on a paper towel-lined plate to soak up any excess oil. Once cooled, finely chop the bacon and place it in a wide shallow bowl. You can also pulse the bacon in a food processor for even finer crumbs.

Mince the chives, jalapenos, and shallots. 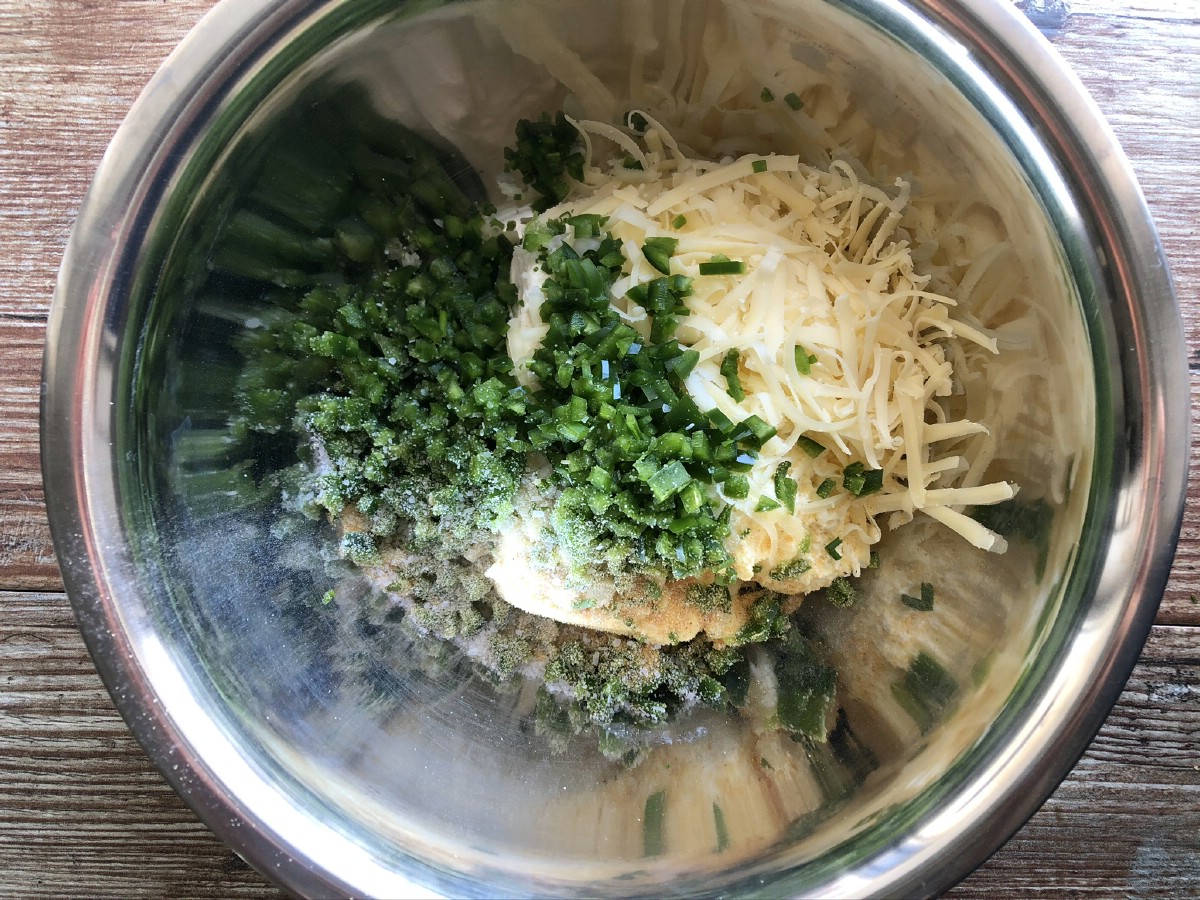 Season to taste with salt and then refrigerate for at least 20 minutes. Hardening the mixture a bit helps with scooping and rolling the balls.

Step 3 – Form the Balls, Coat in Bacon, and Serve

Using a tablespoon or small cookie scoop as your guide, portion out a small amount of the filling and form it into a ball. You can oil or use non-stick cooking spray on your tablespoon to help the mixture from sticking.

Roll the cheese ball through the bacon and repeat until all of the mixture is gone.

Refrigerate until you’re ready to serve.

If you, too, have experienced a fear of the fire when it comes to jalapeno poppers—these cheese balls will put all of your anxiety at ease.

Once the scary insides of the jalapenos are removed, your left with a bright, earthy, crunchy pepper that you’ll realize you never should have been afraid of in the first place. Also, the epic amount of cheese mellows any remnants of spice.

When you’re done popping these party treats, pass the torch to these bite-worthy appetizers: 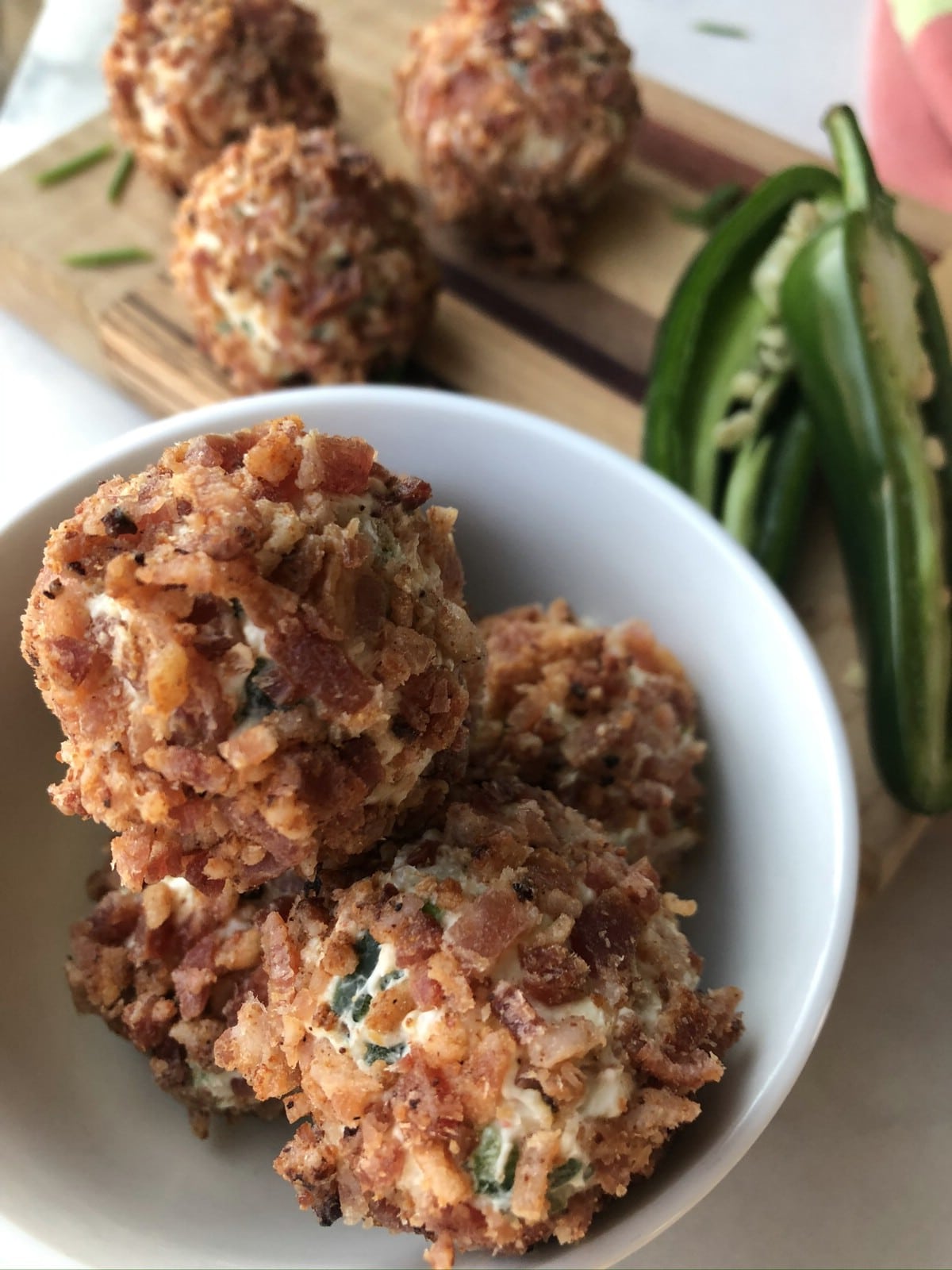 These fresh cheese balls are perfect as-is, but to take them to the next level, dredge them in eggs and breadcrumbs and drop them right into the fryer. Serve with ranch for dipping and beer for drinking.

For a peppery Italian addition, sub in cubed pancetta for the bacon. Just make sure it’s finely chopped once cooked otherwise the coating won’t stick as well.

If it’s a real zing you’re after, swap in a few serranos for the jalapenos. These thinner-skinned peppers have a similar look but a more powerful punch of rich heat.