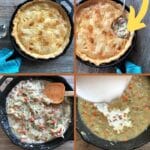 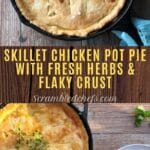 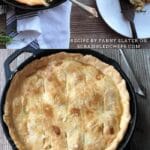 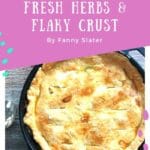 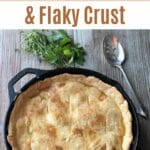 I know I’m not the only one who thinks that napping inside of a chicken pot pie would be the best sleep ever? 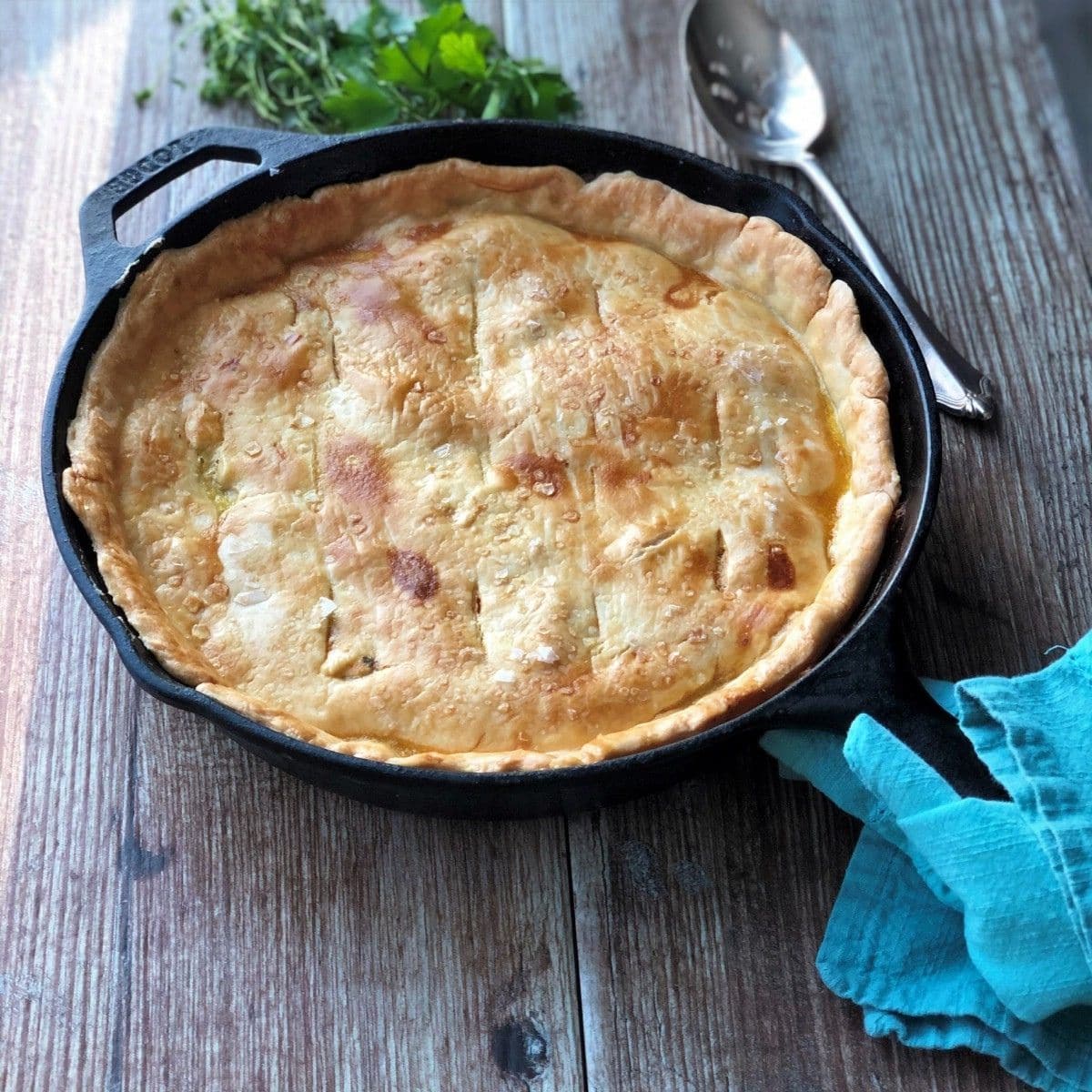 Don’t everyone’s insides melt when they think of a golden-brown pastry crust encasing a silky pool of creamy chicken and veggies?

The thought of it right now makes my mouth water. Sure, it’s dinnertime and I’m starving. But it wouldn’t surprise me to wake up in the middle of the night from a chicken pot pie dream and be surrounded by a puddle of drool.

Though that might also be in result of my snoring problem. 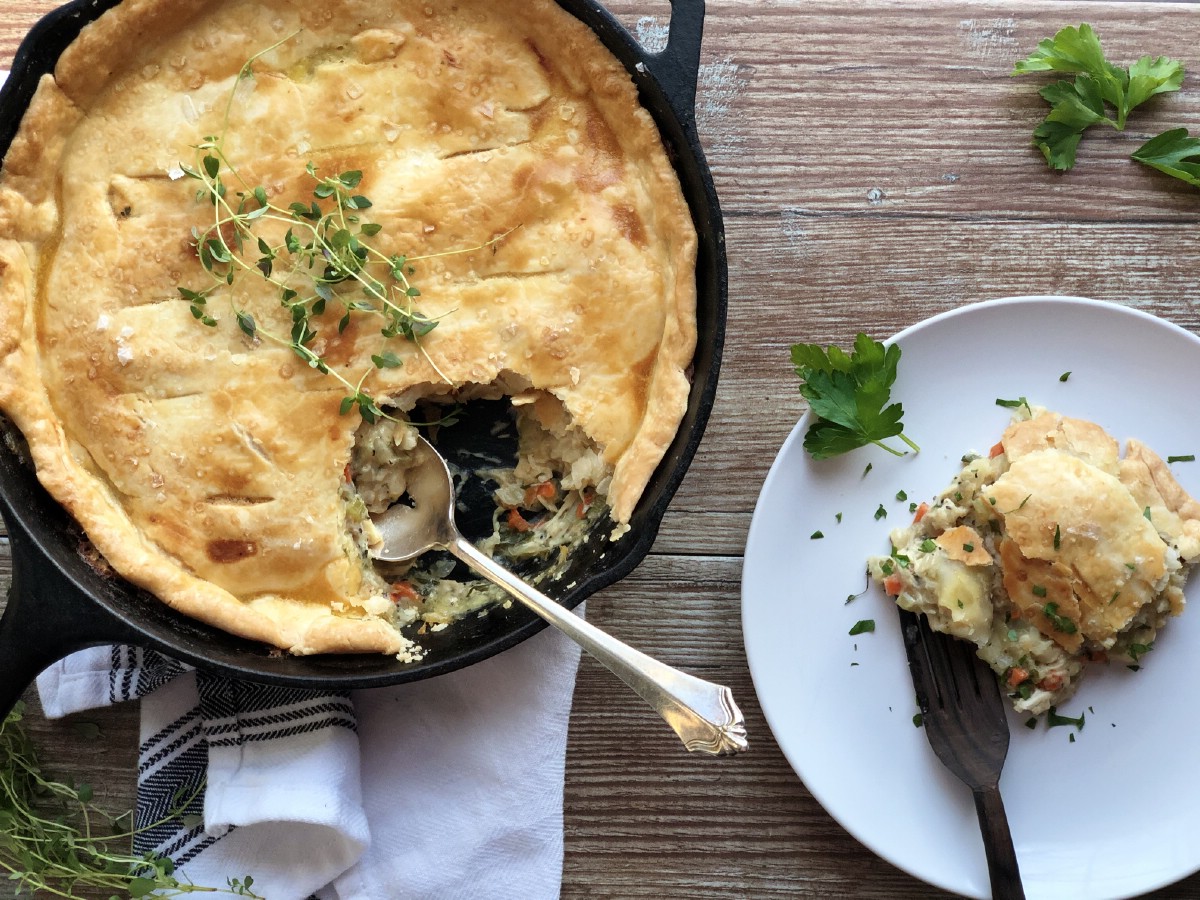 If you ask anyone what they love about chicken pot pie, they’re going to give you one of two answers. It’s either the crispy, buttery exterior or the lush, savory mixture just waiting to play peak-a-boo.

If I had to pick, I would go for the crust.

When it comes to brownies, I’m a corner girl through-and-through. If there’s baked mac and cheese nearby—I’m all over the crunchy bits on top.

And when it comes to pot pie, I can’t imagine scooping up a bite of that glorious filling without also getting a forkful of crumbly crust.

But it’s so much more than that. I’ve said it before and I’ll say it again: for me, food is memories.

It’s not that every single bite I consume brings me right back to childhood. For example, I had seaweed salad and sushi for lunch—and I promise you that slippery, somewhat slimy ocean algae is a texture I didn’t get down with until my twenties.

The flavors that do pull me back to those treasured food memories, however, stick with me for years and infinitely continue to inspire my culinary adventures today.

In my world, chicken pot pie channels after-school memories cozied up in the front seat of my mom’s car. That’s right. The car.

As a matter of fact, I don’t ever remember my dad (the proficient head chef in our family) making chicken pot pie in our kitchen. His love for cooking stirred mine and together we have created more edible memories than I can remember.

From fluffy scrambled eggs with sharp white cheddar and sage to lemony, charcoal-scented summertime chicken on the back deck. 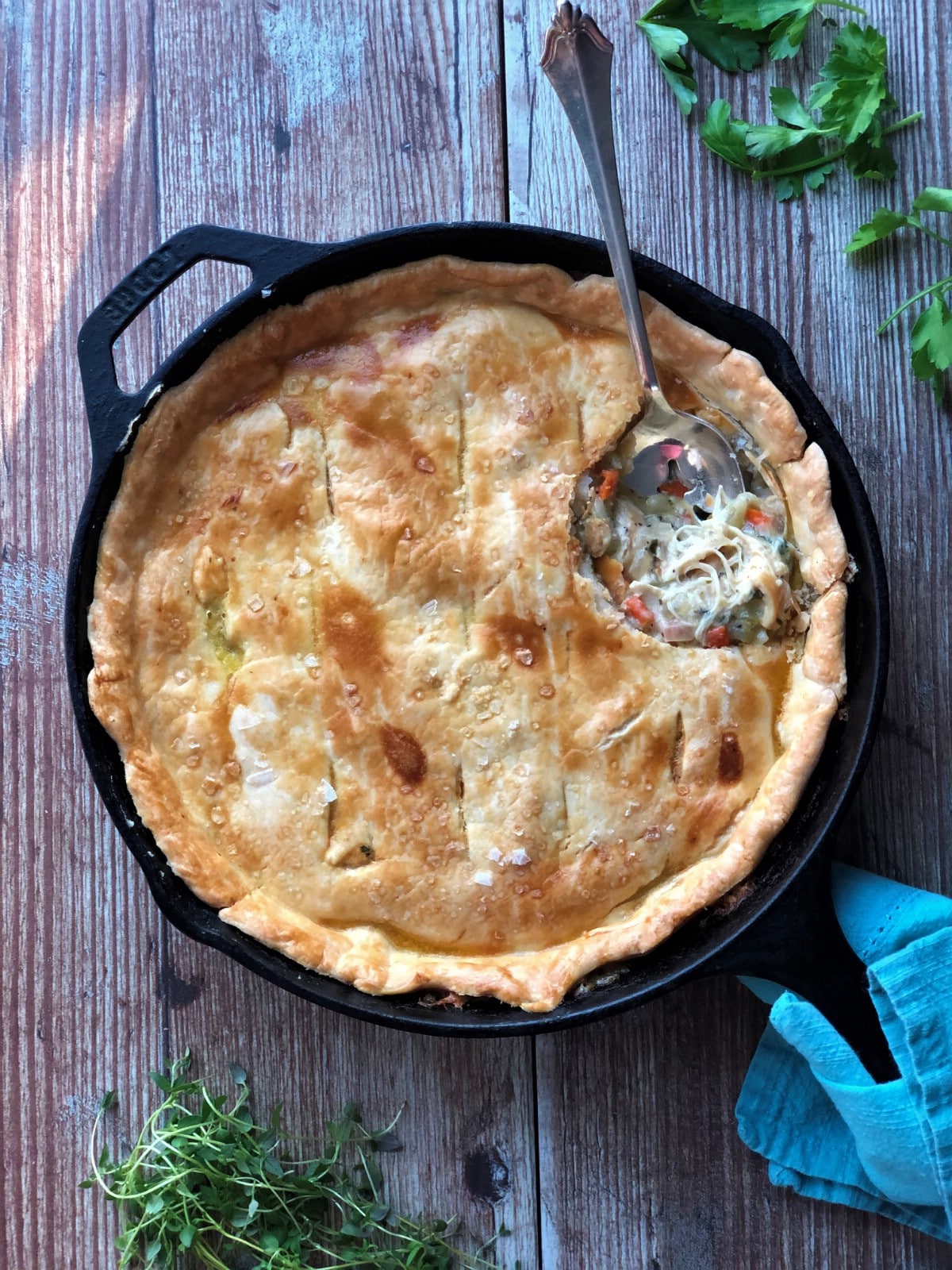 So where did my longtime infatuation for this flaky-crusted chicken pastry come from and why was I eating it in a car?

Well, because it was handed to me through a fast-food window.

Yep, I said it. No judgment.

Despite growing up in a food-obsessed family where nearly everything was homemade and prepared with love, dozens of my fondest food recollections came from random experiences at fast-casual restaurant chains. 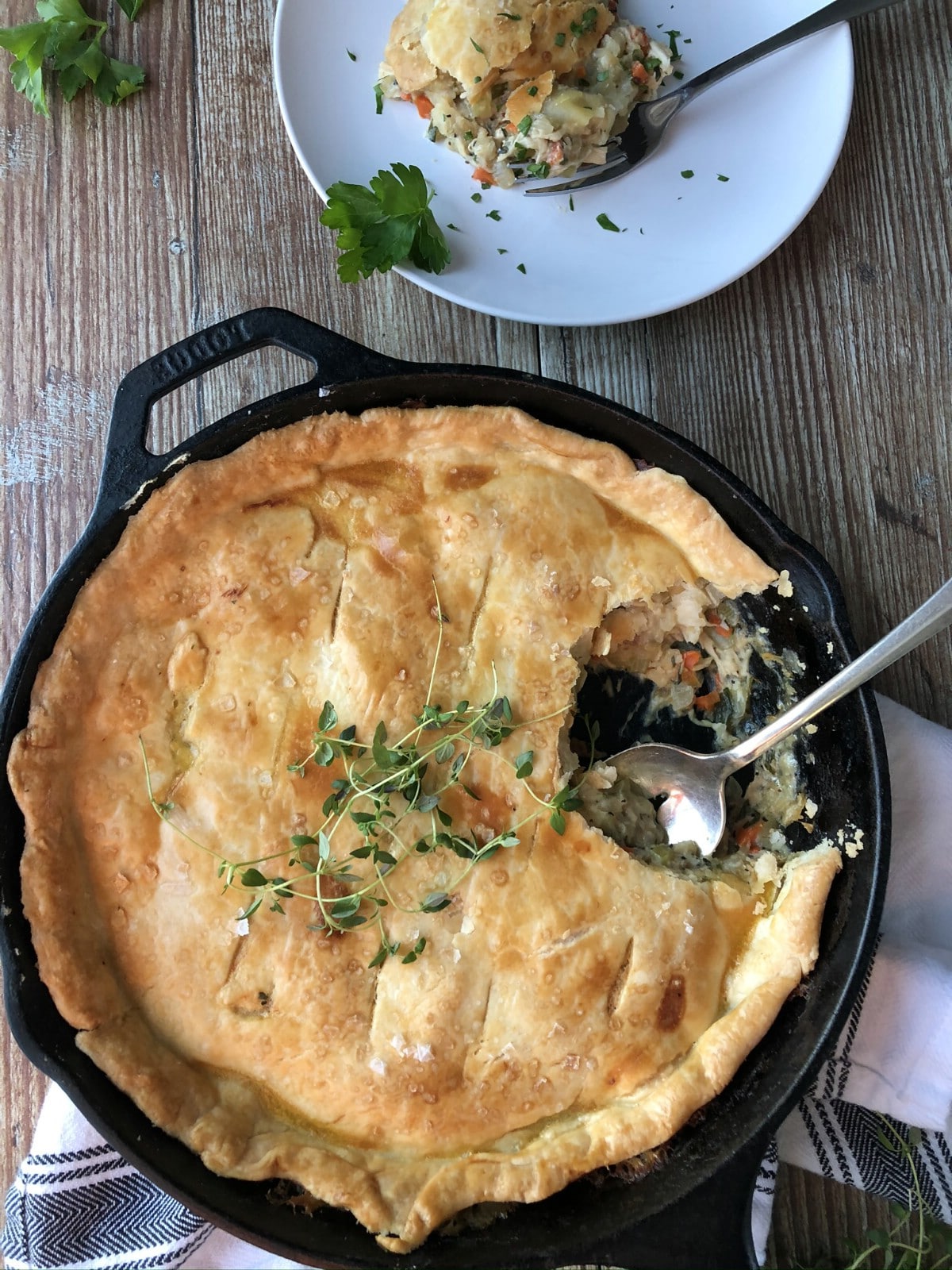 Here’s how it would go.

Every afternoon once school had wrapped, my mom would pick me up. After swinging my purple, over-sized bookbag into her car, we were off to find a mid-afternoon snack.

Sometimes it was chargrilled chicken sandwiches slathered with mayo, cheese, and cold, chopped lettuce. Often, it was caravanning me and some friends to the nearby café for toasted sesame bagels loaded with peppery honey mustard and turkey.

And on the hungriest of days, it was on route to my beloved Boston-based drive-thru for individual chicken pot pies and piping hot containers of creamed spinach. 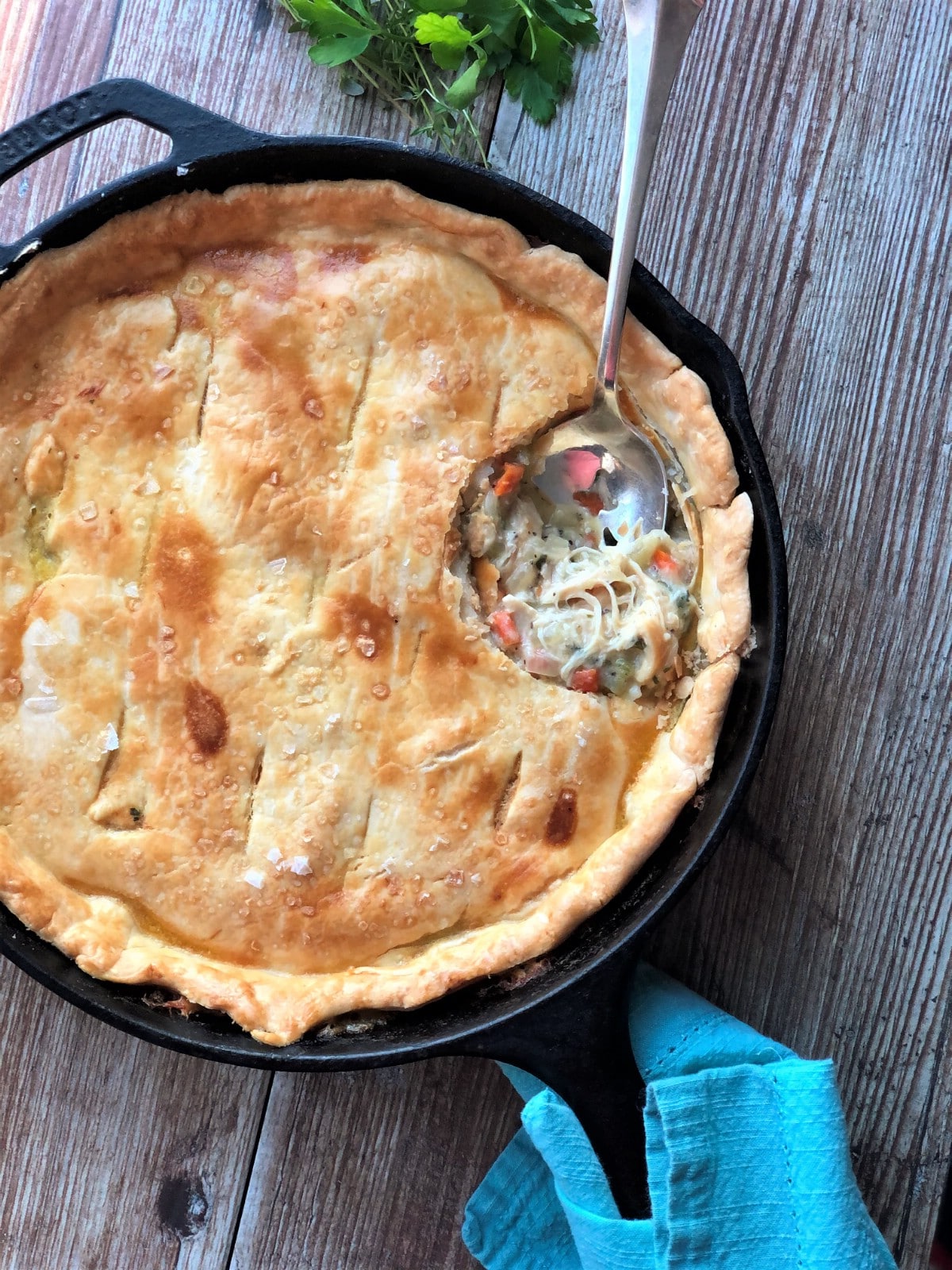 I’ve prepared my share of pot pies as an adult, and this spectacular skillet version instantly takes me back to those after-school, on-the-go meals with my mom.

Though prepping the chicken, stock, and crust entirely from scratch gives the whole dish more character and depth of flavor, it is a one-pan meal after all and meant to be quick. The fresh herbs and savory veggies folded into the creamy sauce will trick you into thinking it’s homemade anyway.

The only ingredient I’ve ever known my dad to despise is peas, so in his honor—I make them optional on this recipe list. If you’re a fan of the starchy green gobs, by all means, help yourself.

I prefer loading up on sweet carrots, earthy thyme, and fresh, herbaceous parsley.

The individual pot pie of my childhood was meant to be cracked directly into with a fork. So although this recipe guides you to slice and serve—go ahead and dive in before the guests arrive.

Step 1 – Chop and Sauté the Vegetables

Dice the onions and celery, mince the garlic, and chop the carrots and thyme. 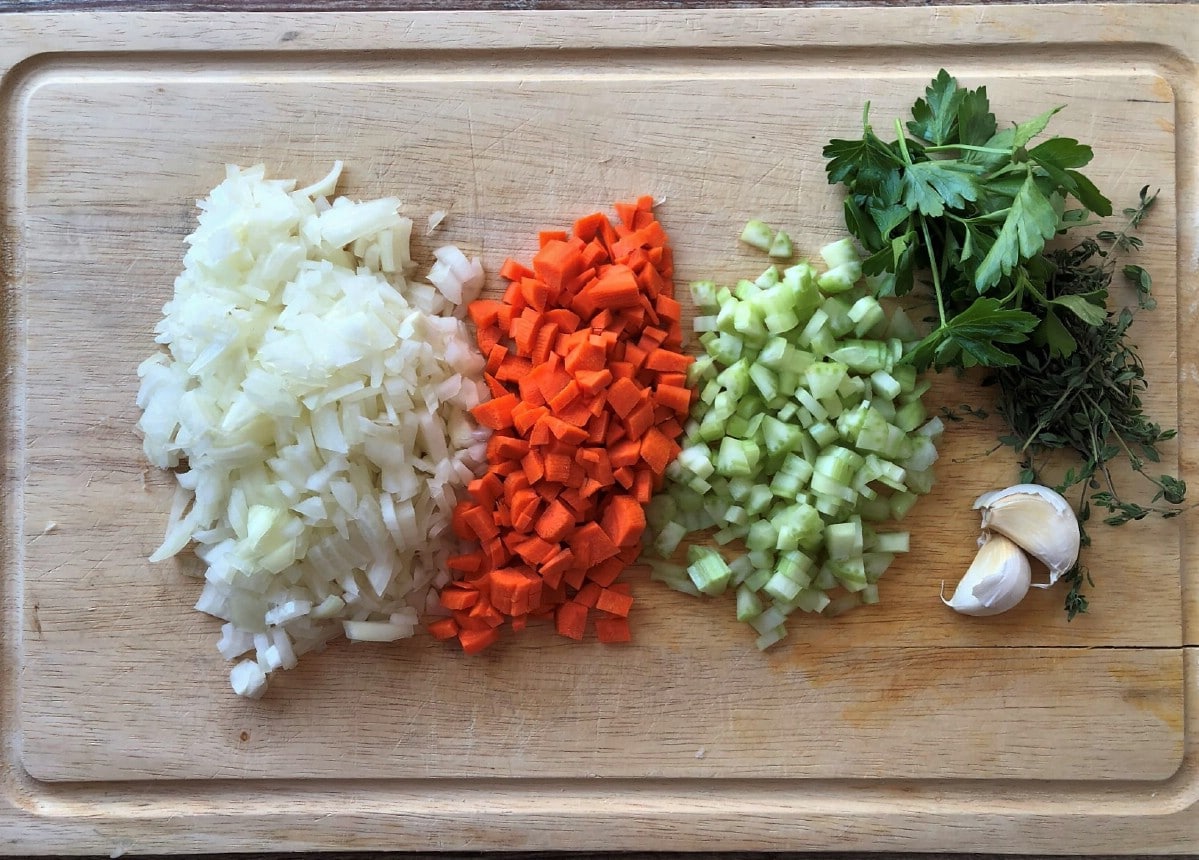 In a large cast-iron skillet, melt the butter over medium-low heat. Add the onions, garlic, celery, carrots, and thyme, and season with 1 teaspoon each salt and pepper. Sweat the mixture until the vegetables are soft and translucent, about 10 minutes. 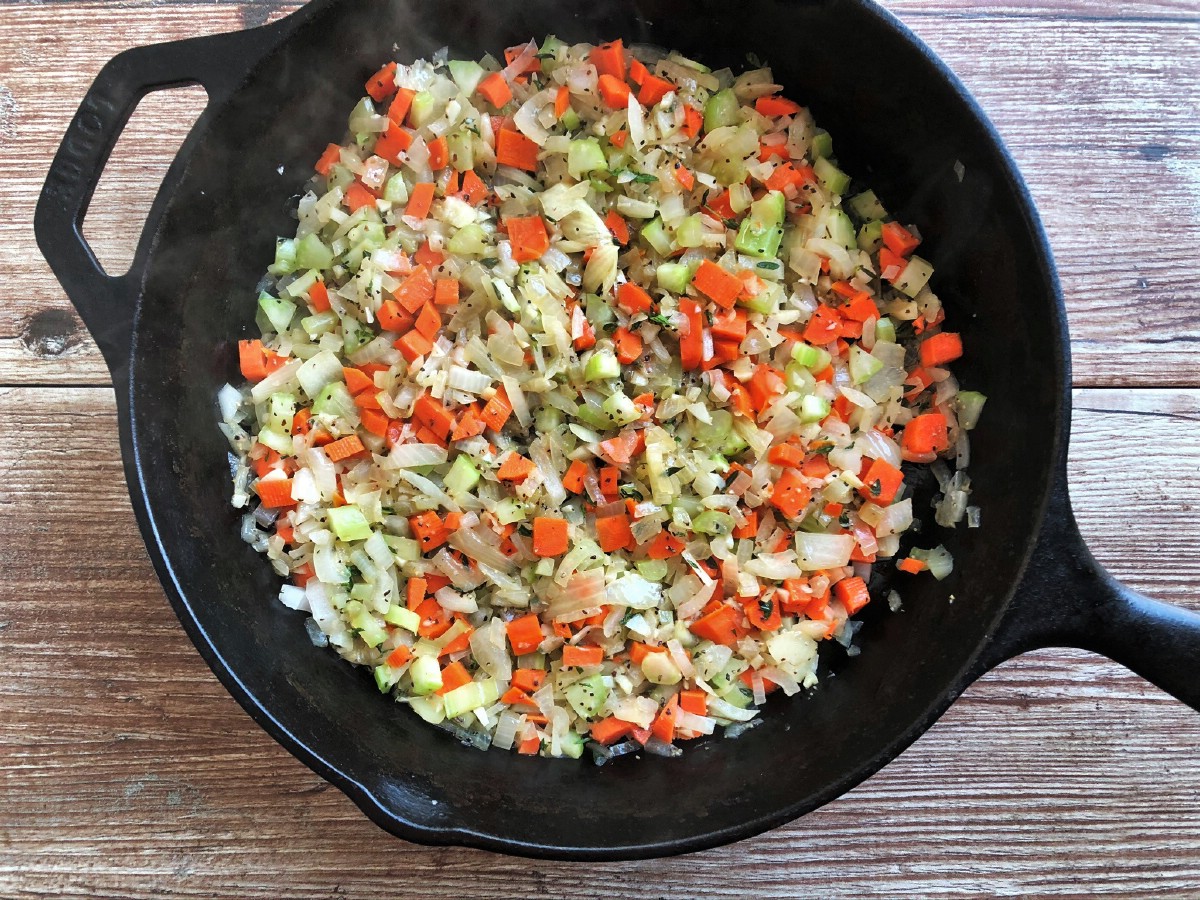 Reduce the heat to low, add the flour, and stir for 2 minutes.

Add the chicken stock to the sauce, turn the heat to medium, and continue stirring until the mixture has thickened. 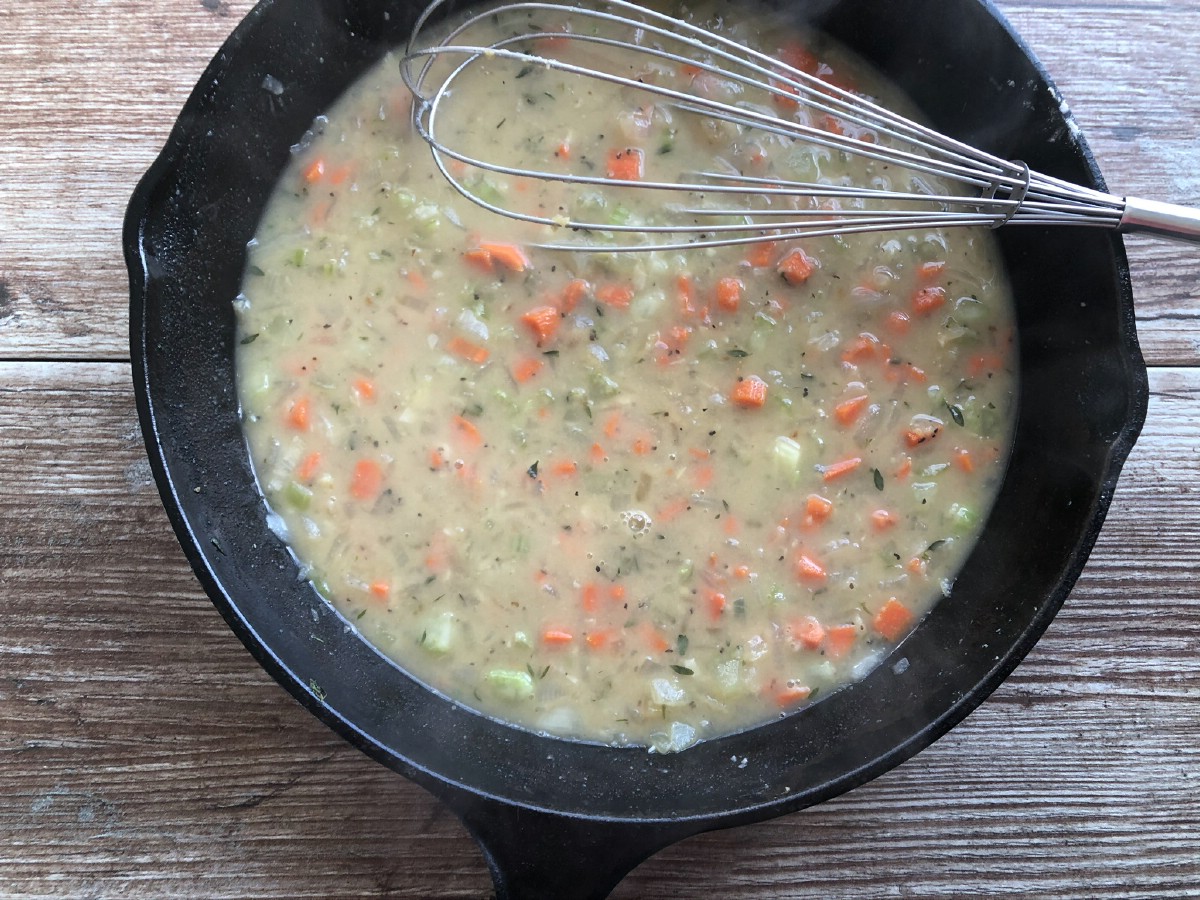 Stir in the half-and-half. 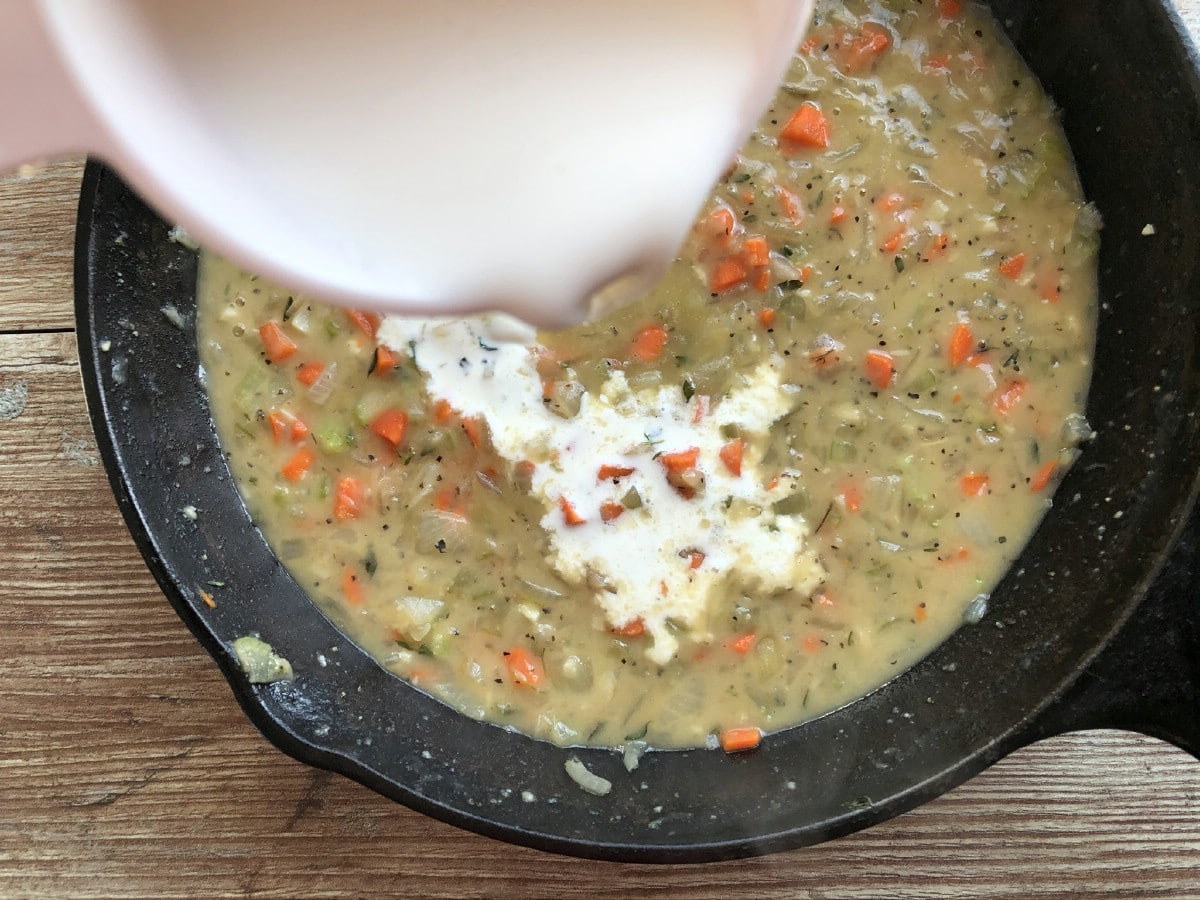 Fold in the shredded chicken, peas, and fresh parsley. Season to taste with salt and pepper. 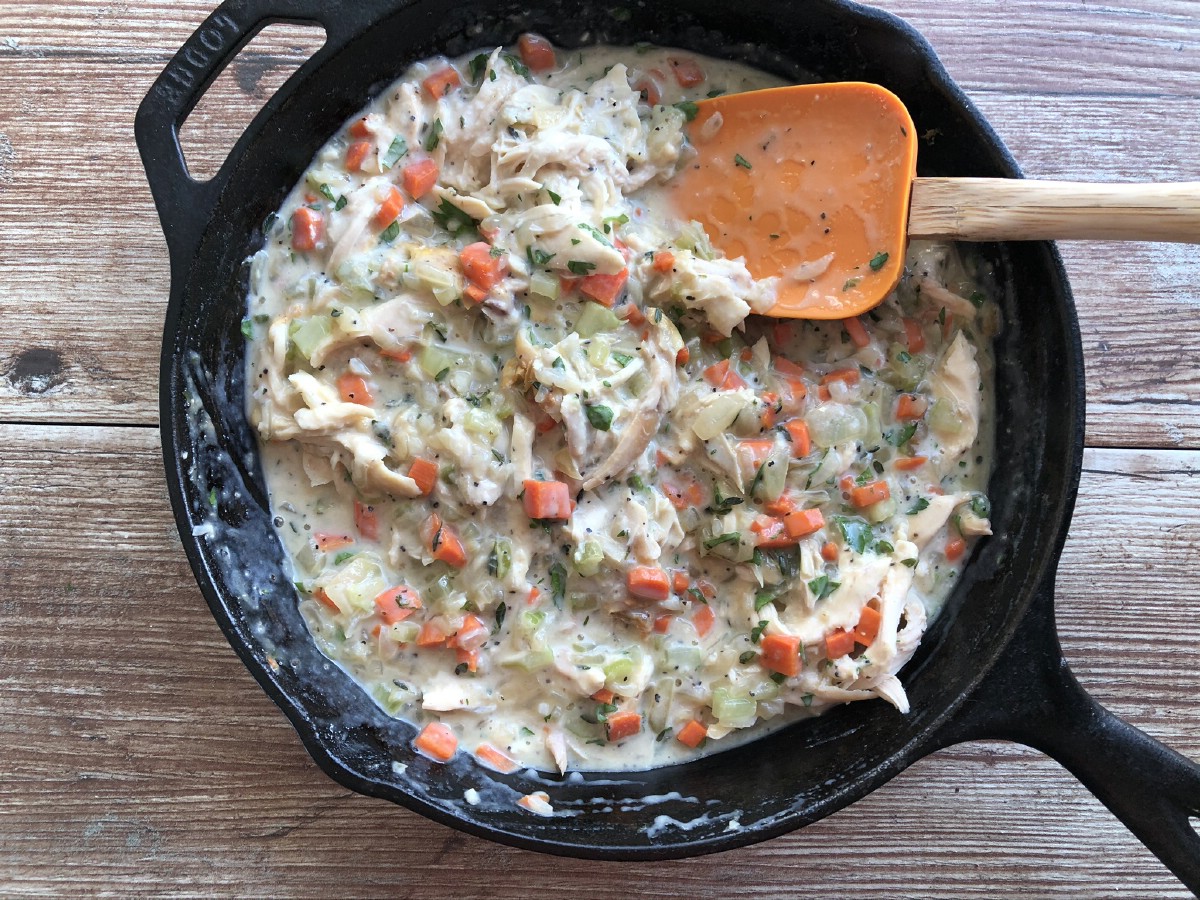 Step 3 – Prep the Crust and Fill the Pot Pie

On a floured work surface, roll out the chilled pie crust until its diameter is about 1-inch bigger than the diameter of your cast-iron skillet. Carefully lay the dough over the filling and cut slits in the top to create steam vents.

Step 4 – Brush the Crust with the Egg Wash, Bake, and Serve

Gently crimp the edges to seal, lightly brush the crust with the egg wash, and sprinkle with the flaky salt. 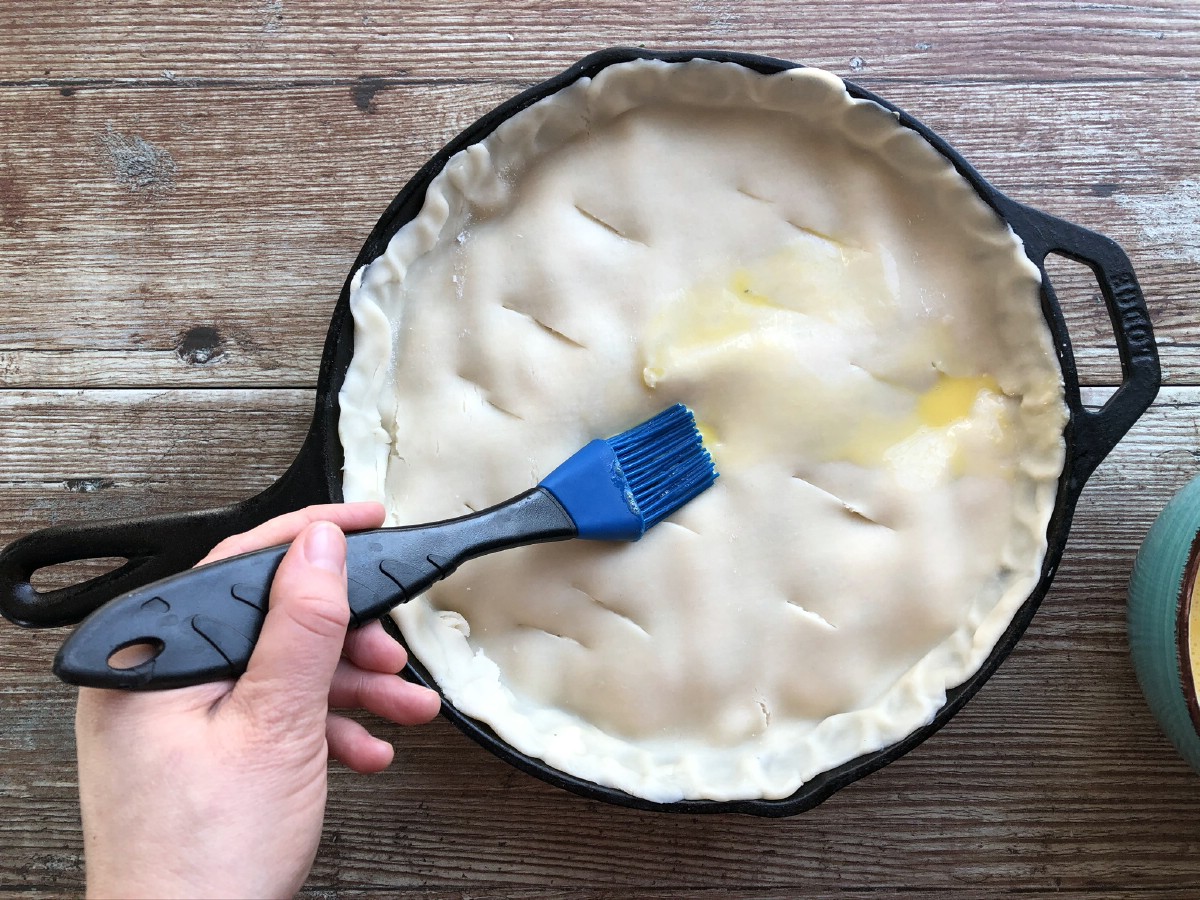 Bake until the filling is bubbly and the crust is golden brown, about 35-40 minutes. Allow the pot pie to rest for 5 minutes before slicing and serving. 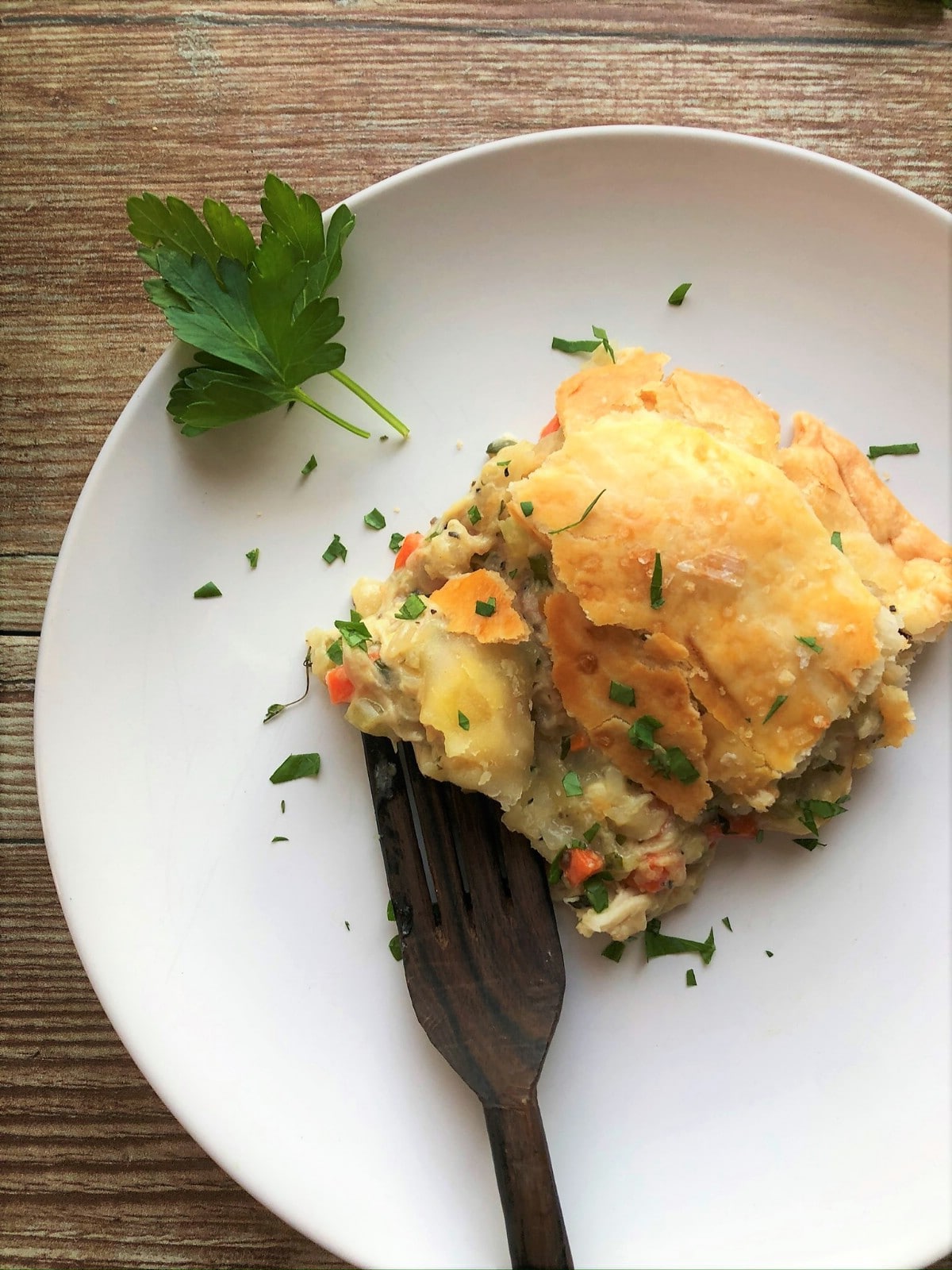 I don’t know about you, but I can’t imagine a more perfect way to spend an afternoon than diving face-first into creamy chicken soup nestled inside of a flaky crust. Fork or spoon?

The choice is yours.

If you’re motivated to customize this chicken classic and make it your own, try folding butternut squash into the mix for sweetness or stirring in spinach for an oomph of greens.

More creamy chicken things? Your wish is my command:

Chicken and Potatoes in a Creamy Sauce