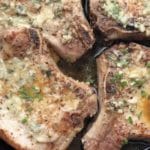 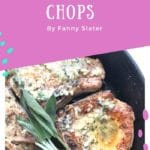 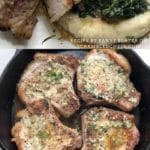 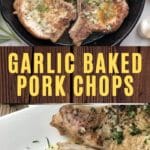 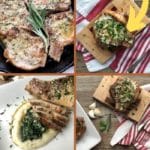 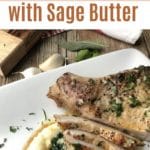 Okay. Are you ready to hear how stupid good these pork chops are?

Let’s go back to the first night I made them. I had cooked the chops in bulk and my husband and I chowed down until we had officially maxed out our pork meters.

I didn’t want the remainders to go to waste. So naturally, I froze the rest.

A week later, my husband decided he was once again ready to conquer the chops, and he took the leftovers to work. He returned home with a Tupperware container that had been licked clean and with wide eyes, he exclaimed,

“Holy pork chops, Batman, those were even better than the first time.” 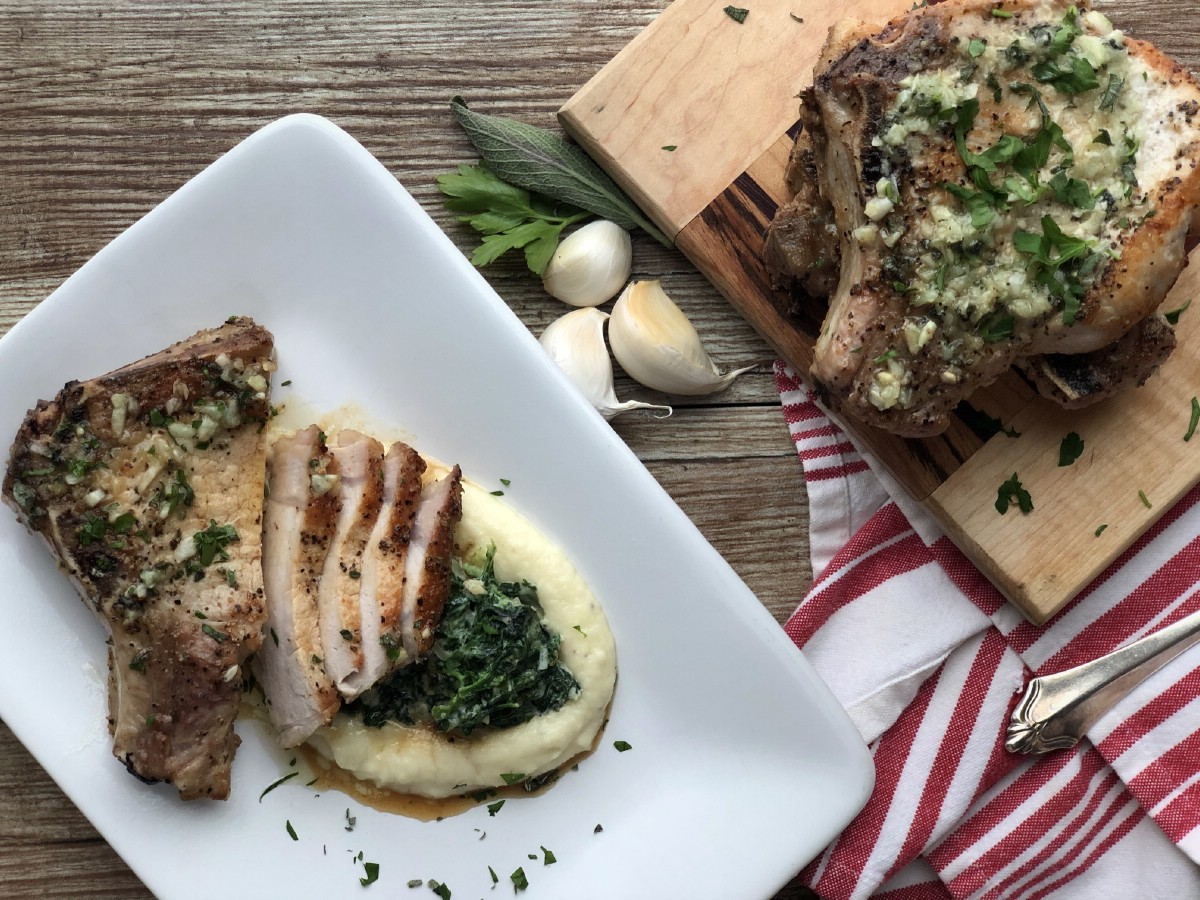 Frozen seconds that were twice as good as when made fresh? Yes. Correct. You read that right.

There’s something magical about these chops and, while I typically like to keep some culinary secrets to myself, I think this one is pretty obvious.

There’s no debate that butter makes everything better. There’s a great line in the movie Julia & Julie (which depicts the tale of a blogger who cooks her way through Julia Child’s cookbook) where the main character marvels in the magnificence of butter.

Here goes, not only my very favorite quote from that scene, but also a guideline I like to live my life by.

“I cooked artichokes with hollandaise sauce which is melted butter that's been whipped into a frenzy with egg yolks until it's died and gone to heaven. 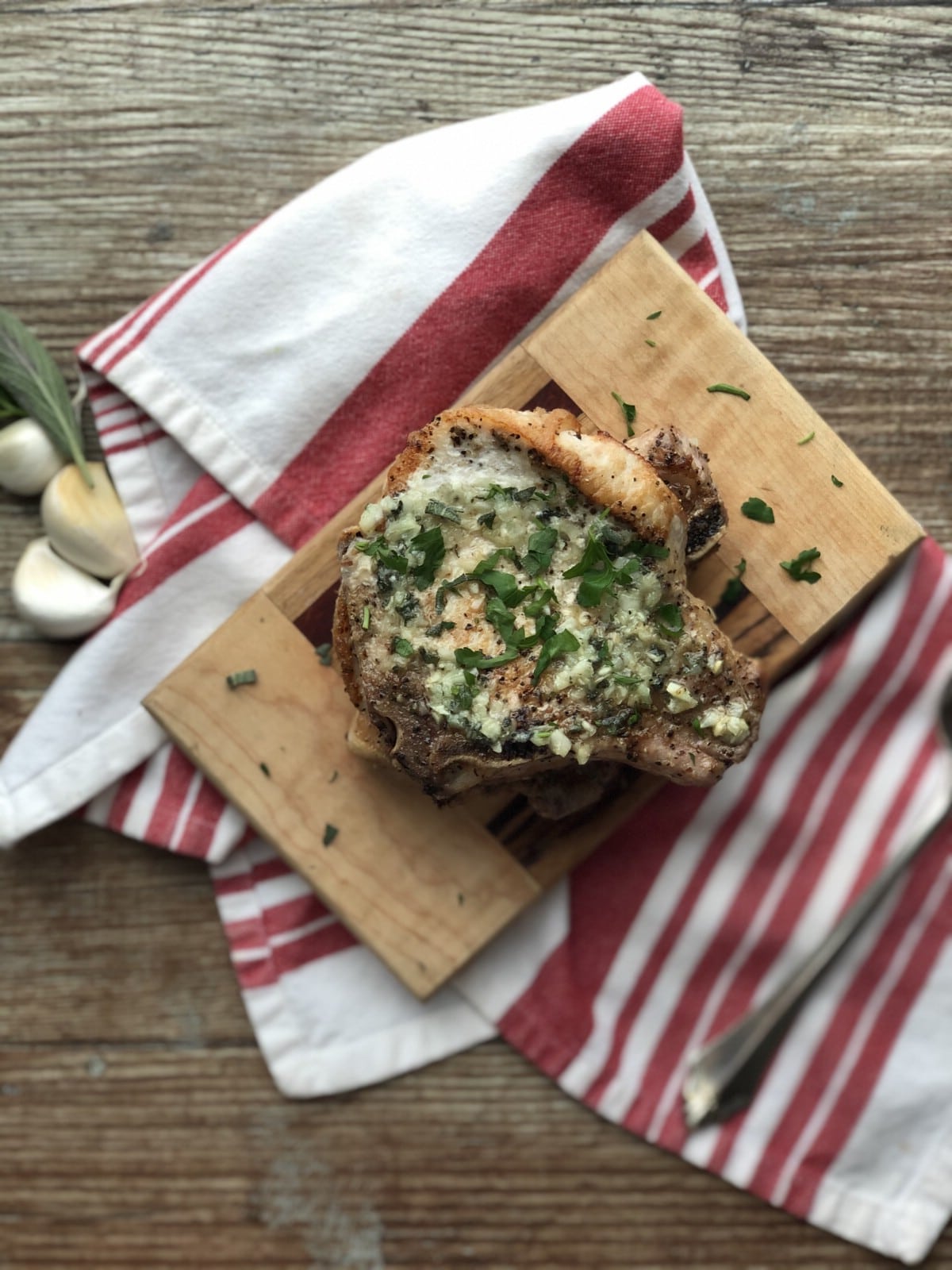 And let me say this: is there anything better than butter?

Think it over: Every time you taste something that's delicious beyond imagining and you say, ‘what is in this?’, the answer is always going to be: butter. The day there's a meteorite heading toward the earth and we have thirty days to live, I am going to spend it eating butter.

Here's my final words on the subject: you can never have too much, butter.”

Since I’ve just unapologetically acknowledged my obsession with butter, I might as well continue on the transparency train and share another confession.

I’m not a huge fan of pork chops.

There. I said it. 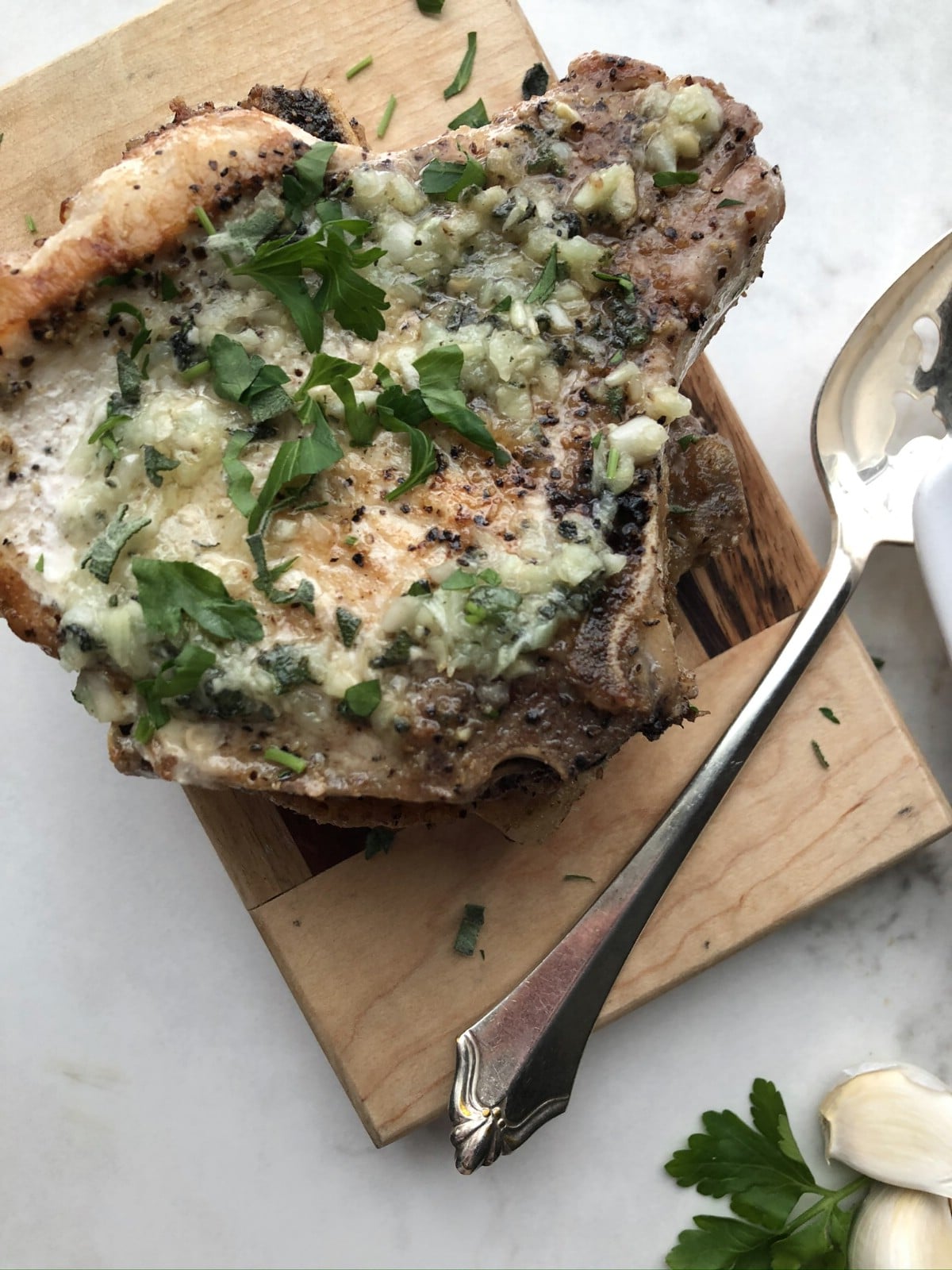 My parents stopped eating red meat many years ago, but had no problem with my sister and I continuing to be carnivores who could always get down with a cheeseburger. However, when it came to pork chops–they were simply never around (and something I didn’t really care to request).

Pork chops might act as childhood nostalgia for many, but not for me. Our rotating family dinners consisted of lemony crab cakes, rosemary-garlic roasted chicken, and juicy ground turkey meatballs.

Even as an adult, I’m not particularly drawn towards pork.

Don’t get me wrong.

I’m the first of my friends to murder a bacon, egg, and cheese biscuit sandwich on a Sunday. But when I’m breezing through the grocery store aisles debating what to make for dinner, I almost never—and I mean never—scoop up a package of pork. 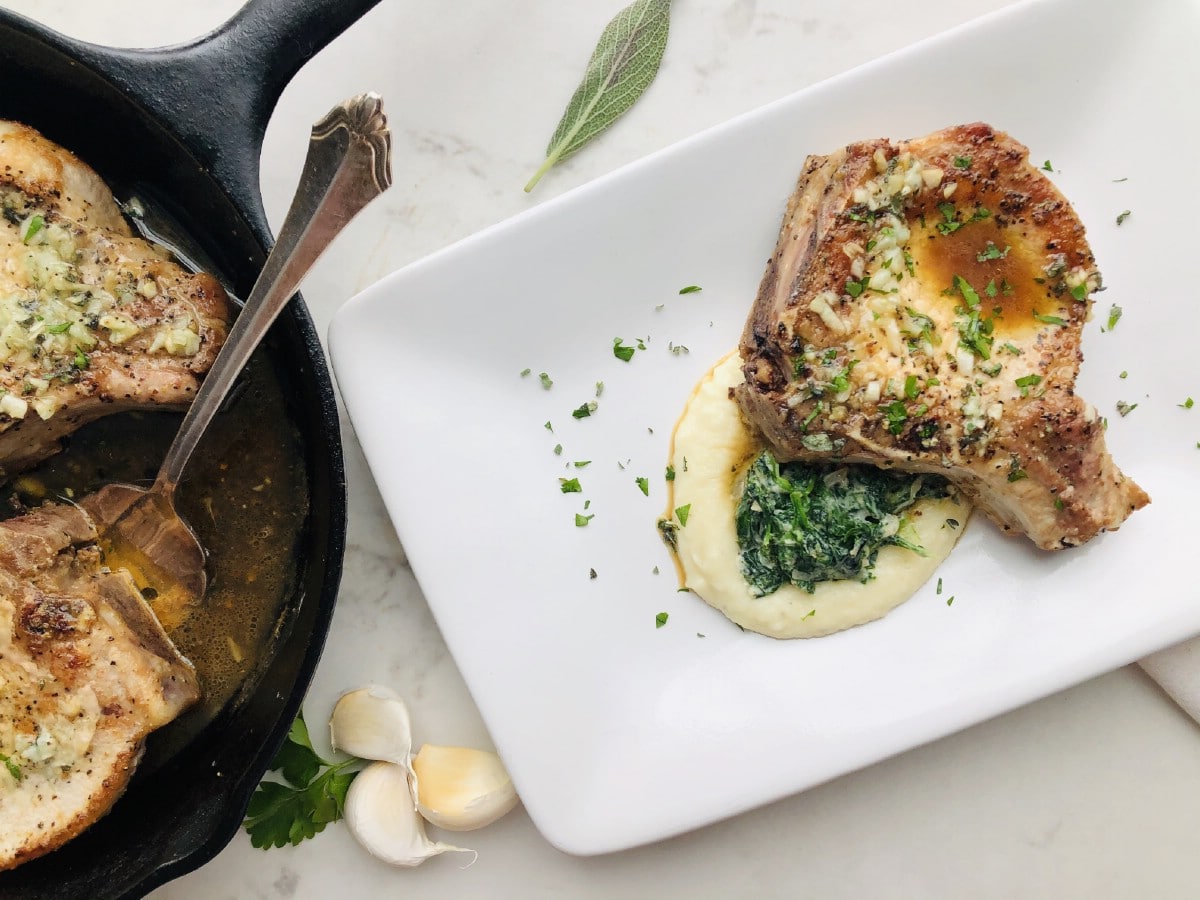 Once I tasted these juicy garlic baked pork chops, my entire mentality changed.

I had always thought of pork chops as outdated, flavorless, and dry. Boy, was I wrong.

When given a crispy, golden-brown crust and a butter bath of rich garlic and woody sage—holy pork chops, Batman. Sign me up.

As I pork chop novice, I decided to do my research on the topic before diving into the recipe, and I’m glad I did. 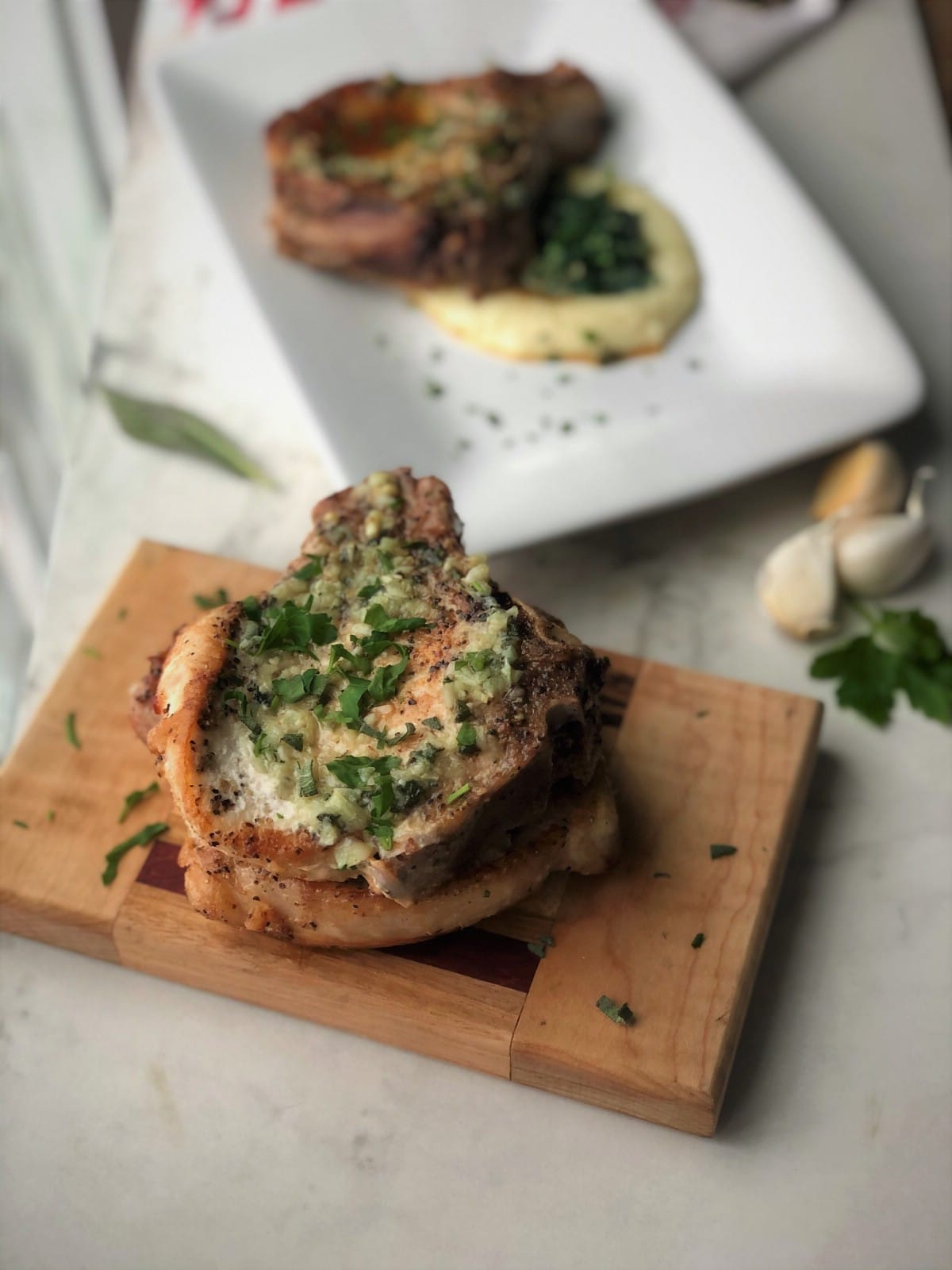 Think there’s only one kind of chop? Think again.

Depending on your flavor preferences, and more importantly—how you plan to cook the chop, the variety you pick is quite the priority. For example, some cuts can be tough and require slow-braising, where others are tender and can be pan-seared in a pinch.

First, you’ve got shoulder chops (also often referred to as blade chops). These fattier, darker-colored cuts have a decent amount of gristle. On the plus side, they’re packed with flavor. On the other hand, they require a touch more TLC like being tenderized or braised in low heat (such as in a slow cooker).

Rib chops, often called center-cut, have a big old belly of lean, tenderloin meat in the middle, but also offer the best of both worlds thanks to the long bone that runs along the side and an outside layer of fat. They’re perfect for this recipe and respond like a pro to the sear-roast method used.

Loin chops have a T-shaped bone that separates the loin from the tenderloin. These are extremely lean, mild, and should be cooked quickly but carefully to ensure that you don’t overcook one section.

Next up, the boneless boys. This is the classic “America’s cut” that boasts almost no fat and zero bones. Though these are the least flavorful of the bunch, their boneless-ness makes for easy chopping and throwing into a marinade. You’ll want to brine them, if possible, and then grill, broil, or sear.

Last but not least, the sirloin chop. While this cheaper cut is known for having a prominent pork flavor, the high percentage of bone makes it easy to accidentally overcook. Braise this baby low and slow. 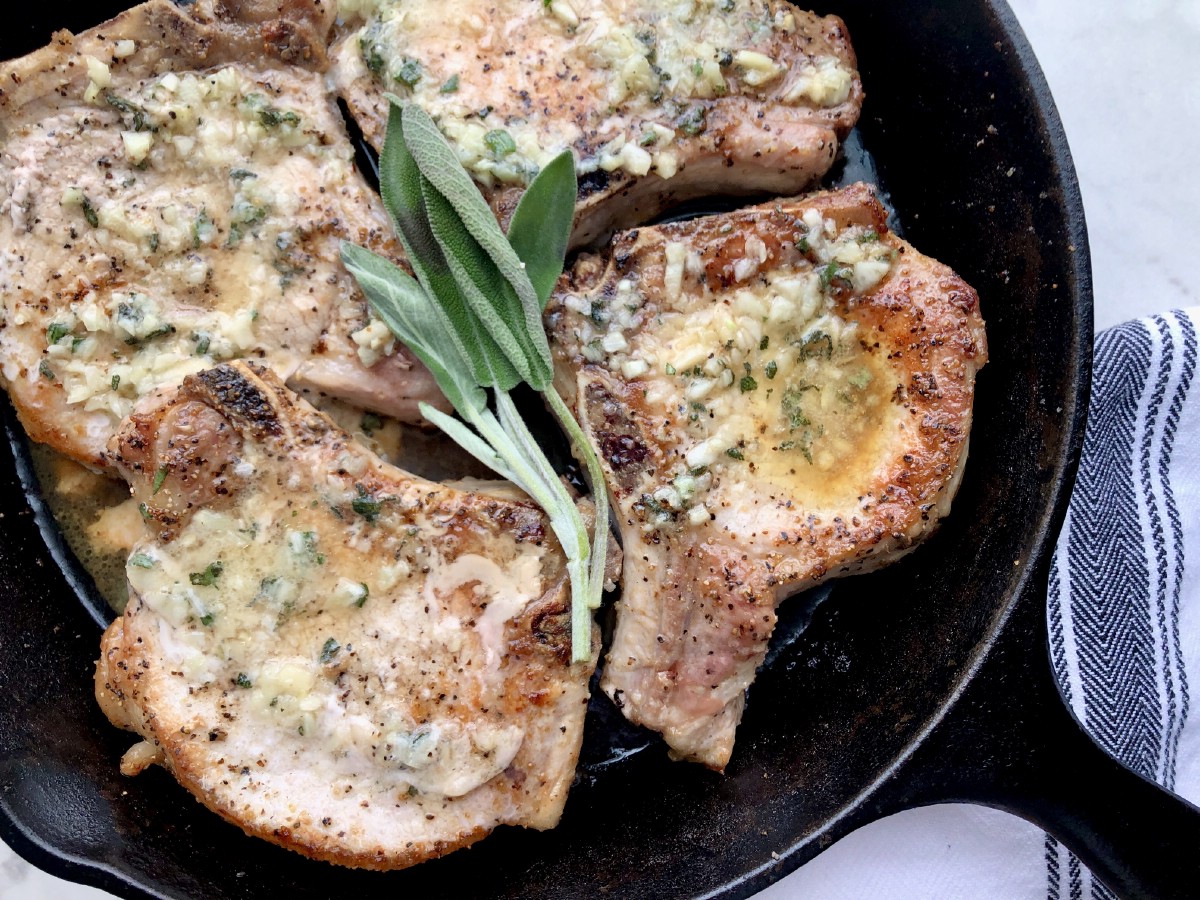 Now that you know everything there is to know about pork chops, what are you still doing sitting here? Grab all the garlic and sage you can find and get to work.

And in the spirit of Julia Child, remember that you can never, ever have too much, butter.

Cooking By the Numbers…

Mince the garlic and chop the sage and parsley. 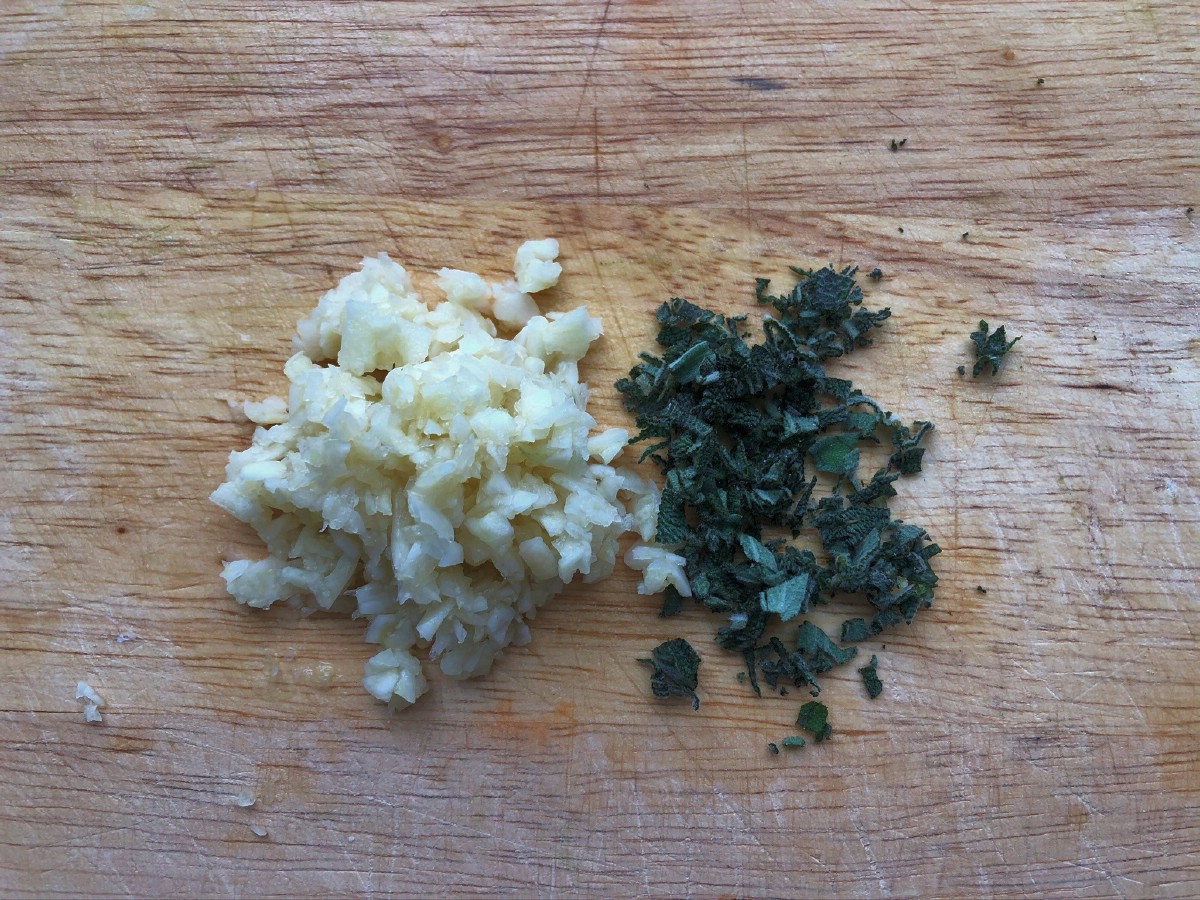 In a small bowl, mix together the butter, garlic, and 2 tablespoons sage and season with a pinch of salt. 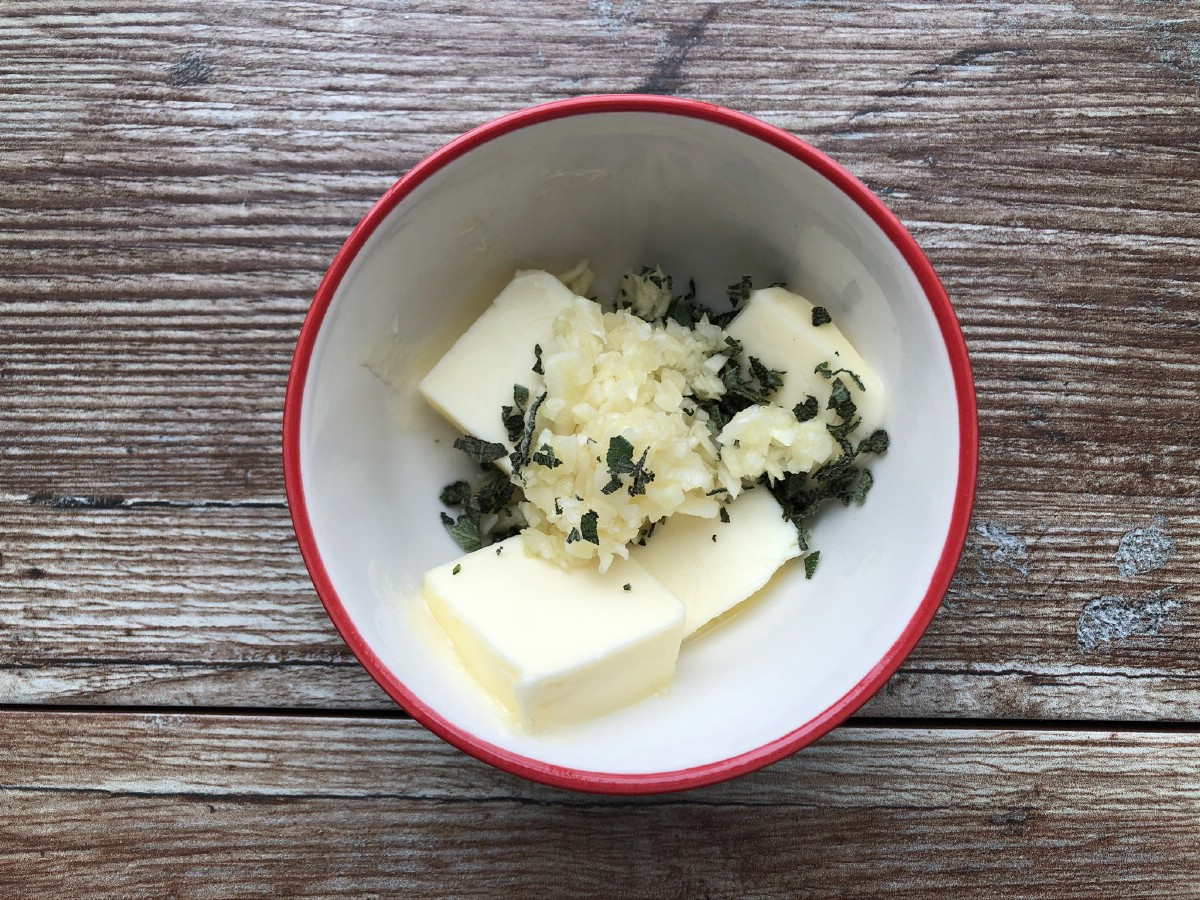 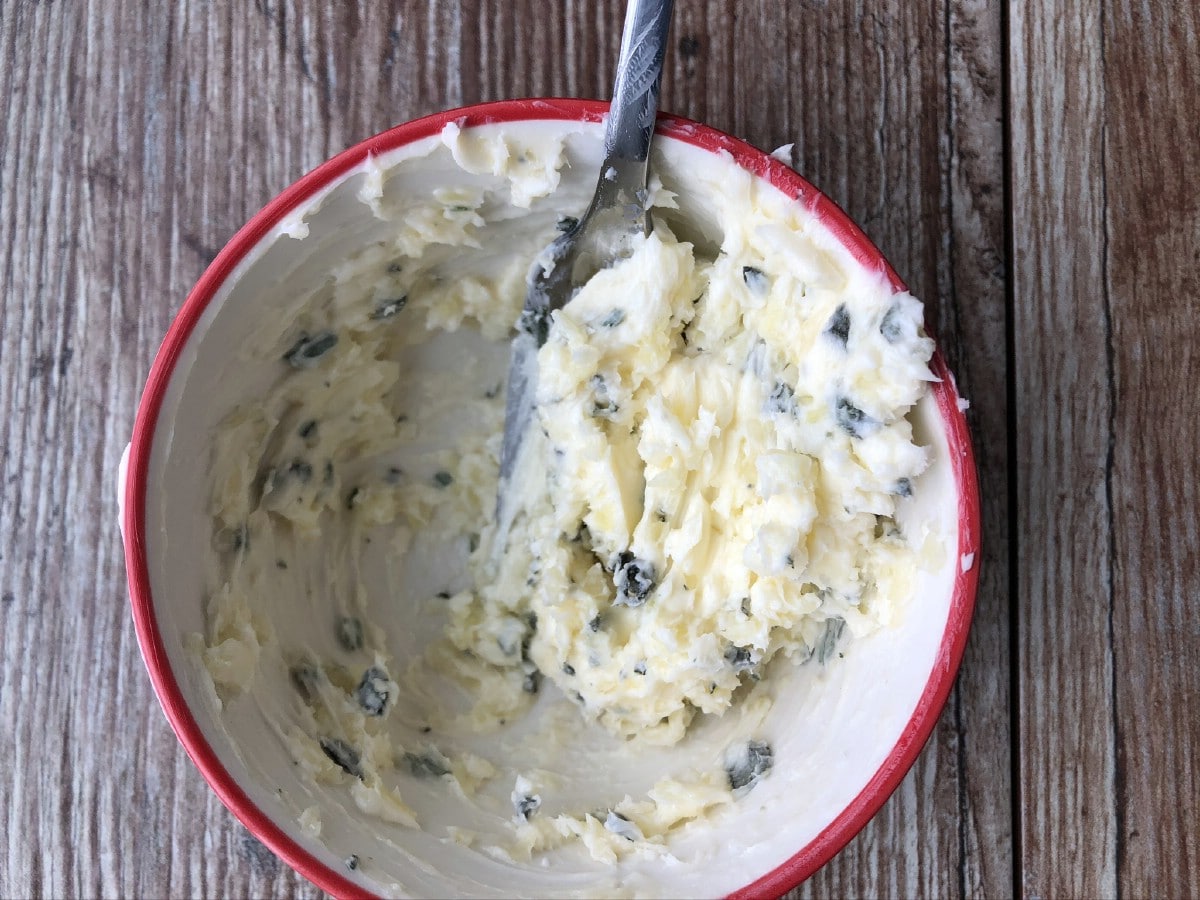 Dry the pork chops with paper towels and then season on both sides with the salt and pepper. 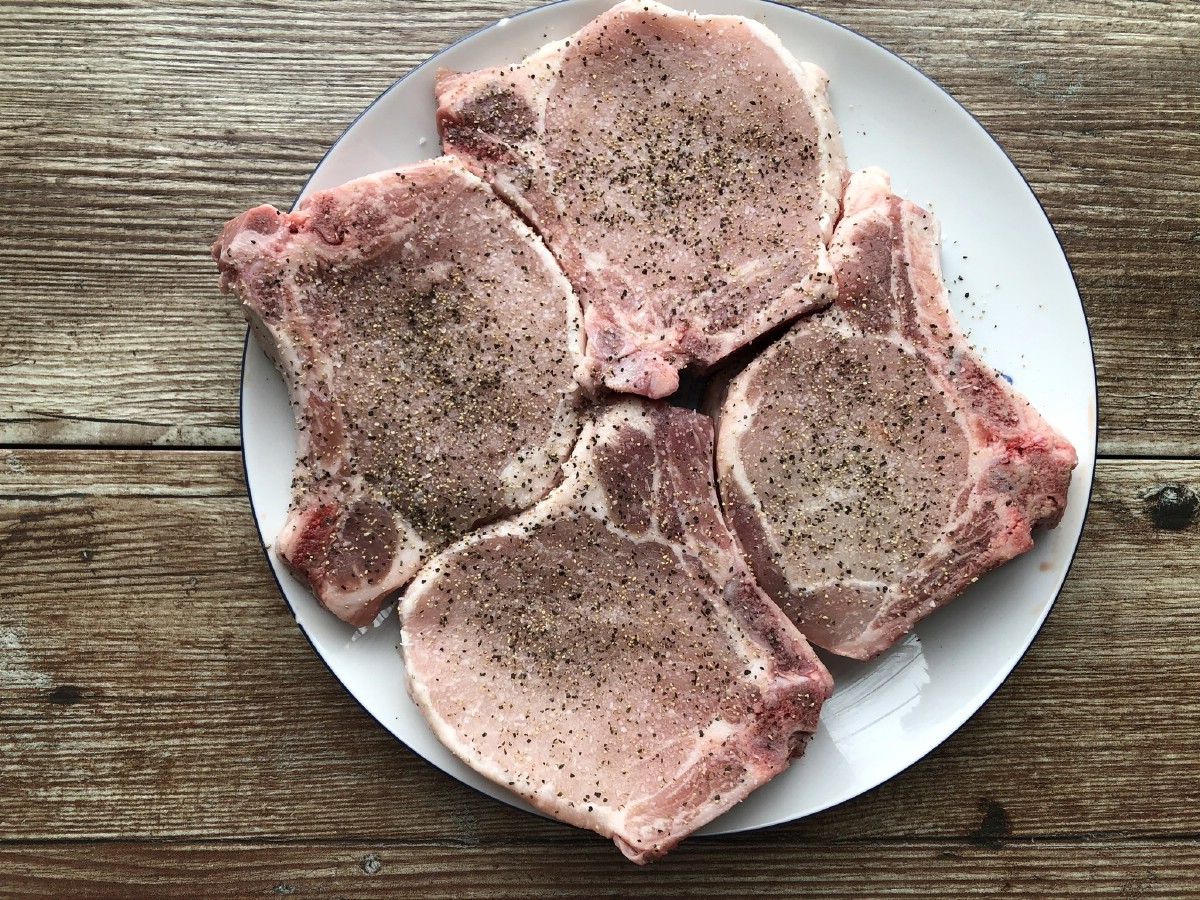 The dryer the meat is, the better the sear will be. In a heavy-bottomed, oven-proof pan like a cast-iron, add the oil over medium-high heat and swirl to coat the pan.

Sear the pork chops until golden brown and caramelized, about 1-2 minutes per side.

Step 3 – Add the Butter and Wine and Bake

Evenly scoop the sage-garlic-butter over the pork chops and pour the white wine into the pan. 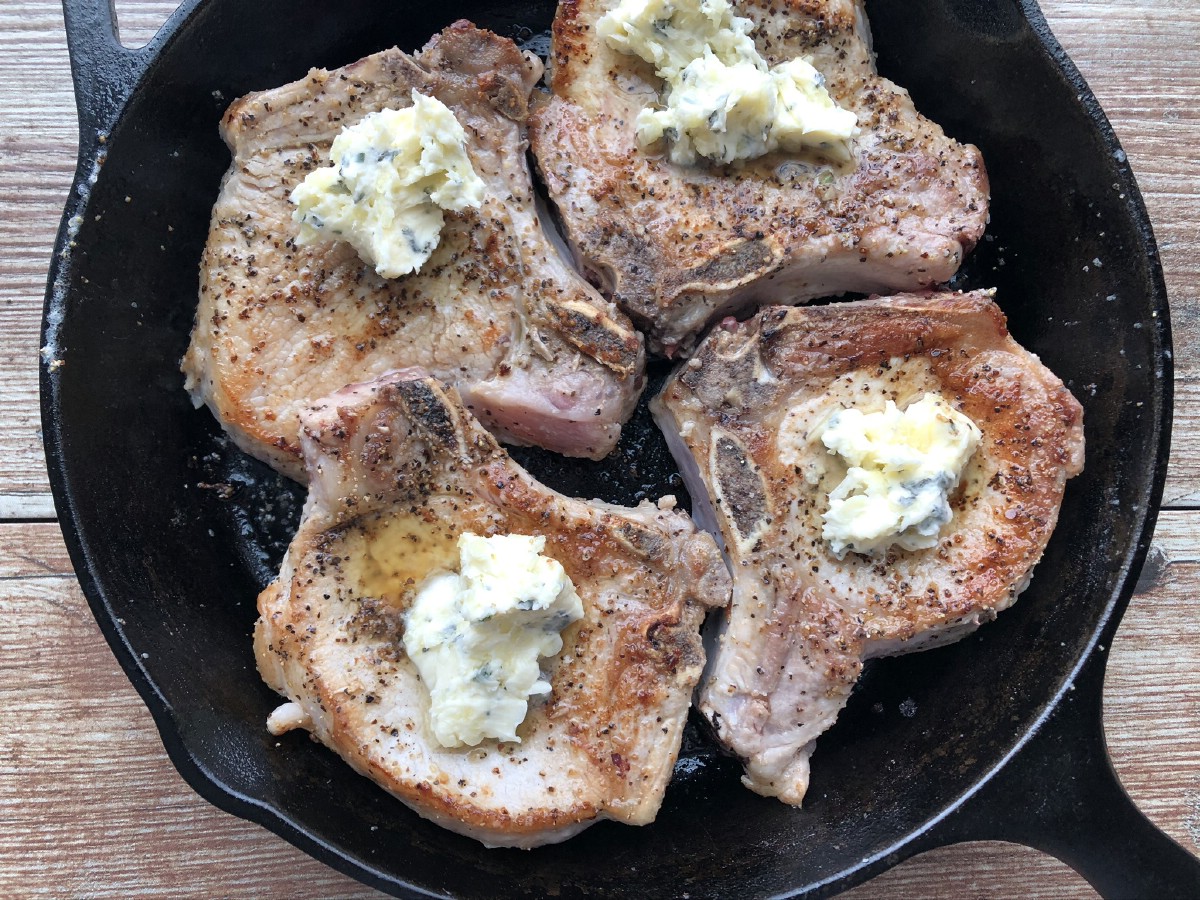 Place the entire pan in the oven and cook until the pork reaches an internal temperature of 145° F, about 8-10 minutes.

Remove the pork chops from the oven and spoon the pan juices over them while they’re resting.

Divide the pork chops among plates, pour the remaining pan juices over them before serving, and garnish with the remaining sage and parsley. 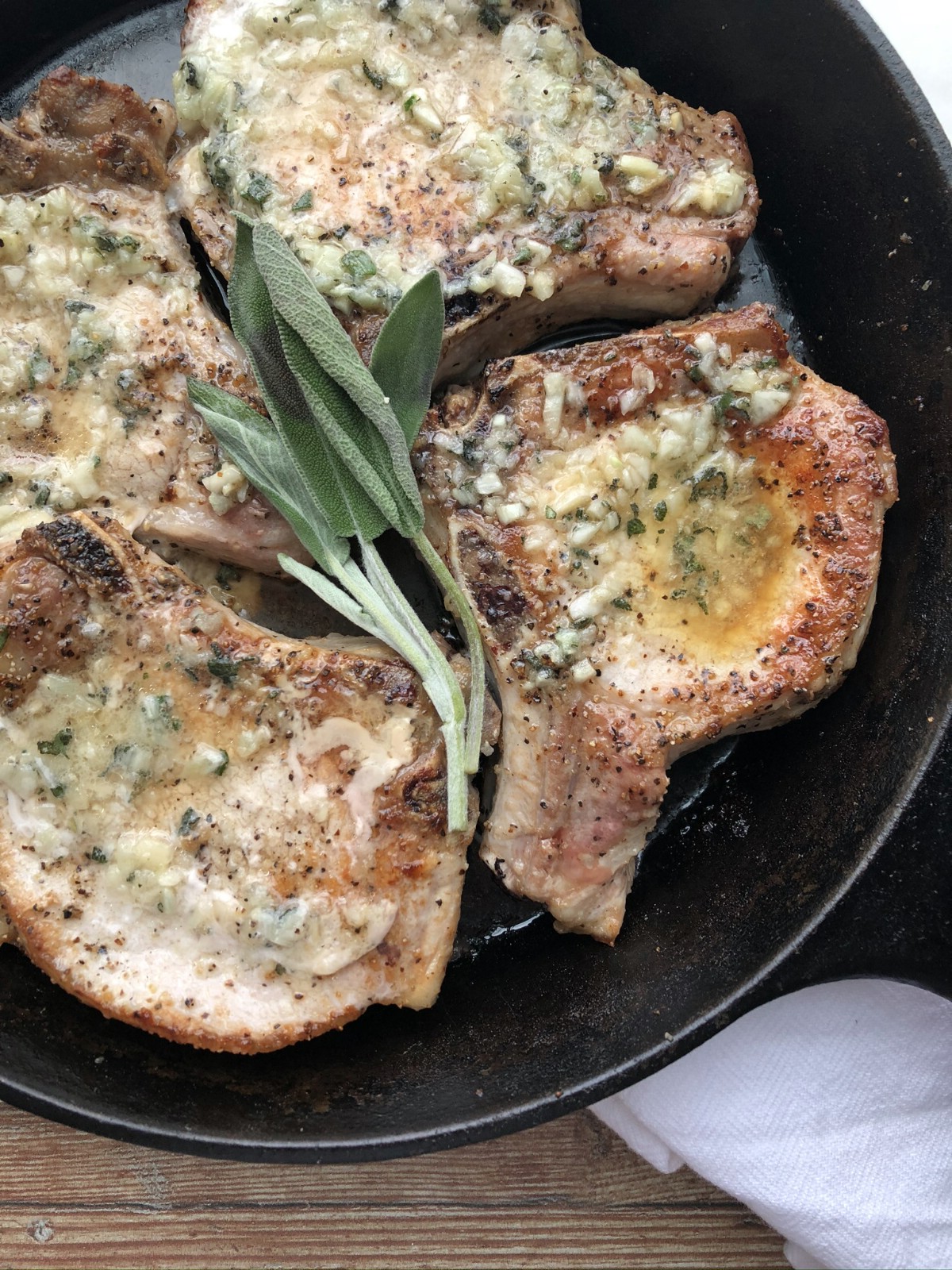 You may think there’s no such thing as perfection when it comes to cooking, but one buttery bite of these garlicky chops and you’ll be singing this pork’s praises.

While your mouth is open, don’t forget to gobble up a yummy starch alongside it all. Mashed potatoes, crusty bread, and wild rice will all soak up all the that rich, herby sauce like a boss.

Those were some powerful words on pork. Still hungry? These additional pork-centric recipes are sure to satisfy: