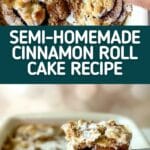 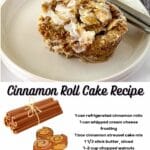 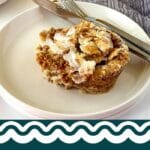 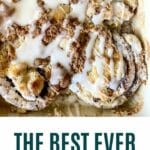 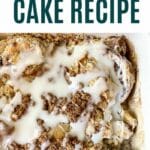 Cinnamon roll cake is one of those recipes that is super rich but absolutely perfect recipes that is both semi-homemade and still decadent. I love how easy this is to throw together and that it's something you can serve as a dessert, or could serve as a coffee cake or breakfast if you wanted.

In recent years, "dump cakes" have become super popular. One of those is this cinnamon roll cake that uses refrigerated tubes of rolls and a basic dry cake mix to create a layered decadent dessert that is sure to wow a crowd.

If you like this recipe, then you will probably also like the authentic Amish cinnamon bread, decadent cinnamon rolls with cream cheese, or even this cinnamon roll pancake recipe!

Add this delicious combination of sweet rolls and cake mix to your menu to create the perfect sweet breakfast or rich dessert. An ideal option to serve alongside your favorite coffee or tea.

This semi-homemade recipe uses a few items you can buy already made and then thrown together to bake and create something totally new. The process allows you to be a part of preparing the dessert, all while saving time and effort!

The best thing about this recipe is that it really doesn't require much other than the baking dish. Of course, you can make this in a different sized pan, but it is best in a square 8" or 9" baking dish.

How to Make a Cinnamon Roll Cake

Preheat the oven to 350°F and lightly butter or spray the bottom of a 9" square baking dish.

Open the can of cinnamon rolls and place them in a single layer at the bottom of the baking dish.

Cover the top of the cinnamon rolls with the cream cheese frosting.

Then sprinkle on the chopped nuts.

Sprinkle the dry cake mix over the top of the nuts.

Slice the butter and place in rows over the top of the cake mix.

Sprinkle the streusel topping from the cake mix over the butter on the cake.

Bake for 40 to 45 minutes until golden brown on top and cooked through.

Remove from the oven and drizzle with the icing from the tube of cinnamon rolls or a simple vanilla glaze.

Below are answers to some of the more common questions we see about this cake recipe. Check them out before you bake to make sure yours turns out fantastic every time!

Can I Make This With Homemade Cinnamon Rolls Instead?

You can definitely do this same thing when making homemade cinnamon rolls. Just place the rolls into a baking dish as directed on their own recipe, but before baking, follow the recipe above with the addition of the cream cheese frosting, walnuts, and the cake mix with streusel topping.

What Other Cake Mix Can I Use?

While I love the addition of the streusel topping in the cinnamon streusel cake, you could also easily use a spice cake mix, yellow cake mix, or even a cinnamon sugar or sweet bread mix instead.

What If My Cinnamon Rolls Don't Come with Icing?

If you don't have ready-made icing with your refrigerated rolls, you can easily make your own or use a basic tub of vanilla frosting. You'll need ½ to 1 cup depending upon how much you want on the cake.

To make the homemade glaze, use 1 cup powdered sugar, 3 tablespoons milk, and ½ teaspoon vanilla extract. Mix together then drizzle over the cake once baked.

Relted Recipe
Easy Christmas Sugar Cookies with Homemade Glaze
Do I Have to Refrigerate This Cake?

No. It is not necessary to refrigerate this cake after it is baked. It will, however, need to be covered tightly with plastic wrap or in an airtight container.

How Long is Cinnamon Roll Cake Good For?

This cake is good for 3 to 4 days when stored at room temperature. If stored in the refrigerator, it is good for up to 1 week.

Variations of the Cinnamon Roll Cake

While this is a great recipe just as listed, you may want to mix things up a bit to make it your own. Above I mentioned using your own homemade cinnamon rolls as a base or even using a different cake mix. Below are a few more ideas that turn out excellent.

If you like this decadent cake, then you may also enjoy some of out other favorites. Whether it is something you want to serve your family or take to share with others at an event, below are some of my other favorite recipes that are delicious and definitely feel rich. Make sure to bookmark the recipes, print the recipes, or pin them to your cake board on Pinterest!

This can be made ahead of time and reheated before serving.