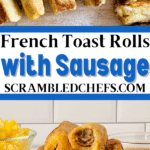 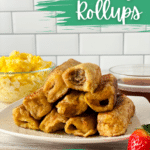 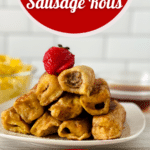 A batch of sausage stuffed French toast roll-ups is the perfect way to start your day! Use your own favorite sausage to create this easy on-the-go breakfast idea. You can eat with or without syrup, serve alongside other favorite dishes at brunch, or simply tuck into your kid's lunchbox for a yummy treat that is absolutely delicious! 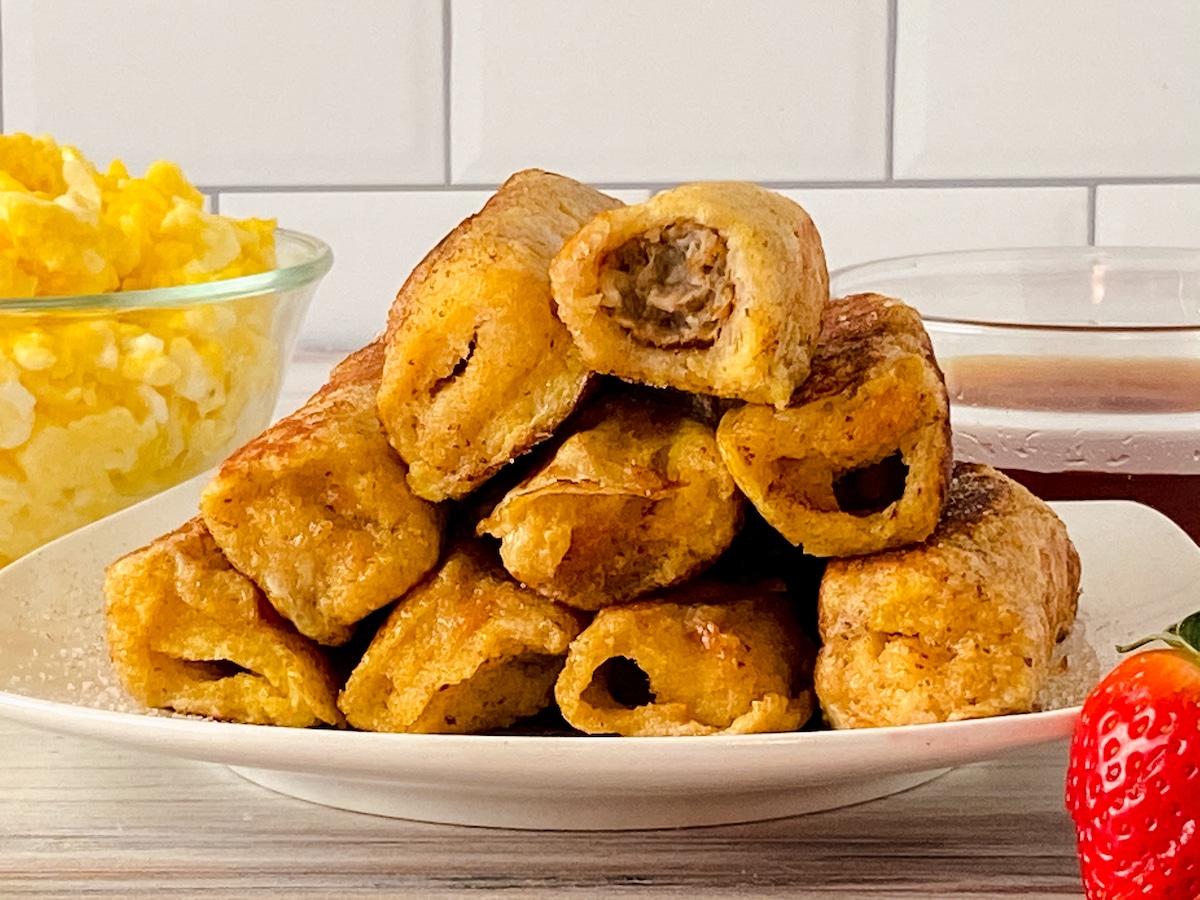 Breakfast is that all-important meal of the day that never has to be boring. Kids and adults alike love French toast with the crispy outside, soft inside, and delicious sugar and cinnamon flavors, but this update on that classic is a new favorite. Adding ready-made cooked sausage to the center of your bread and rolling it creates a little tube of deliciousness that is easy to cook, perfect for portion control, and creates an all-in-one meal on the go.

If you want a similar flavor without the sausage middle, you can make these cinnamon roll French toast roll-ups. Of course, the best classic French toast never fails to impress, and when you are wanting the flavor but an easier prep, you can make a batch of this cinnamon French toast bread pudding instead!

Is This Stuffed French Toast Without Cream Cheese?

Yes. This particular stuffed cream cheese does not include cream cheese. Rather than an all-sweet version, this one focuses on a light amount of cinnamon sugar and a piece of savory sausage. It's easy to make and doesn't require a lot of extra ingredients.

What Bread is Best for French Toast?

The most important part of the brad used in French toast is that it is slightly stale. This allows it to soak up that batter better to create the nice crisp outside you are looking for in French toast. Below are a few different types of bread that are also exceptionally tasty in any French toast recipe, and sure to be a hit with this recipe. 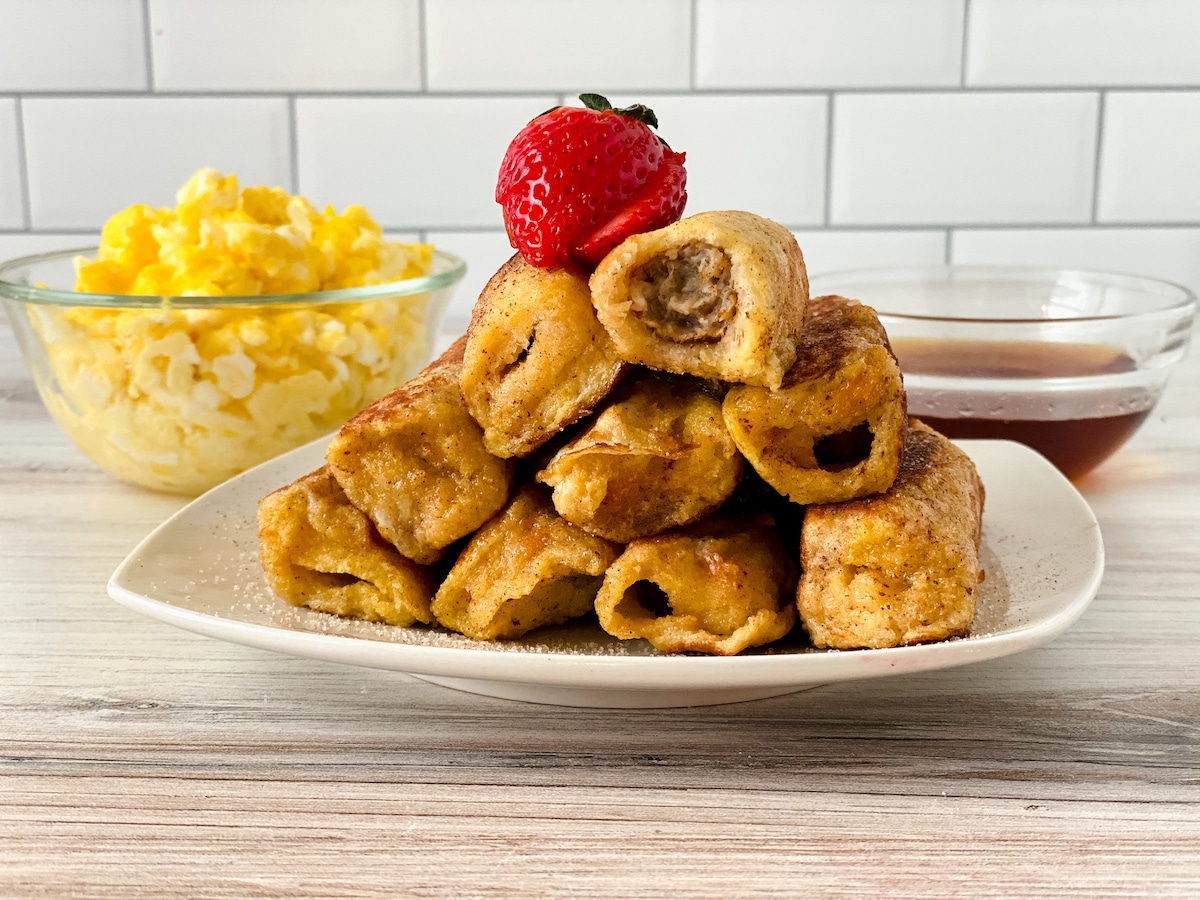 What Can You Dip Sausage French Toast Into?

After your roll-ups are done cooking, it's time to serve them up with your favorite toppings and dips. Sweet breakfasts like French toast, pancakes, and waffles are almost always served with a yummy dipping sauce, and while the syrup is common, that's not all. Below are a few tasty ideas for dipping and serving alongside your breakfast.

You may also want to serve these with some whipped cream, whipped topping, powdered sugar, and of course, fresh sliced fruits of all kinds. Any of these or a combination of them can be excellent with the bread and sausage pairing. 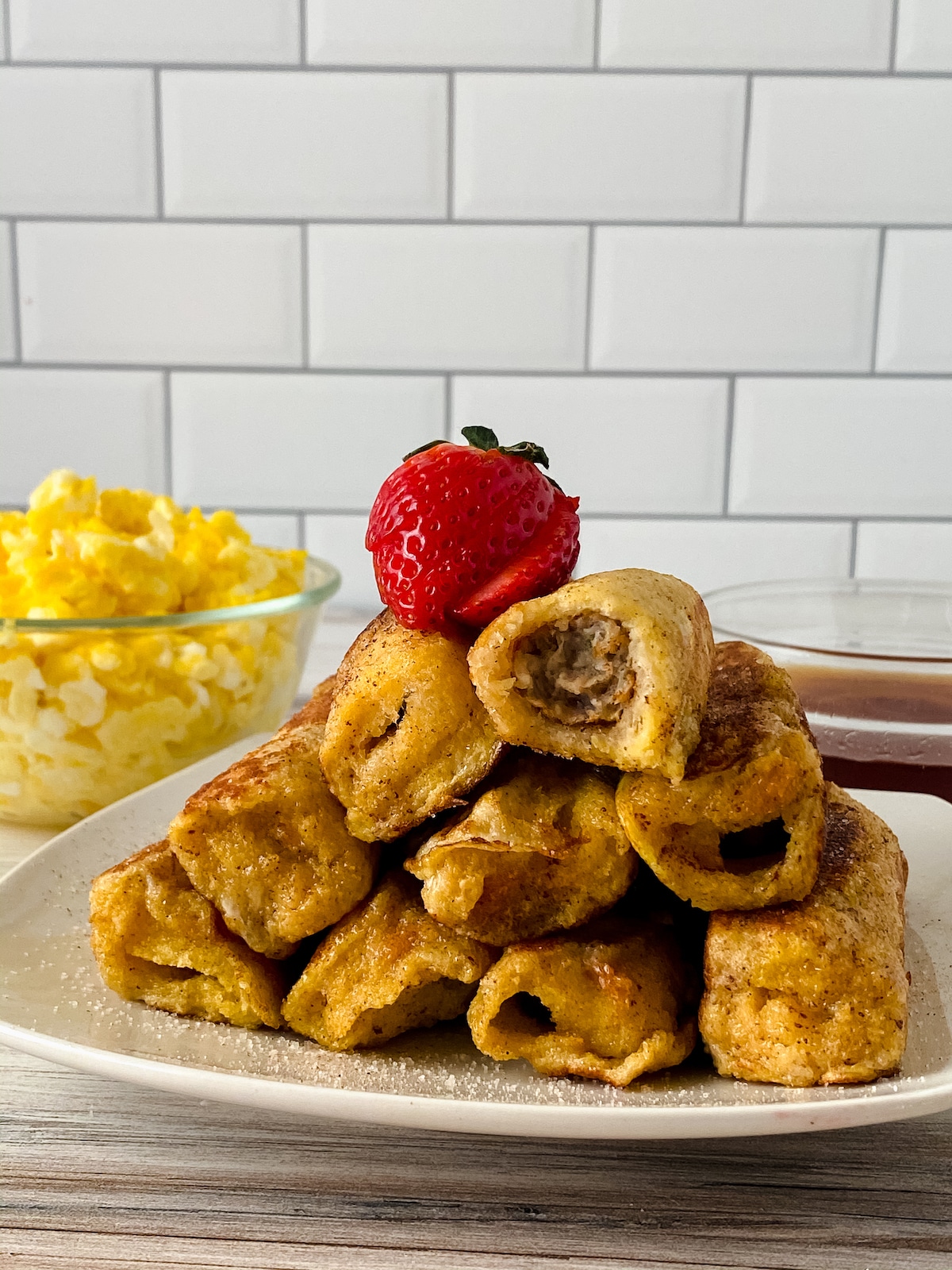 What Sausage Should I Use in My French Toast Roll-Ups?

For this version of French toast, you want a sausage link that will easily fit inside the rolled bread. In our house, we prefer using a turkey sausage or chicken sausage, but you might use pork or beef sausage. I've even seen some make this with homemade sausage, polish sausage, or even Lil Smokies. Use the type of sausage your family prefers, just make sure that it is fully cooked before you add it to the bread for rolling.

Why is My French Toast So Soggy?

The most common reasons French toast and roll-ups like this will end up soggy are due to the bread not being stale and the cooking temperature. Using stale bread makes sure the bread will soak up the batter but not stay overly moist. By cooking slowly over medium heat, you allow your bread to crisp on the outside but also cook through on the inside without the outside burning. This prevents that crisp outside and soggy center you may be experiencing. 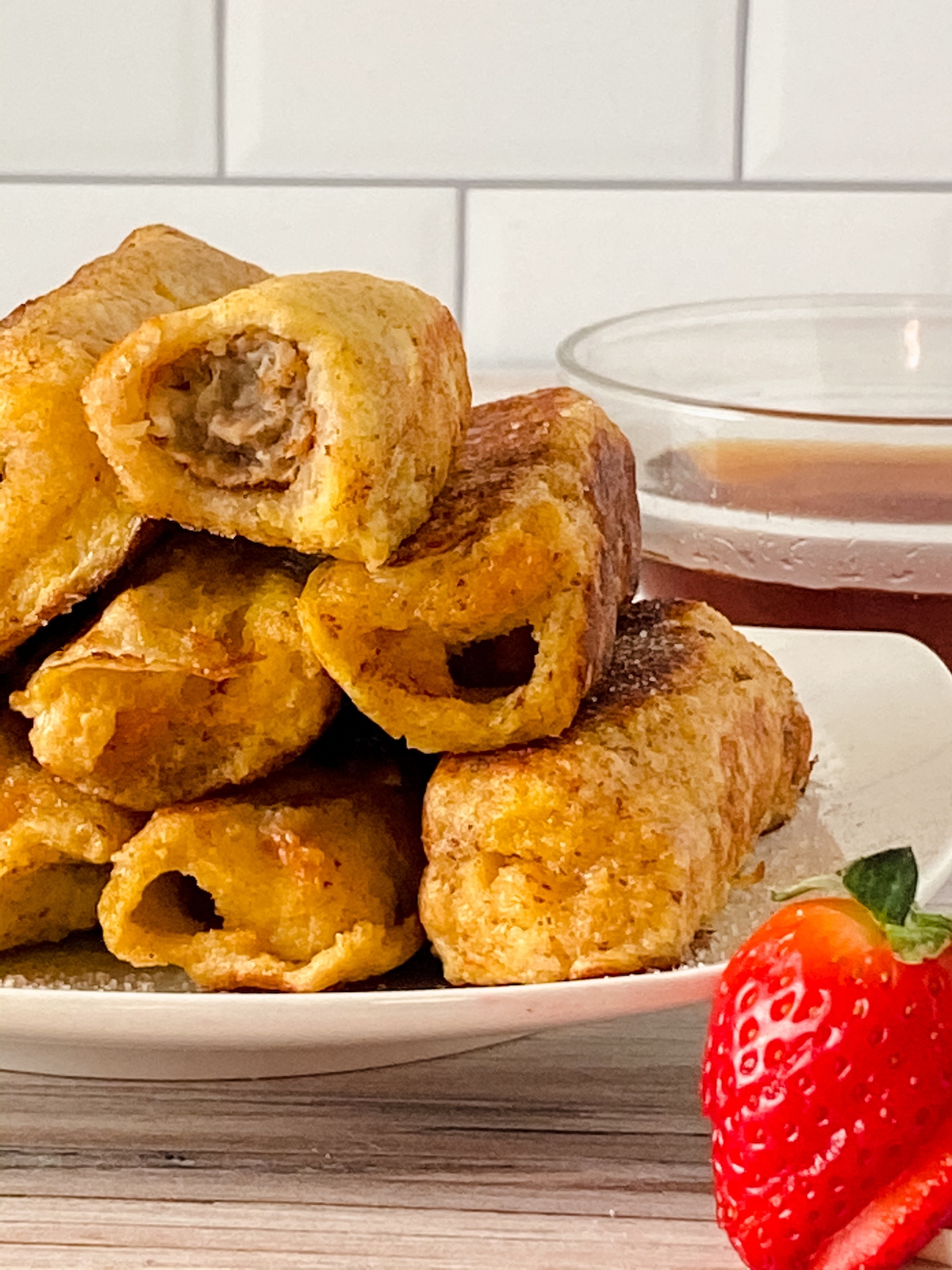 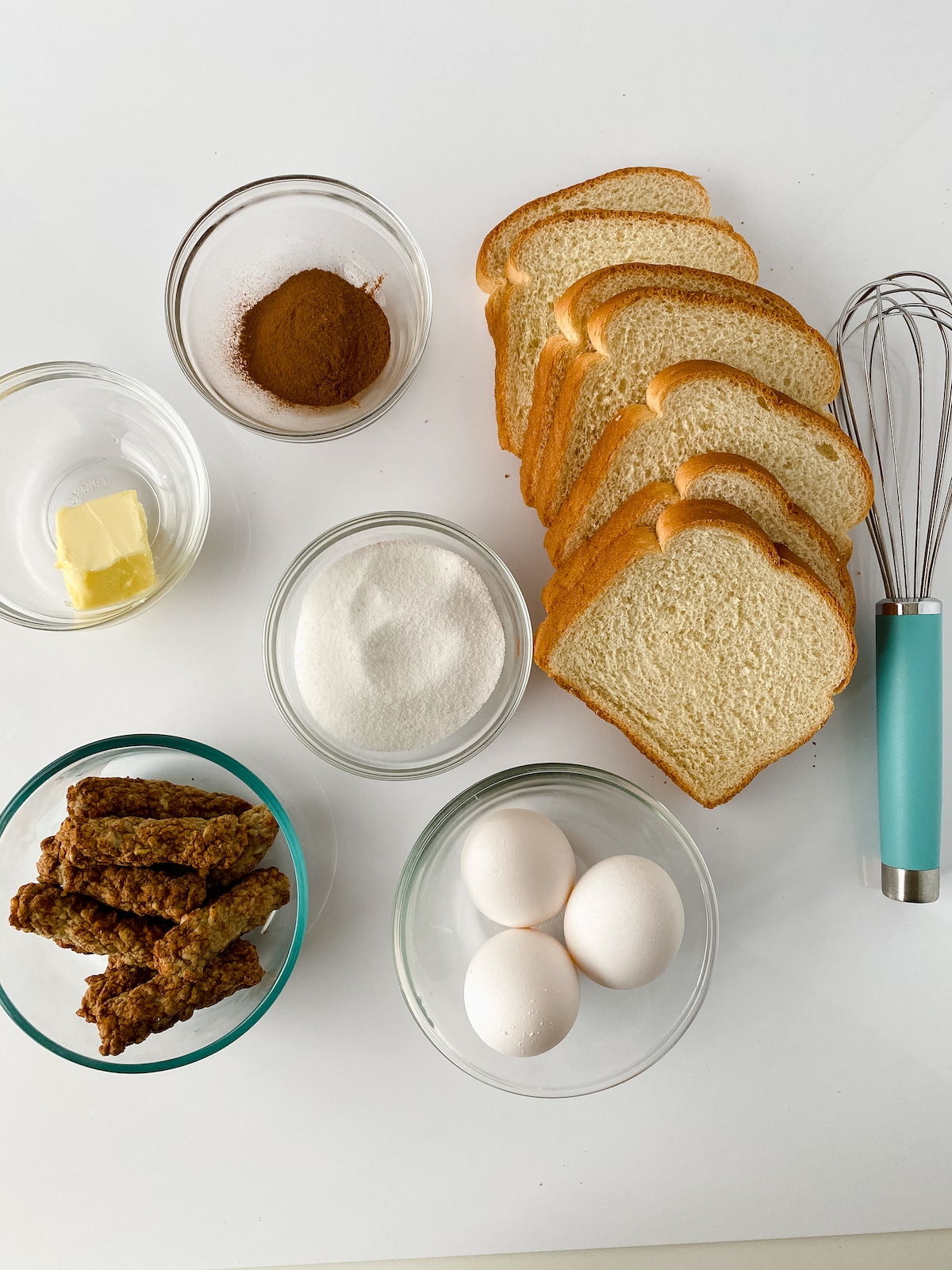 Cook or heat the sausage pieces until 160°F internally then set aside.

In a medium bowl, whisk together the eggs, milk, vanilla extract, cinnamon, nutmeg, and allspice until incorporated. Set aside. 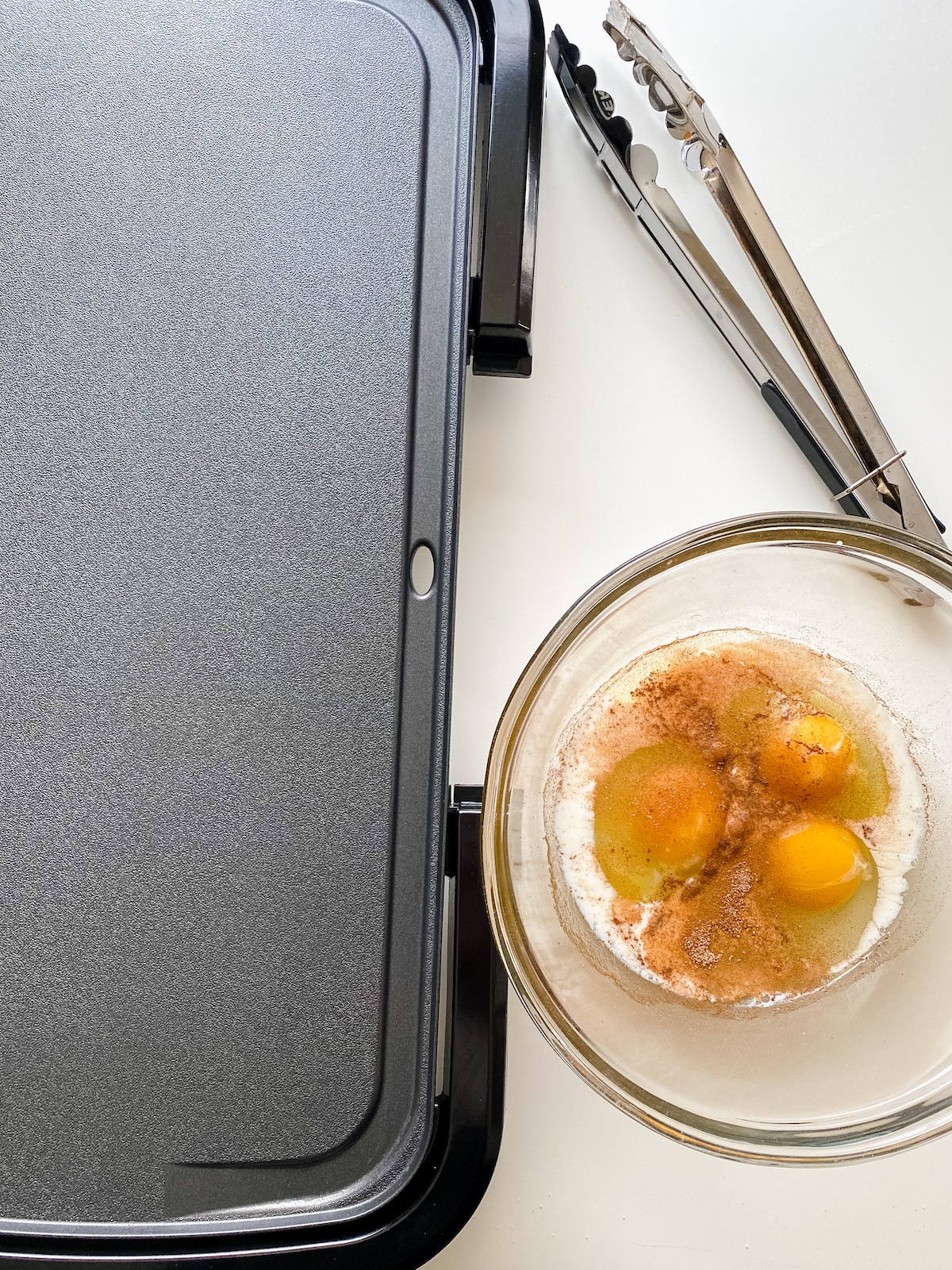 In a small bowl mix together the sugar and cinnamon then set aside.

Cut the crust off the pieces of bread.

Flatten each slice of bread with a rolling pin. 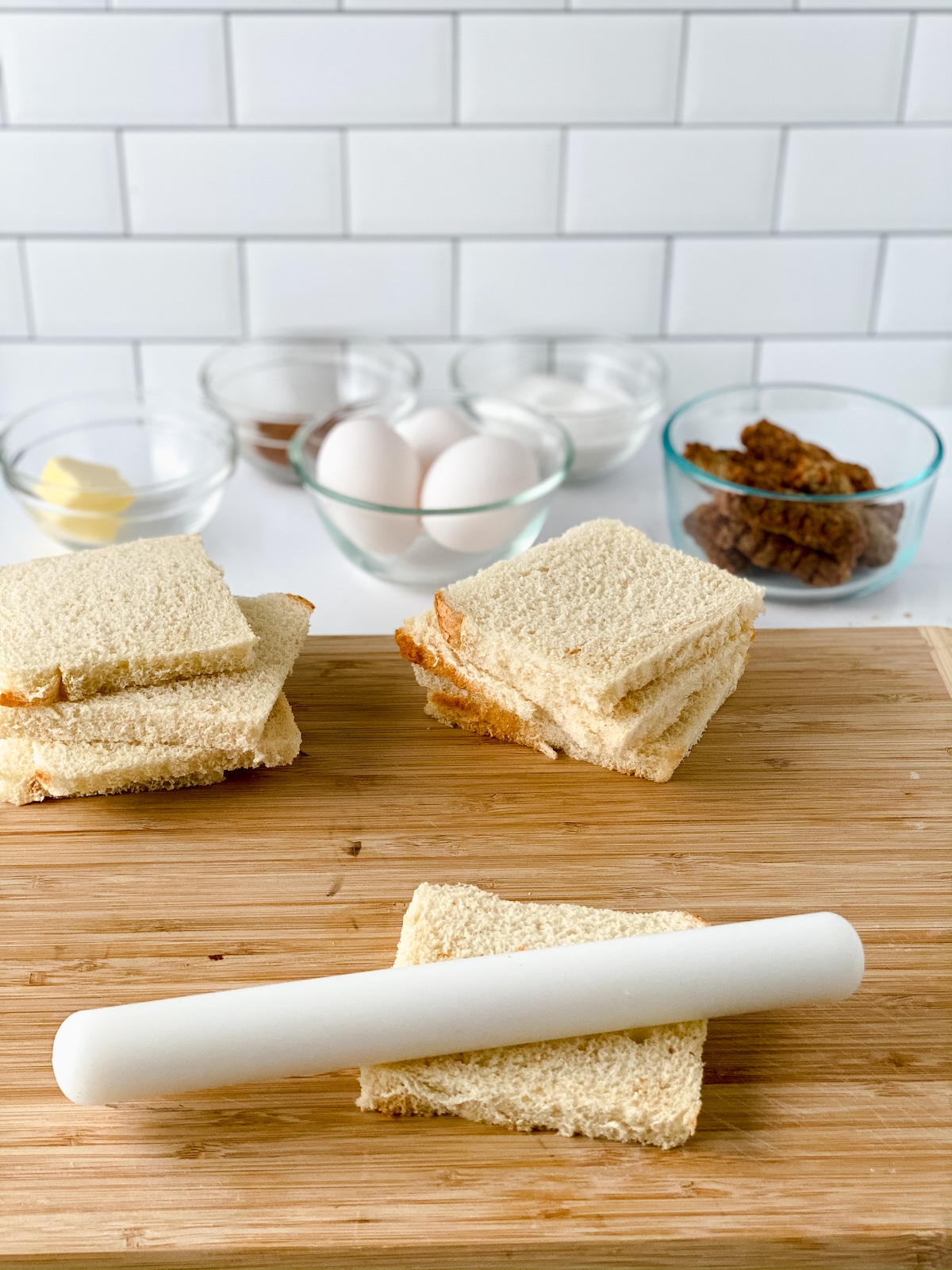 Spread the room temperature butter onto one side of each piece of bread.

Sprinkle the cinnamon sugar onto the buttered side of the bread creating an even layer. 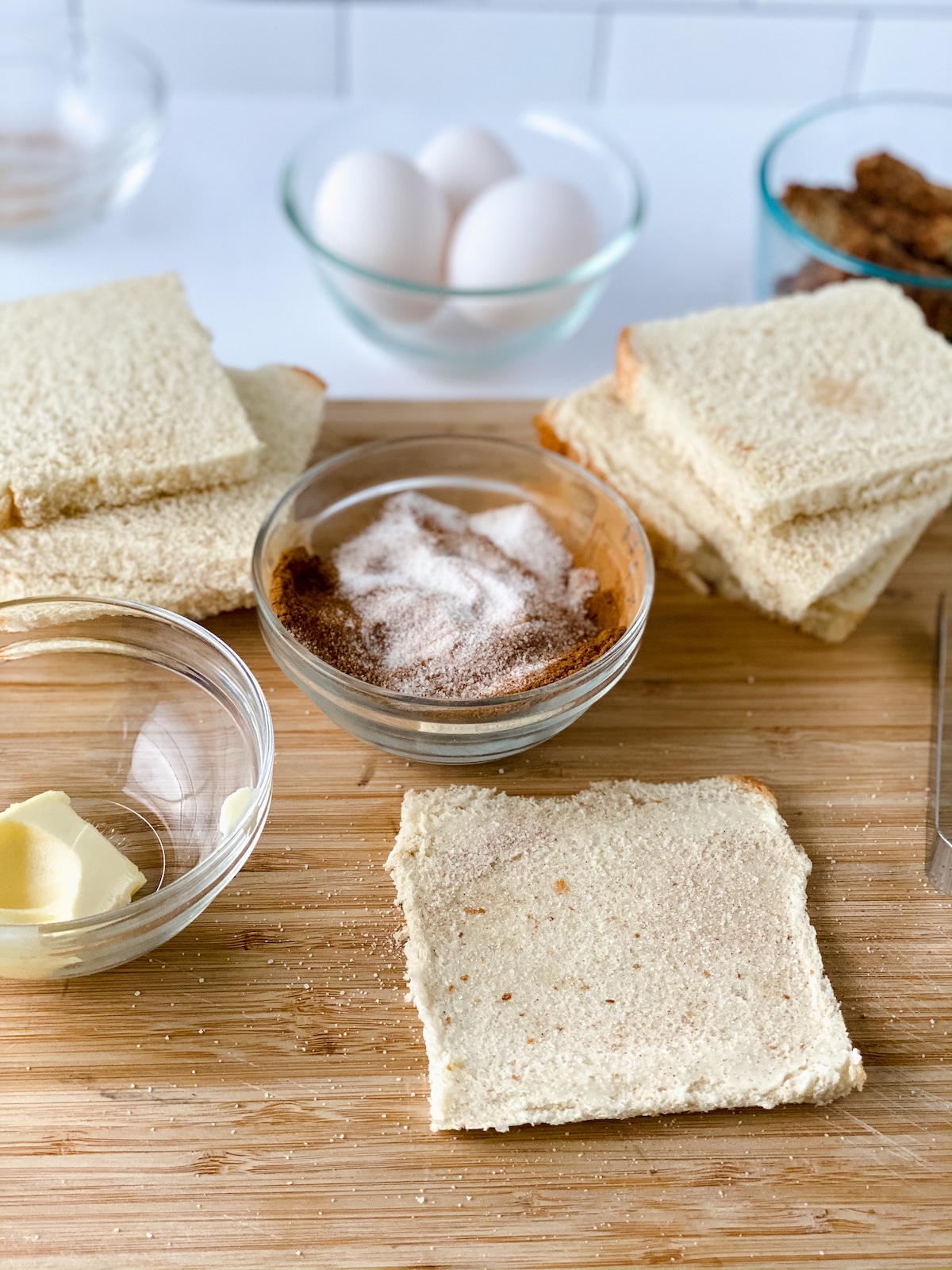 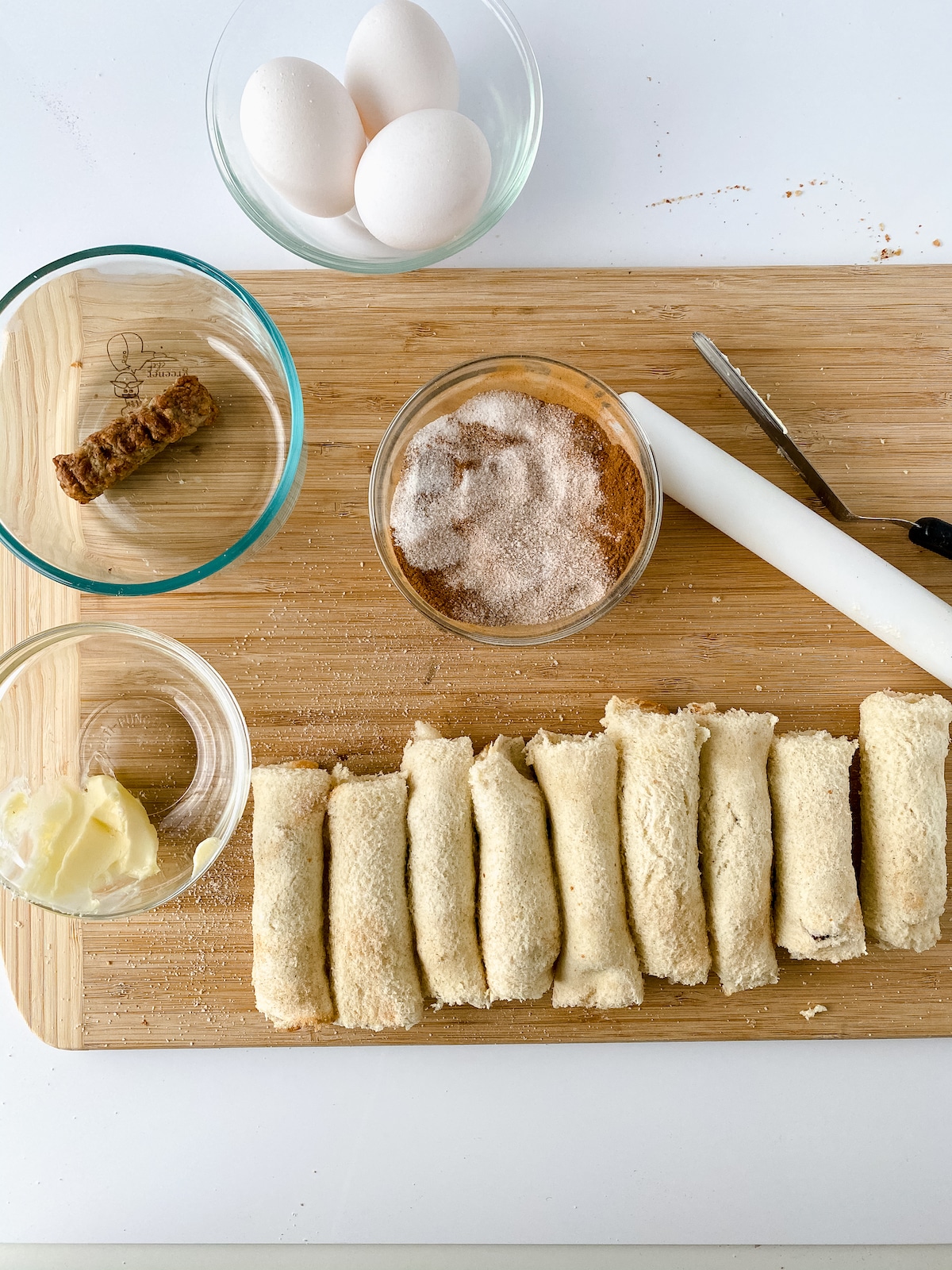 Pinch the ends of the bread together to seal and set aside seam side down.

Melt the butter in a large skillet or on the griddle over medium heat.

Dip the rolls into the batter, then place them onto the prepared griddle. 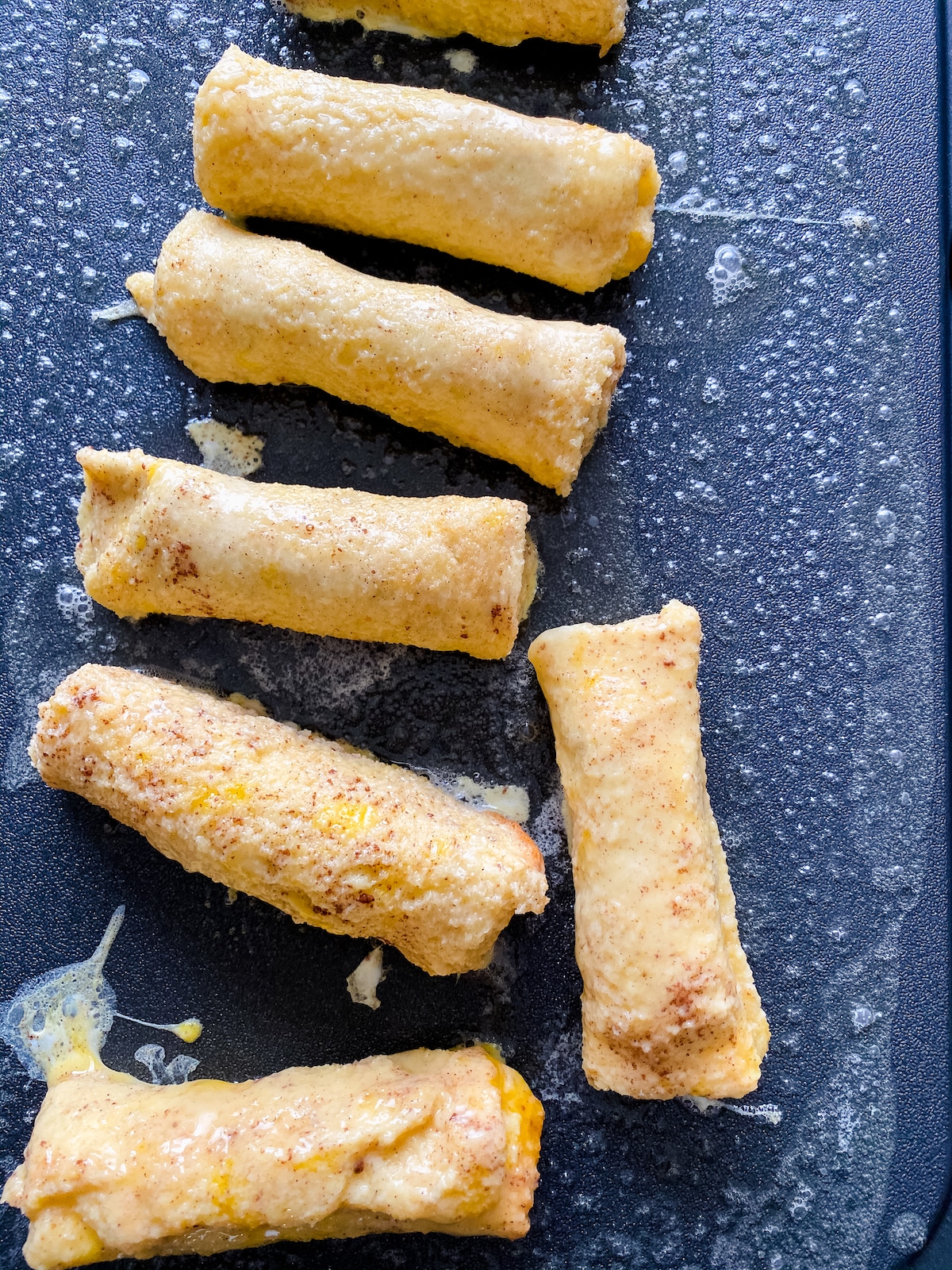 Cook for 2-3 minutes per side until golden brown and cooked through. 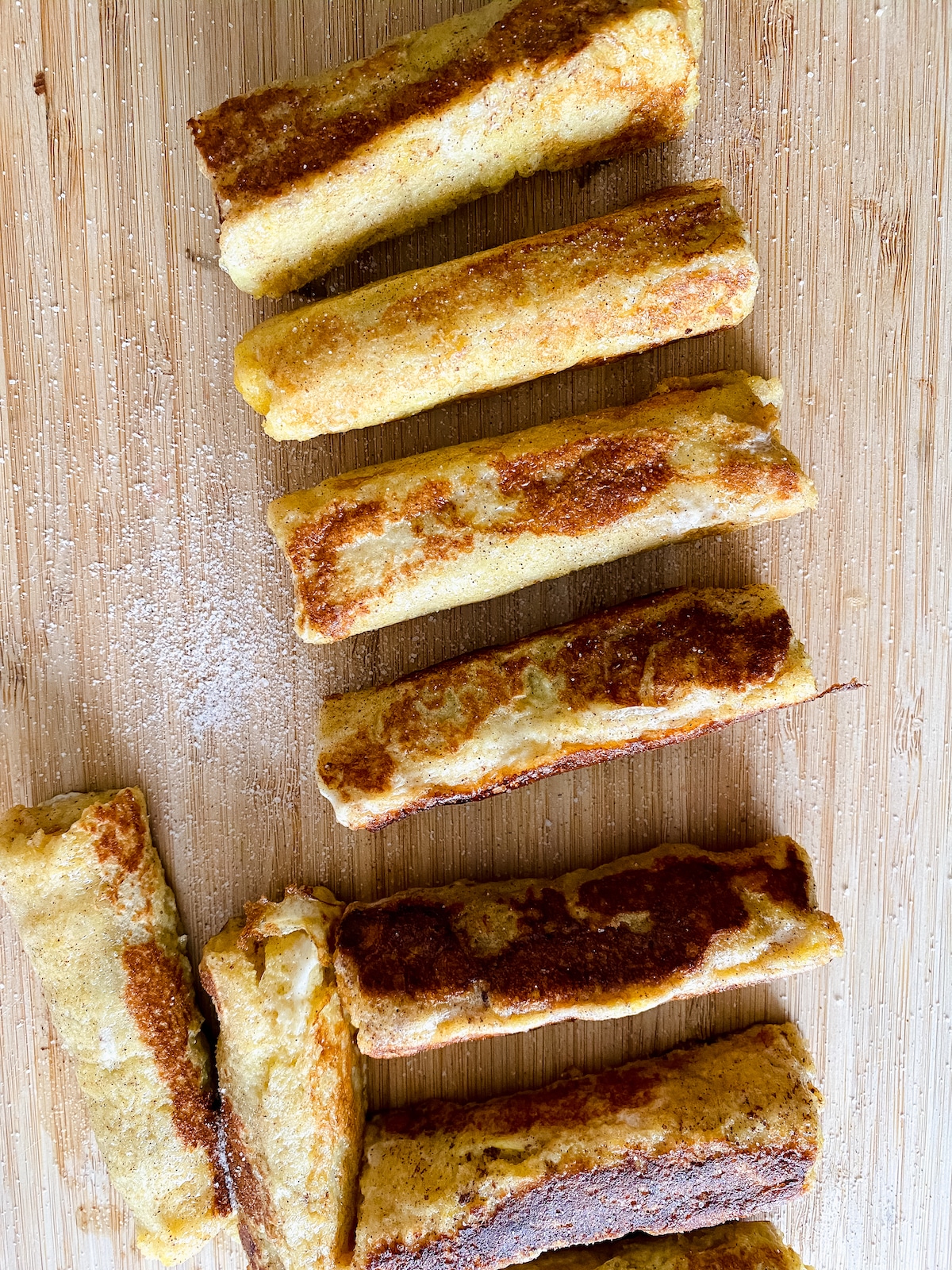 Serve with your favorite dipping syrup or toppings. 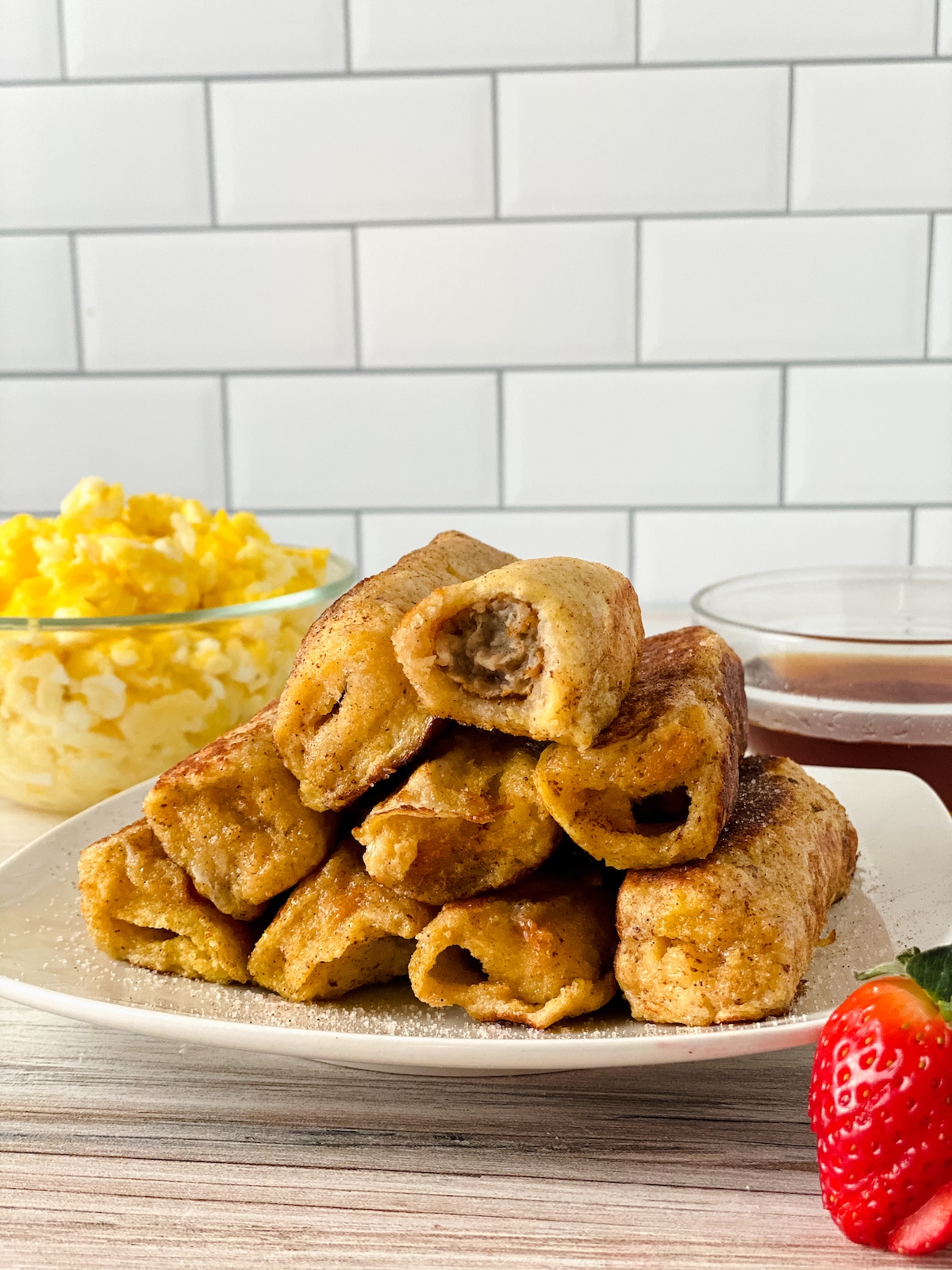 Since breakfast most often is considered the most important meal of the day, I always have great choices to share with you. We've made all sorts of sweet and savory breakfasts before, and below are just a few of our favorites that you can add to your meal plan.

Use pork, chicken, or turkey sausage depending upon your dietary preferences. 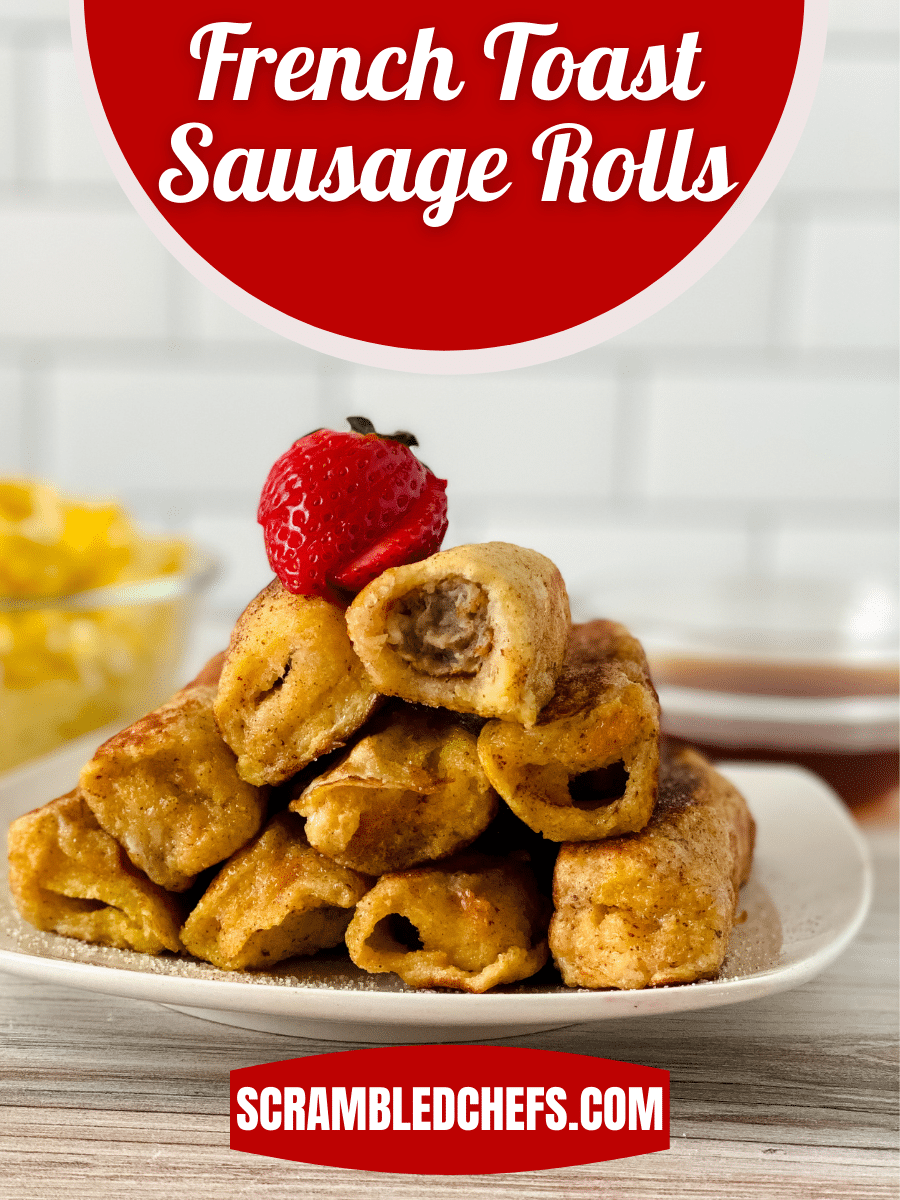