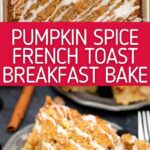 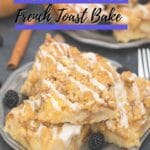 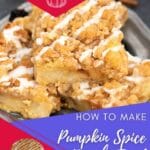 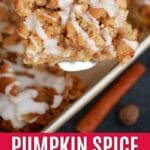 Pumpkin isn't just for those rich coffee drinks or pies. This pumpkin spice French toast bake is the ultimate in sweet delicious breakfast casseroles. With the richness of pumpkin spice and a light sourdough base, it's a perfect way to serve up French toast with much easier preparation. No standing over the stove for this breakfast! Plus, it's ideal for a fancy brunch at Thanksgiving!

The combination of an egg, milk and cinnamon coating on bread is what has always made French toast so good. It adds flavor, moisture to the bread, and a nice crispy coating on the outside. This bake option gives you all of this, plus the richness of pumpkin and spice. Plus, instead of standing over a stove frying each individual slice, this bake lets you mix things up in minutes, then pop into the oven to cook. An easy weekend brunch recipe you'll love.

If you want something similar without the pumpkin flavor, you might like this cinnamon French toast bread pudding recipe. It's more bread pudding than French toast, so is ideal for dessert, but still could fit a sweet breakfast need if preferred.

The best bread to use is one that is slightly stale so you can let it soak up plenty of that yummy custardy goodness. However, one of the best options specifically is sourdough. It has plenty of thickness and a bit of tang that really works well with the extra sweetness in this recipe. Below are a few others that you might like to use for a little different, but still delicious flavor.

What Do I Top Pumpkin French Toast With?

The best part of French toast is what you top it with! Even though it isn't traditional, the same goes for this yummy breakfast bake. While there is a nice crumble topping, you still want to serve this with a little something extra. Below are some ideas that are perfect alongside the pumpkin spice flavor of this breakfast.

What Goes with French Toast Bake?

A breakfast bake is often an all-in-one dish, but this sweeter option may be a meal you want to serve with something on the side. Whether it is a meat side or a bit of fruit, there are tons of ways to make this into a full meal that is satisfying and a delicious part of your menu.

Of course, my favorite way to serve this is alongside other savory and sweet items at brunch. It pairs great with a number of these sweet and savory brunch recipes if you want to build a full menu.

Why is My French Toast Bake Soggy?

If your bake ends up soggy even after baking the recommended time, there are two things that may be at play. The first issue is when there is not enough bread to custard ratio. The second is when it has not been cooked long enough.

This recipe, in particular, calls for 1 sourdough loaf of bread. Typically, this is 1 pound of bread or around 24 slices. If the loaf seems a bit smaller than average, you may want to reduce the amount of custard added to the bread. You will also want to make sure that when the custard is poured over the bread, it covers it but doesn't leave a ton of extra liquid around the bread. You want it to soak up the moisture, but not be swimming in the mixture.

If it seems undercooked once you have reached the recommended time frame, simply continue cooking in 5 to 10-minute increments. You want the center to be moist but not wet. You may also need to adjust the pan size so it is an even layer and not too thick at the center.

Cut the bread into 1" pieces and spread in an even layer into the prepared baking dish.

Pour the liquid mixture over the bread until completely covered, then cover with plastic wrap and refrigerate overnight.

In a small bowl, mix together the flour, brown sugar, cinnamon, nutmeg, and salt until combined well.

Add the butter to the flour mixture and stir or cut in until crumbly pieces remain. Cover and refrigerate overnight.

Sprinkle the crumbled mixture over the top of the French toast bake.

Drizzle the top of the baked casserole with a simple powdered sugar glaze if desired.

Slice into squares and serve alone or with syrup and whipped cream.

If you want to make your own pumpkin pie spice to use in this recipe instead of the individual spices, you can easily whip up a batch to keep on hand throughout the fall pumpkin season. Below is an easy recipe that works great for any recipe that has pumpkin as a key ingredient.

Optionally, you can add in 1 to 1 ½ teaspoons ground allspice in the mixture for a little extra hint of flavor. This blend can be stored in an airtight container for 2 to 3 months before use.

Can I Make This French Toast Bake Breakfast Casserole Ahead of Time?

Yes! Since it is an overnight breakfast casserole, you obviously will make this at least 4 hours prior to baking. You can make this up to 48 hours before baking and simply cover and store it in the refrigerator. It can also be prepared and wrapped then frozen for up to 3 months before baking. If frozen, simply thaw overnight in the refrigerator and then bake as directed.

If you love French toast, then you might also want to try some of our other great flavors and styles. Below are some fun ideas that make serving up this classic dish easier than ever. Make sure you pin, print, or bookmark your favorites on this list for your next breakfast or brunch!

Can be baked without the streusel topping if preferred.